After taking part in hands-on STEM lab experiments as part of a youth science program I coordinate, Latino and Black students were more likely to picture scientists as people who look like them – and not stereotypical white men in lab coats.

My colleagues and I recruit undergrad and graduate STEM majors to teach lab experiments at seven schools in Los Angeles. About 2,400 students in grades two to five receive 20 hours of instruction each year. Over 80 percent of the students are Latino, and about 13 percent are African American.

We wanted to get a sense of whether the program increases the kids’ interest in science, as well as whether it changes how they view scientists.

To do so, we used an evaluation tool based on the Draw-A-Scientist-Test created by educational researcher David Wade Chambers in 1983 which assessed kids’ preconceived notions of what scientists look like. Researchers later developed a checklist for the drawings that includes certain characteristics like gender, age, race and being in a laboratory.

When our program began collecting drawings of scientists from its participating students in 2015, 90 percent of the pictures were of white men in lab coats, often looking like Albert Einstein. About 10 percent of the students did not know what a scientist is or does.

This was demonstrated by students who wrote “I don’t know” or drew question marks on their drawings. 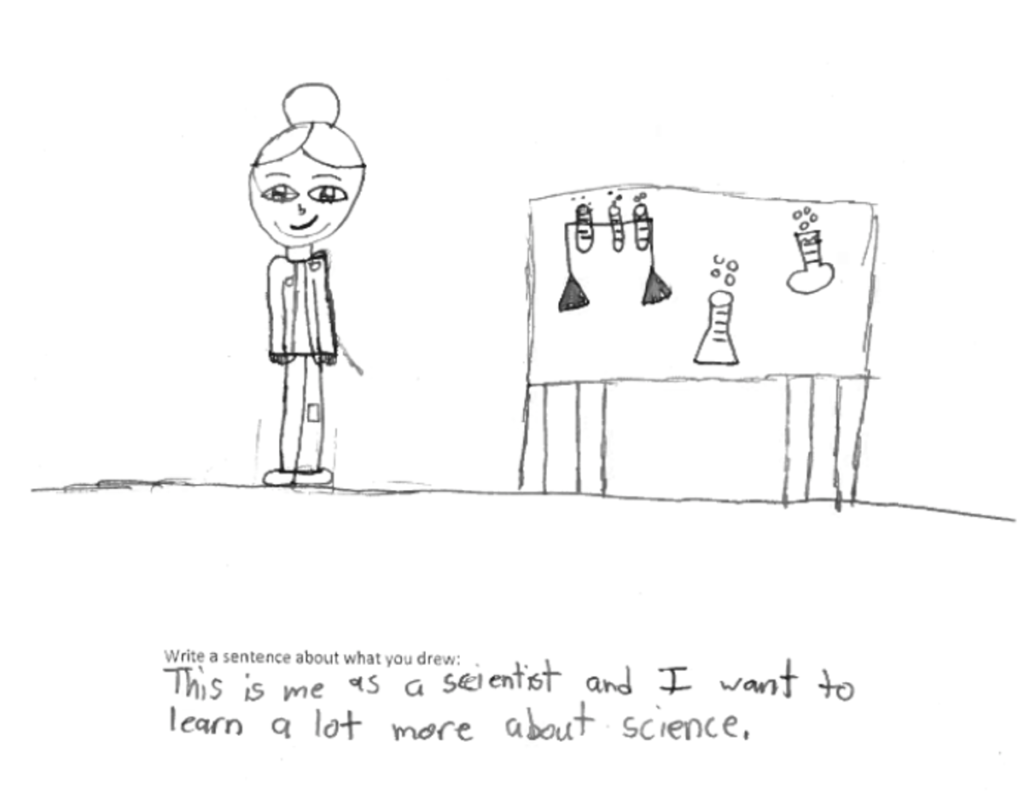 The drawings have become more diverse over time, which we attribute to a gamut of reasons including hiring more diverse teaching staff and incorporating more examples of scientists of color into our programming.

These increases in students who drew themselves or scientists of color, though perhaps seemingly small, are significant. They demonstrate that the students are developing and internalizing an identity of becoming a scientist.

Black workers make up only 9 percent of the STEM workforce, and Latino workers represent 8 percent, though they are roughly 13 percent and 19 percent of the U.S. population, respectively. Similarly, Black and Latino undergrad and graduate students are less likely to earn STEM degrees than white and Asian students.

Without diversity in the STEM fields, it’s harder for students of color to see themselves as future scientists. Research shows a more diverse scientific community would likely lead to more innovation, better health care, more supportive academic spaces and a greater trust in science, just to name a few benefits.

We hope that students who finish the Young Scientists Program continue to pursue STEM and go on to become scientists themselves. However, that data is not available, and we are unable to track the graduates. We do have one former participant and four other community students who are STEM majors who are now on staff and teaching science in the community where they grew up. This epitomizes the goal of our program.

To change students’ preconceived notions of scientists as being white and male, it’s important they experience diverse science teachers, are taught about scientists of color in history and see diverse characters in science-related children’s books. Its our hope to see more of the students in our program drawing scientists of color or themselves as scientists in future drawings.

Dieuwertje J. Kast is the director of STEM Education Programs of the Joint Educational Project at USC Dornsife College of Letters, Arts and Sciences. She wrote this piece for The Conversation, where it first appeared.

Pa. lawmakers must protect and expand our sacred right to vote | Opinion

Endangered species to get a reprieve under Biden administration plans