If you’re a regular reader of this space, then you know we’re big fans of charts and data visualizations.

So, as the Legislature returns to work this Monday morning for a backbreaking schedule of six session days spread over the next two weeks, and perhaps even discusses a minimum wage hike for Pennsylvania workers, we stumbled across a bit of data that might help illuminate debate.

Pennsylvania, which hasn’t raised its $7.25/hr. minimum wage for nearly all that time period, finished in the middle rank of states for salary growth, with an average rate of 25.34 percent, the Comparisun analysis shows.

Pennsylvania, which saw its average salary rise from $44,381 to $55,628 over the last decade, finished 21st in the nation, according to the Comparisun data. That put the commonwealth ahead of all its neighboring states.

That could provide fodder for critics of the Democratic Wolf administration’s plan to raise the state’s minimum wage to $15 an hour by 2025. Pennsylvania lags all its neighboring states with its minimum, which is tied to the federal rate. Delaware’s minimum wage rose to $9.25 an hour on Oct. 1.

Opponents of a wage hike have argued that it’ll be a job-killer and end up reducing hours for other workers.

A March analysis by the state’s Independent Fiscal Office indicates that the number of workers who would benefit from a wage hike is larger than the ranks of those who could be adversely impacted. Similarly, the economic benefit of a wage hike also outweighs the potential adverse impact.

In an Oct. 7 letter to Rep. Jim Cox, R-Berks, the IFO estimated that “1.08 million workers that previously earned under $12.00 per hour (referred to as “directly affected” workers in the analysis) would receive a higher wage and retain employment,” the letter reads.

“The analysis assumed that another 826,000 indirectly-affected workers earning between $12.00 and $14.99 would also receive a modest average pay increase of four percent. Overall, the incremental income gain for all workers that benefit from the policy change is $3.87 billion,” the IFO’s Matthew Knittel wrote to Cox, adding that his office’s analysis “estimates that 34,100 positions would be eliminated through a combination of layoffs, a slower pace of hiring and leaving vacant positions unfilled. The wage income reduction for those workers is $363 million.”

Public support for a wage hike, meanwhile, remains strong. A June poll by the progressive State Innovation Exchange found nearly two-thirds of Pennsylvanians (62 percent) either ‘strongly’ or ‘somewhat’ in favor of raising the wage to $15/hr. over the next five years.

Our Stuff.
One of the big reasons for the Legislature’s abbreviated session this month is the Nov. 5 general election, where voters will cast ballot for a host of local and county offices, a proposed constitutional amendment, and some statewide judgeships. As we’ve always said, there’s no such thing as an “off-year” election, so our latest Voters’ Guide, ably compiled by Stephen Caruso and Elizabeth Hardison, will get you smart, fast on these very important fall contests.

In case you missed it, Hardison was in Lebanon County on Saturday, where local Republicans named their pick for the 48th Senate District seat formerly held by Mike Folmer. Democrats huddled on Sunday to name their choice for the Jan. 14 special election. Folmer resigned in September after being arrested on child pornography charges.

Caruso takes a look at why the Pa. Health Department has collected just 160 fracking-related complaints in a decade, while the Department of Environmental Protection has fielded thousands of complaints in the same time period.

You’ll find a trio of solid stories from our partners at the Philadelphia Tribune: A visiting bishop called attention to South Sudan’s humanitarian crisis; Philly officials are teeing up a land transfer to revive a mothballed rec center in North Philadelphia, and after last week’s not-guilty verdict, a Philly bike courier’s family has been facing racial threats.

On our Commentary Page, opinion regular Dick Polman says the heroes of the impeachment saga all notably have something in common. And two University of Michigan researchers say the anti-overdose drug Naloxone is a life-saver. So why aren’t more people carrying it?

Addenda: The Pennsylvania District Attorneys Association had some thoughts about an ACLU report taking issue with the profusion of duplicative charges in the crimes code. They had this response to Elizabeth Hardison’s story last week:

“The ACLU’s persistent and tired tactic of ignoring crime victims and public safety to advance its goal of eroding confidence in prosecutors is troubling.  Even more troubling is that the ACLU has decided to ignore gaps in the law and changes in technology that make victims of domestic violence and sexual exploitation vulnerable to significant harm and injury. We prefer to deal in truth and facts.” (Read the full statement here.)

2020 Dem candidate Pete Buttigieg drew 1,000 people to Reading Terminal Market in Philadelphia on Sunday, the Inquirer reports.
The 2020 candidates have spent only a ‘trickle’ in western Pennsylvania, the Post-Gazette reports.
PennLive goes deep on the 2020 contenders who are converging on the state this week.
A fire in Allentown on Sunday destroyed 10 row homes and left dozens homeless, the Morning Call reports.
Inconceivably, it’s been a year since the Tree of Life shootings. The Tribune-Review looks back.

Flick of my completed mural in #harrisburgpa thanks to @scenesfromthesidewalk just after finishing the final details. So thankful to @sprocketmuralworks for the support with this project. This wall went super smoothly- even with the rain, I was able to get the wall wrapped in just over 2 days. Paint- @montanacans . . . . . . . . #harrisburg #harrisburgpa #sprocketmuralworks #eyes #muralart #mural #avatar #ribbons #spraypaintart #montanagold #streetart

Some Pa. school superintendents say cyber-charter schools are really a way to hide from child welfare authorities, WHYY-FM reports.
PennDOT is ‘reviewing’ a Trump administration request for drivers’ license data, WESA-FM reports.
PoliticsPA has last week’s winners and losers in state politics.
Roll Call looks at the week ahead as Congress returns to work this week.

You Say It’s Your Birthday Dept.
Belated best wishes go out to LancasterOnline’s Stephanie Sadowski, who celebrated on Sunday. Best wishes go out this morning to longtime Friend O’the Blog, Andy Enders, of Harrisburg, and to PennLive’s Travis Kellar, both of whom celebrate today. Congrats all around.

Heavy Rotation.
Here’s an absolute classic from Edwyn Collins. From 1995ish, It’s “A Girl Like You.”


Monday’s Gratuitous Hockey Link.
Winnipeg squeaked out a 1-0 win over visiting Edmonton in a shootout on Sunday night. 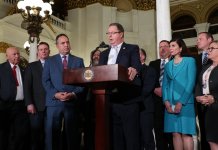 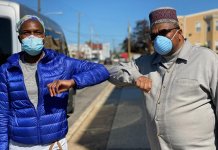