A coalition of progressive advocacy groups rallies on the Pa. Capitol steps to call for better funding for public schools, a higher minimum wage, and other items in the 2019 state budget. (Capital-Star photo by John L. Micek)

Gov. Tom Wolf and his allies on the left may have left the budget playing field last month without winning the first-in-a-decade increase to Pennsylvania’s $7.25 an hour minimum wage. But they’ve hardly abandoned the fight.

Last month, Wolf’s aides vowed to press on for a wage hike. And while the administration has said it’s open to any increase to the wage, progressive activists still have their eyes on a singular prize: A $15 an hour minimum. Wolf, you’ll recall, wanted to to increase the wage to $12/hr starting this month, and then to $15 by 2025.

On Wednesday, one of those groups, the Pennsylvania Budget & Policy Center,rolled out its latest argument for a higher minimum wage, releasing not one, but two, briefing papers arguing the case that a $15/hr minimum’s effect on safety net programs and the state’s Child Care Works program wouldn’t prompt a ‘cliff’ in benefits.

“A minimum wage increase to $15/hour by 2025 will result in 2.01 million Pennsylvanian workers receiving a raise, which is 34 percent of the state’s workforce.

“We find that the vast majority of workers who would receive a wage increase from a $15 minimum wage would not experience any sort of benefits cliff. Most of the major public benefits programs provided by the nation or state are structured as gradual phase-outs, so as workers earn more their benefits are gradually tapered off and their taxes are gradually increased.

We’ll summarize each report below.

First up, the safety net:

“In Pennsylvania, raising the minimum wage to $15 is not going to lead to a “benefits cliff” because, as data from the Economic Policy Institute shows, most low-wage workers in Pennsylvania who would benefit from a minimum wage increase are single or married adults without dependent children (76 percent), and 55 percent work 35 hours or more per week,” the briefing paper reads.

“Childless adults are categorically ineligible for the Child Tax Credit, Children’s Health Insurance Program (CHIP) and Women, Infants and Children (WIC)—and many workers with full-time (or close to full-time) hours generally earn too much to qualify for an Earned Income Tax Credit (EITC) while Supplemental Nutrition Assistance Program (SNAP) benefits are so low that losing them has little effect on total income.

“Thus, the majority of Pennsylvania’s low-wage workers have few benefits to lose as their wages increase. Because of the Affordable Care Act, Pennsylvania has been able to expand Medicaid, and heavily subsidized health insurance is available on the healthcare marketplace/exchange,” the briefing paper further argues. “So, many low-wage workers will continue to receive Medicaid as their wages increase. When Medicaid is no longer available, premium costs for a silver plan remain relatively low.”

The latter paragraph seems a little shaky given the fact that a three-judge panel in New Orleans just heard oral arguments on a Texas case that, if successful, would have the Affordable Care Act declared unconstitutional.

And while the final battle over that case will take place in the U.S. Supreme Court, one of the chief casualties would be the Medicaid expansion authorized by the Affordable Care Act.. That sadly renders the argument there optimistic – but one can always hope for the best.  And, if nothing else, it’s a strong argument for preserving and saving the 2010 healthcare law that’s benefited millions of people nationwide. 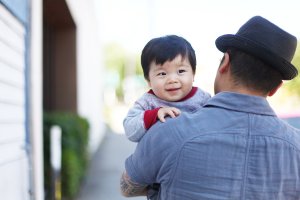 “Approximately one quarter (24 percent) of workers affected by a $15 minimum wage in Pennsylvania are parents of dependent minors.

“These parents and their children are eligible for the Child Tax Credit, and some of them may also be eligible for other public assistance programs like the EITC, SNAP, child care subsidies, WIC, and CHIP (children’s health insurance).

These working parents may be vulnerable to the loss of benefits as their incomes increase. However, most of these workers end up better off, all things considered, as the benefits they may lose are more than offset by an increase in earnings.

Of all the scenarios we examined, there is only one in which raising the minimum wage from $7.25 per hour to $15 per hour might result in a net loss in income—a family in which two parents hold full-time minimum wage jobs and have two or more kids in full-time child care.

But …  few families fall into this category and there may be ways for those that do to mitigate the benefit cliff. There are also a few scenarios in which [eventually] increasing the minimum wage from $12 to $15 might actually reduce the net income for families with children.”

Next up, that child care benefit cliff:

The program is open to state residents who work more than “20 a week; work 10 hours and train or go to school for 10 hours or more a week, or have a promise of a job that will start within 30 days of their application for subsidized care,” the report notes.

Not everyone eligible for care receives it, but for those who do, it’s a big deal. And that’s because the subsidy is “critical to helping parents take jobs who could not otherwise afford child care. The program also seeks to provide very high quality care that can help children be better prepared for school. It is funded by both the state and federal government and is managed by the Early Learning Resource Center in each county under the supervision of the state Department of Human Services,” PBPC boss Marc Stier writes in the briefing paper.

The bottom line, according to Stier, is that child care subsidies for people earning a $12/hr minimum wage would “remain substantial,” even after an increase in copays for childcare because of the higher wage. At $15 an hour, copays would rocket up, by more than three times, but subsidies would still remain substantial and families would not be cut off from access to care, the paper argues.

The paper concludes by recommending that lawmakers consider policy changes in childcare and other programs to mitigate any adverse effects from a wage hike. But the bottom line remains that a higher wage would lift more families out of poverty, without any measurable “benefits cliff.”

Caruso also has this brief, but highly interactive, piece on all the WAMs buried in the Fiscal Code. Yes, they’re in there. Our thanks to our friends at the Commonwealth Foundation for their usual yeoman’s work in ferreting them out every year.

Speaking of DePasquale, he teamed up with Sen. Andrew Dinniman, D-Chester, on Wednesday, to release an audit of the Keystone Exam, and to call on the state to replace it with the SAT as a measure of high school progress.

On our Commentary Page, Pennsylvania’s takeover of the Obamacare marketplace was a great idea, but it’s only the first step to improving access to healthcare, Penn State public policy guy Simon F. Haeder argues. And hundreds of cities have water systems just as troubled as the one Flint, Mich., but we never hear about them, another scholar argues (look for the Pittsburgh data contained within).

Elsewhere.
The Inquirer takes a look at the phenomenon known as ‘prison gerrymandering,’ which counts inmates where they’re incarcerated for Census purposes, and not in their hometowns. Our earlier piece, by Stephen Caruso, is also worth your time.
A tuition freeze has forced the state System of Higher Education to change the way it manages its money, PennLive reports.
That tuition freeze is the first one in two decades, the Post-Gazette notes.
Pittsburgh attorney J. Nicholas Ranjan has been confirmed as a federal judge, the Tribune-Review reports.
The former president of Muhlenberg College has stepped down as the head of the board that oversees the special taxing district in downtown Allentown, the Morning Call reports.

WHYY-FM takes stock of the Spring 2019 session of Philadelphia City Council: What got done, what didn’t.
The Tamaqua schools in Schuylkill County have dropped plans to arm teachers, Keystone Crossroads reports.
Some of the Democratic prez hopefuls will hit NetRoots Nation in Philly this weekend, PoliticsPA reports.
Stateline.org looks at the security of voting machines being peddled by third-party vendors.
Politico explains why, in the age of Trump, being a state governor (or an ex-governor) is no longer the surest path to the White House.

What Goes On.
Nothing – not a thing. But it is Free Slurpee Day at 7-Eleven, according to Bob Caton. So …  uhhh … road trip?

What Goes On (Nakedly Political Edition).
After a respectable, post-budget hiatus, the fundraising machinery grinds back to life. Those robocalls don’t pay for themselves, bubbala.
5:30 p.m.: Reception for Rep. Mike Reese
5:30 p.m: Reception for Rep. Valerie Gaydos
Hit both events, and give at the max, and you’re out a mere $2,000.

You Say It’s Your Birthday Dept.
Best wishes go out this morning to Tuesdays with Toomey activist Alissa Packer, who celebrates today. Congrats and enjoy the day.

Heavy Rotation.
Here’s one from Billie Eilish that isn’t ‘Bad Guy.’ It’s ‘You Should See Me in a Crown.’

Monday’s Gratuitous Soccer Link.
The Guardian has every moment of the USWNT’s Victory Parade through the Canyon of Heroes in New York City on Wednesday. It was exactly as cool as you’d think.