Even as COVID cases rise, half of all state residents say employers should not be able require them to get the jab

(Image via The Philadelphia Gay News).

Pennsylvanians are sharply divided over employer vaccination mandates, with 50 percent saying employers should not be able to require their employees to get the jab, according to a new Morning Call/Muhlenberg College poll.

Forty-nine percent of the poll’s 419 respondents, who were surveyed from Nov. 15 to Nov. 22 by the Allentown-based school, said employers should be able to require their workers to get vaccinated against the virus. The poll has a margin of error of 5.5 percent.

Nationally, a third of voters say they agree with the Biden White House’s Jan. 4 employer vaccination deadline, according to a Nov. 10 Morning Consult poll.That mandate, however, is currently tied up in court amid a blizzard of litigation, NPR reports.

When it comes to another bitterly contested issue of the pandemic — school mask orders, a solid majority of the poll’s respondents, 60 percent, agree that public school students should be required to wear masks.

The Wolf administration’s mask mandate remains in place as the Democratic administration and Republicans in the General Assembly fight out the policy in state Supreme Court.

But, respondents gave poor marks to Gov. Tom Wolf and President Joe Biden for their respective management of the pandemic.

Biden’s numbers have slid since last March, when 55% of Keystone State adults approved of his handling of the pandemic. Just 40 percent of respondents said the same thing in the new poll.

More Pennsylvanians disapprove (44%) of Wolf’s handling the pandemic than approve (35%) of his performance, the poll similarly found. Republicans have spent months lacerating the Democratic governor over his shutdown orders and other policies that they say are executive branch oversteps. 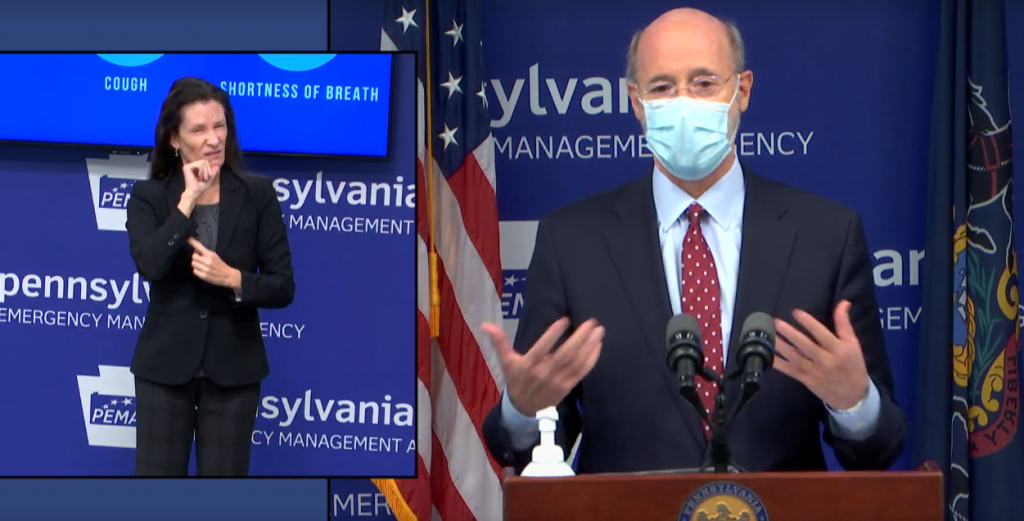 Nearly 6 in 10 Republican (59%) respondents told Muhlenberg pollsters that they believe getting vaccinated presents a major health risk, compared to 20% of Democratic respondents, and 28% of independents.

Despite those divisions, nearly 6 in 10 of all respondents (59%) say that people who have refused to get vaccinated have put others at risk and helped to prolong the pandemic, pollsters concluded.

And of the adult Pennsylvanians who have been vaccinated, more than three-quarters (76%) said they had gotten a booster shot, or planned to get one, the poll found.

Our Stuff.
The builder of a controversial pipeline will be required to repair a state park in Chester County that it polluted more than a year ago with drilling fluid, according to a settlement the Wolf administration announced Monday. Stephen Caruso has the details.

To help transform what became a symbol of anti-Semitism in the United States into a source of hope and remembrance, Pennsylvania has awarded Pittsburgh’s Tree of Life synagogue $6.6 million in state funds for redevelopment, Marley Parish reports.

In a deadly year, an infusion of $3.6M in state grant money will aid Philly’s gun violence prevention efforts, our partners at the Philadelphia Tribune report.

In today’s edition of Helping the Helpers, our partners at the Uniontown Herald-Standard highlight the efforts of the Fayette County Community Foundation.

On our Commentary Page today, opinion contributor Michael Coard reflects on the 90th anniversary of a horrific lynching, and its historic reverberation. And addressing healthcare racism against Black women is key to ending the U.S.’ HIV epidemic, a Columbia University expert writes.

Elsewhere.
Philadelphia winters aren’t as bad as you think – the Inquirer looked at 130 years of data and reached some interesting conclusions.

Westmoreland County has passed a grim milestone: 1,000 deaths since the start of the pandemic, the Tribune-Review reports.

Coca-Cola workers in the Lehigh Valley have walked off the job to protest pension and health care issues, the Morning Call reports.

On Pearl Harbor’s 80th anniversary, the Citizens’ Voice profiles a local man who perished in the attack.

Roll Call examines the ‘outsized’ role that courts will play in this year’s round of redistricting.

What Goes On
11:30 a.m., Capitol Steps: School funding rally (this event may have been canceled)
12 p.m., Main Rotunda: Virtual lighting ceremony of the Capitol Christmas tree

Philly health officials and leaders answer monkeypox… by Special To The Capital-Star August 4, 2022
Pa. officials stress safety, necessity of COVID jab for… by John L. Micek July 22, 2022
3 poll numbers that should scare Democrats. And 3 that… by John L. Micek February 17, 2022