PHILADELPHIA —  Philadelphians will be happy to know that this is not the only city where misbehaving police officers are rewarded with larger paychecks.

When Constantin Tsachas was in charge of about 100 police officers assigned to the Brooklyn subway between 2012 to 2015, he told various officers who are now plaintiffs in a federal lawsuit that white and Asian people are “soft targets,” that some were stopping “too many Russians and Chinese,” and that “you should write more Hispanic people,” especially those brazen enough to commit low-level crimes such as jumping the turnstiles.

It earned him the nickname “David Duke” in uniform. However, it also earned him a promotion to second-in-command in the borough in 2016.

You know what Tsachas also got? Blind loyalty from his superior. Accused of pushing racial quotas in arrests, then-NYC Police Commissioner William J. Bratton said of Tsachas, “I have full faith and support in him.”

Sounds a little familiar, right? After all, the promotions by acting Philadelphia Police Commissioner Christine Coulter of Thomas Tolstoy and Cindy Caine from officers to sergeants and Edward Pisarek from sergeant to lieutenant — all of them white, all of them accused of some type of misconduct — earlier this month is still a fresh wound for those here who have wearied of the racial discrimination and sexual harassment lawsuits that have become all too synonymous with the city’s police.

Tolstoy is among four narcotics officers accused of lying about evidence on search warrants and stealing from corner stores during raids over a decade ago.

He also was accused of sexually assaulting two women during those raids. The city was still forced to pay out $227,000 to two women he allegedly groped.

Caine was arrested in Florida earlier this year when she “forcefully pushed” a Pinellas County sheriff’s officer and was charged with a single count of battery on a law enforcement officer.

The charge against Caine was dropped — I’m told by a reputable PPD source that intensive lobbying on her behalf from Philadelphia Fraternal Order of Police Lodge No. 5 may have helped significantly — but do you really want to elevate someone photographed in an orange prison jumpsuit just a few months later?

Pisarek was not only one of the 320 officers exposed by the Plain View Project for making racist, sexist and threatening social media posts, but he’s also had four citizen complains lodged against him over the last five years.

Well, that doesn’t matter, either. He’s also receiving a significant boost in base salary from the $87,707 he took home in 2018. This doesn’t include the $26,000 he made in overtime, and it is unknown whether he spent some of his working time liking the Facebook posts of other racists cops.

Of course, the thread here is that these officers climbing the ladder to larger salaries and more robust pensions in spite of their gutter policing practices is that they are white. Find me an African-American commanding officer in Brooklyn instructing his charges to hunt down and arrest Hasidic Jews and I’ll show you an ex-cop, not a promoted one.

New York and Philadelphia are not the only cities where people are having issues and seeing lawsuits associated with controversial police promotions; many cities do — all while there are Black police officers with good records who are not getting promoted.

In Murfreesboro, Tennessee, where no African-American officers have been promoted since 2014, officer Christopher Williams has filed a federal lawsuit against the city and Police Commissioner Michael Brown alleging that “MPD has pervasive and discriminatory policies and practices to keep African Americans from promotion within the Department.”

And in Kansas City, Kansas, 12-year-veteran Z’Lontate Womack just filed a federal lawsuit against the Unified Government of Wyandotte County for race and gender discrimination, something the lawsuit says is “rampant in the department.”

It says so much about racial division that Black cops are suing for opportunities that they say they are being denied due to their color while white cops with questionable pasts are receiving them with not even a blink of an eye.

Last week, state Sen. Anthony Williams questioned the wisdom of promoting officers who may “lack the necessary judgment” required to police a diverse community such as Philadelphia.

But if recent events prove anything, this is a problem that extends way beyond our city.

Capital-Star opinion contributor John N. Mitchell is a reporter and columnist for the Philadelphia Tribune, where this piece first appeared. 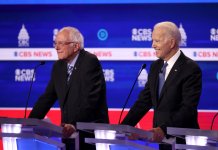 2020: The year of the coronavirus presidential campaign? | John A. Tures

Coronavirus cases in every Philly ZIP code; city to use Liacouras...