It’s pretty much a given that Pennsylvania’s presidential primary this year will once again come too late to influence the race to any great degree.

Only a major gaffe or unthinkable surprise will prevent Joe Biden from winning the Democratic presidential nomination against U.S. Bernie Sanders, I-Vt.

If the former veep doesn’t have the nomination wrapped up by the time Pennsylvania votes on April 28 (a date now in doubt because of the COVID-19 outbreak) it will happen shortly afterwards.

However, while the race appears a foregone conclusion, that doesn’t mean there won’t be a lot of interest in its outcome. That’s especially true when it comes to Biden’s chances of beating President Donald Trump in Pennsylvania this fall.

Trump fooled all the experts in 2016, beating Democratic presidential candidate Hillary Clinton by 44,000 votes in Pennsylvania. In doing so, Trump became the first Republican to win Pennsylvania since George H. Bush in 1988.

The victory was all the more surprising after Clinton’s big win over Sanders in Pennsylvania’s 2016 primary election.

Clinton solidly beat Sanders 55-43 percent. According to newspaper stories, she won the white vote 51-47, (68 percent of the electorate), the African-American vote 70-30, 19 percent of the electorate), women 60-39, and voters over the age of 45, 66-33, She also swept all income and educational attainment levels except for whites without college degrees. Sanders won that group by a 50-49 margin.

It all came on the heels of her winning Pennsylvania’s Democratic Party presidential primary over Barrack Obama in 2008.

However, Clinton’s victory in Pennsylvania was short-lived as Trump won  56 of the state’s 67 counties, including former Democratic Party strongholds in Southwestern and Northeastern Pennsylvania.

Clinton did win Pittsburgh and Philadelphia along with affluent suburbs of Philadelphia but the margins there weren’t enough to offset Trump’s crushing victories in the rest of the state.

More than likely Trump picked up the 345,506 votes captured by Ted Cruz and the 310,003 votes garnered by John Kasich in Pennsylvania’s GOP presidential primary. But then, somehow, he picked up an additional 1.5 million voters in between the primary and general elections.

One interesting note was that Trump won by a 54-37 margin among voters who made their minds up in the last week prior to the election.

Another major factor will be the votes being cast for others running for president. Green Party candidate Jill Stein captured 49,941 votes. It’s pretty safe to say that most of those votes would have gone to Clinton and perhaps she would have won the election if the Green Party hadn’t fielded a presidential candidate.

It’s a little more murky for supporters of Libertarian Gary Johnson who finished third with 146,715 votes. His backers would probably be split between Republicans and Democrats if there wasn’t a libertarian candidate on the ballot. It will be interesting to see how many votes candidates for either of those parties will get this fall and what effect that will have on the election.

In the end, while Biden is definitely the favorite for the primary election, the general election will be much tougher for him. Given Clinton’s struggles in 2016, it’s clear that Biden will have to work extremely hard to win Pennsylvania. And whether he wins Pennsylvania or not will probably determine if he’s our next president.

Opinion contributor Mark O’Keefe, of Mechanicsburg, Pa., is the former editorial page editor of the Herald-Standard, of Uniontown, Pa. His work appears biweekly. 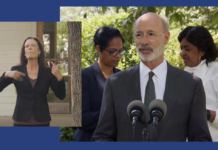 Pennsylvania’s primary is now officially irrelevant. But it may tell us much about November | Mark O’Keefe