Pa. within reach for Biden: 3 things to know about Election 2020 | Friday Morning Coffee

Here’s a look at the electoral map nationwide: 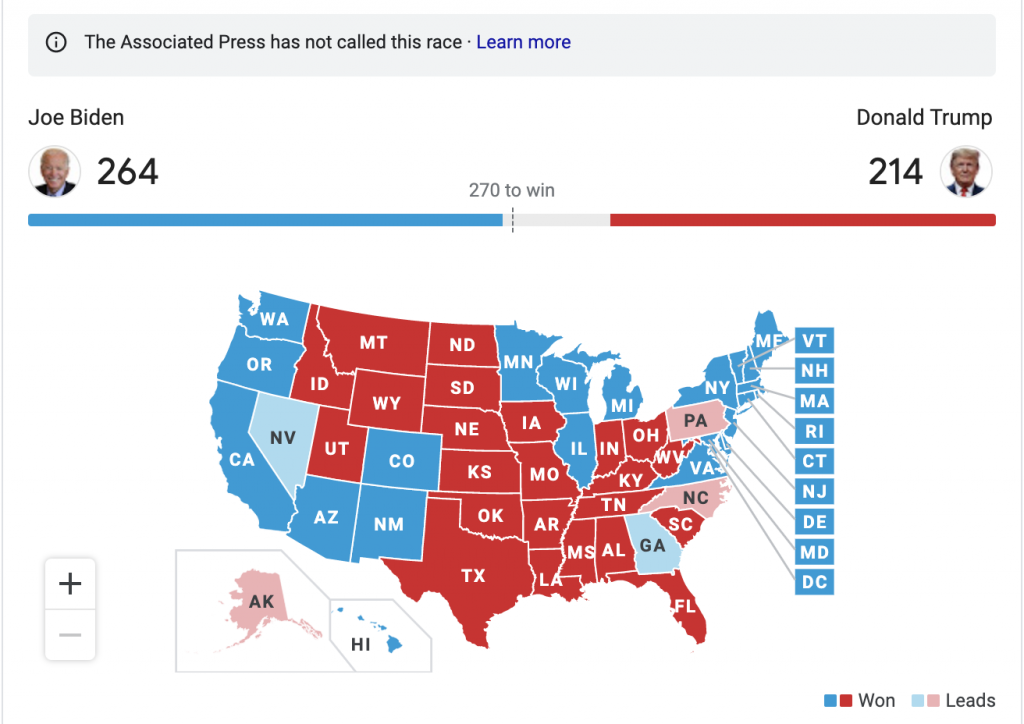 And here’s a look at how things look in Pennsylvania:

So here are three things that we know so far about what’s happened, and what to expect today:

1. As the Capital-Star’s Stephen Caruso reported on Thursday, officials in Allegheny County expect to start counting more than 30,000 ballots today which require particular attention. That stems, as WESA-FM’s Chris Potter’s noted, from a situation where some 29,000 voters in the western Pennsylvania county were sent the wrong ballots and had to be sent new ones. As Potter further observes, there’s nothing nefarious about what’s going on here. Officials are just being thorough and making sure there aren’t any mistakes.

2. As evidenced by the tightening margins between Trump and Biden in the Keystone State, predictions that the mail-in balloting was expected to break Biden’s way is holding fast. Biden has recaptured two of the counties that Trump flipped in 2016: Erie and Northampton counties. Trump was the first presidential nominee since 1984 to carry the northwestern Pennsylvania county, GoErie reports. Trump beat Hillary Clinton back then by 1,957 votes. Going into Friday morning, Biden led Trump 66,966 votes to 65,647, GoErie reported, citing unofficial results from the Erie County Board of Elections.

3. Despite Trump’s baseless assertions during a White House press conference on Thursday, there is no evidence of fraud among the millions of mail-in ballots that have been cast nationwide. Nor are election workers “finding” votes for Biden in the Keystone State or anywhere else, as Trump asserted without evidence during his rambling, falsehood-riddled address. MSNBC broke away from Trump after his first sentence began with a lie. Fox News stayed with the entire news conference. We fact-checked the news conference in real time. You can find it on our Twitter feed.

Our Stuff:
You can continue following the Capital-Star’s live coverage of the ongoing vote count. That will resume this morning, and we’ll be following developments throughout the day.

Some highlights:
Philadelphia police were investigating a plot to attack the Pennsylvania Convention Center where the vote-counting was taking place, Cassie Miller reports.

U.S. District Judge Paul S. Diamond, who presided over a hearing on a Trump-filed lawsuit in Philadelphia on Thursday, is ‘Night Court’-level funny.

Our Hearken Election SOS Fellow Kenny Cooper, with an assist from Miller, runs down the post-election timeline in Pennsylvania.

On our Commentary Page this morning, a Penn State/Erie scholar runs down the history of America’s most contentious contested elections.

Elsewhere.
Once again, it looks like Pennsylvania will determine the entire ballgame. The Inquirer has its own updates on the latest developments in the Keystone State.
Republican Sean Parnell is refusing to concede to U.S. Rep. Conor Lamb, D-17th District, arguing (see if this sounds familiar) that he wants every ‘legal’ vote counted, the Post-Gazette reports.
The Morning Call takes you inside the final, frenzied hours at Lehigh County’s vote-counting headquarters.
A Luzerne County committee discussed election-related issues on Thursday night, the Citizens-Voice reports.
The neighbors of the late Walter Wallace, Jr. tell WHYY-FM that they have solutions to the systemic problems his death at the hands of city police laid bare.
An official at Mount Nittany Health Center in Centre County talks to WPSU-FM about an increase in COVID-19 hospitalizations.
Politico looks at the failure of polling in the 2020 contest.

Now that all the colorful leaves are gone, the snow can start to do its magic anytime now!

You Say It’s Your Birthday Dept.
Belated best wishes go out to PennLive’s Steve Ibanez and Courtney Highfield at the LeTort Trust, both of whom celebrated on Thursday.

Heavy Rotation.
On this most American of days, here’s a custom-crafted playlist of that most American artist: Bruce Springsteen. This one contains our personal favorites.

Friday’s Gratuitous Soccer Link.
The Guardian has what you need to know about this weekend’s FA Cup and Premier League action.

Pa. within reach for Biden: 3 things to know about Election 2020 | Friday Morning Coffee

Thirteen men died after going to the Allegheny County Jail.… by Special To The Capital-Star March 15, 2022
A year after the Jan. 6 Capitol riot, election review and… by Marley Parish January 6, 2022
Trump’s fake electors: Here’s the full list by Kira Lerner February 1, 2022