Pa. out front: How the argument over reparations is moving into state capitols | Friday Morning Coffee

We first reported back in June that state Rep. Chris Rabb was drafting legislation that would both provide reparations for descendants of African slaves and provide some redress for the ensuing centuries of institutional racism.

And while Rabb, a Philadelphia Democrat, has begun seeking co-sponsors for his legislation, and researching the best way to go about reparations, he’s found himself a part of a larger national conversation about America’s original sin. And it’s one that is moving from Washington D.C. to state capitols across the country,

As our colleagues at Stateline.org report this week, lawmakers in four states, California, Texas, New York, and Vermont, have each introduced separate reparations proposals. Each are states that outlawed slavery after the Civil War — or never allowed it in the first place. 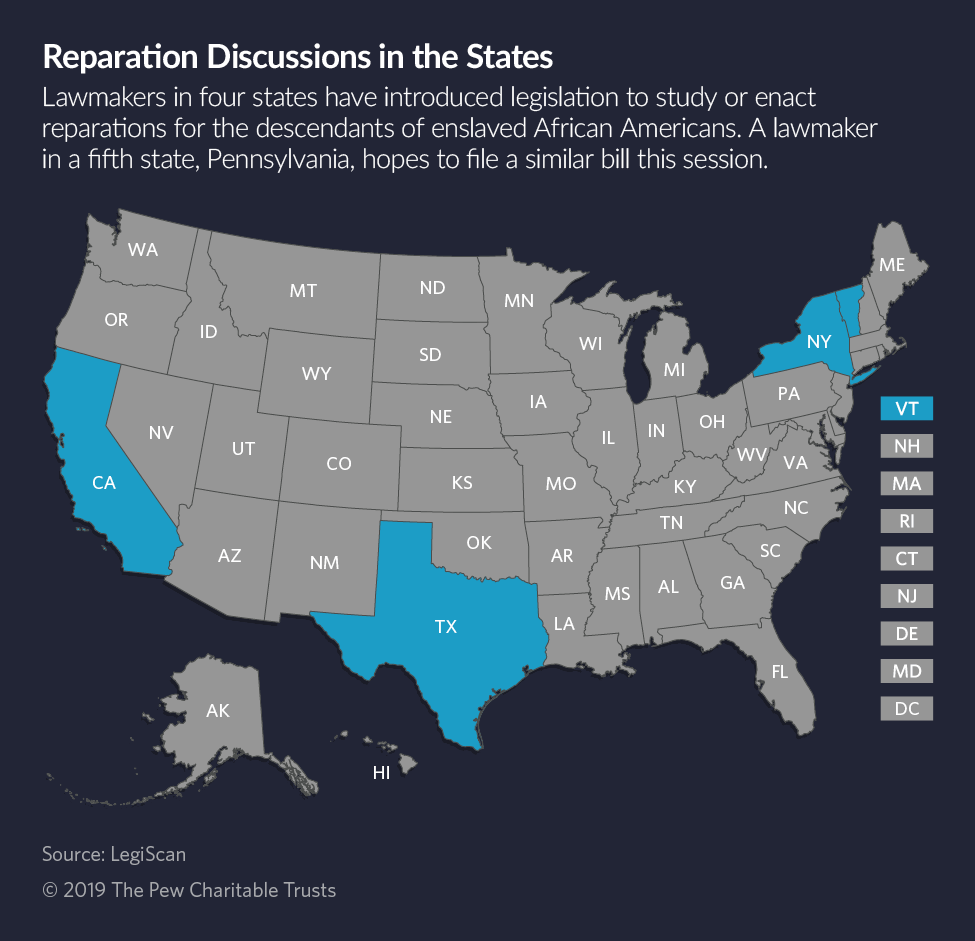 It’s certainly going to be a while — if ever — before any of these laws get on the books in their respective states.

Nonetheless, the conversations have been given new energy, as lawmakers have become increasingly aware of slavery’s long-term implications for such issues as criminal justice reform, education, and the wealth gap. In addition, increased hate crimes activity nationwide over the last few years has also helped to drive awareness, Stateline reported.

“I’m surprised to see the action going on at the state level,” Thomas Craemer, an associate professor of public policy at the University of Connecticut, told Stateline. He became interested in reparations because of the history of the Holocaust and the postwar reparations program in his native Germany, Stateline reported.

“Suddenly reparations has hit the mainstream,” Craemer told Stateline. The academic is part of a national team of experts organized by Duke University professor William Darity, charged with crafting a proposal outlining the argument for reparations, and how they would be implemented,

Critics of the state-level efforts, however, argue the issue should be handled by the federal government. And they’re not sure how the proposals would be paid for and who would qualify for payments, Stateline reported.

As Stateline notes, “Talk of reparations has cropped up again and again since the Emancipation Proclamation. As the Civil War was nearing an end, Union leader Gen. William Sherman wrote an order setting aside land confiscated along the southeastern coast for the formerly enslaved — the promise of ’40 acres and a mule’ — only to have it reversed by President Andrew Johnson following President Abraham Lincoln’s assassination.”

But even among supporters, there’s no clear agreement on what reparations should look like — and whether states should have a role.

“The culpable party is the United States government,” Duke University’s Darity, who is black, told Stateline. “They created the legal and authority structure to allow for these atrocities.”

In a Sept. 3 interview with the Capital-Star’s Stephen Caruso, Rabb had an entirely different perspective.

“Slavery was not a federal law, it was a state law,” Rabb said at the time. “What state you were born in decided whether you were fully human or property.”

Rabb is a descendant of both slaves, and those who did the enslaving. As Stateline reports, that is a situation fairly common among African-Americans, most of whom are mixed-race because of slavery’s legacy of rape.

“I descend from some of the wealthiest white enslavers in U.S. history,” Rabb told Stateline. “I feel a responsibility. I represent the best and worst of this country.”

Speaking to Stateline, Rabb suggested that his reparations would take the form of tax credits, rather than a cash payout. He’s also eyeing an “opt-in entitlement program” for eligible participants, Stateline reported.

Even if the bill fails, Rabb told Stateline, he will consider it a success.

“Sunlight is the greatest antiseptic,” Rabb said. “What’s polluting our discourse is ignorance and bigotry. We’re putting sunlight on history. This isn’t opinion. This is fact. Here’s what happened.”

Our Stuff.
Stephen Caruso leads our coverage this morning with an in-depth look at Gov. Tom Wolf’s plan to move Pennsylvania into a regional cap-and-trade program.

A day after a judge cleared the path, a state lawmaker from Philadelphia has introduced legislation that would block safe injection sites in his hometown, Elizabeth Hardison reports.

Members of one of Pennsylvania’s most powerful unions are calling for an ICE detention center in Berks County to be shut down, Caruso also reports.

From our partners at the Philadelphia Tribune, City Council is looking at scrapping fines and debts at the Free Library of Philadelphia.

What Goes On.
12 p.m., Capitol Media Center: The Dept. of Health holds a newser on what it’s doing to stop vaping-related lung injuries.

Heavy Rotation.
And this one’s by request: Here’s Pennsylvania’s own The Menzingers, with the hugely appropriate, ‘America, You’re Freaking Me Out.’

Friday’s Gratuitous Hockey Link.
Our beloved Carolina Hurricanes not only opened the 2019-20 season with a win (defeating Montreal 4-3 in a shoot-out at home on Thursday night), they brought back the post-game Storm Surge celebration. And there was much rejoicing.

Pa. out front: How the argument over reparations is moving into state capitols | Friday Morning Coffee