Our GOP activist U.S. Supreme Court is assaulting the separation of church and state | Opinion

Here’s the history of James Madison, freedom of religion, and freedom from religion in America

Replica of the United States Bill of Rights, documenting the 10 amendments to the US Constitution (Getty Images).

American politicians fear-mongering over moral and religious decline, and advocating for state sponsorship of religion, is as old as the founding of the Republic.

The key original battle took place in Virginia between “Give me liberty, or give me death,” Patrick Henry, an astute political opportunist who opposed the U.S. Constitution, and the “Father of the Constitution” James Madison, its principle author and shepherd.

Madison out-argued and out-maneuvered Henry. Henry’s proposal to tax all Virginians to finance Christian churches and preachers was popular when he first introduced it in November 1784, but it was left by the state General Assembly to die by the winter of 1785, after Madison was through with it.

In June of that year, Madison penned a defining document outlining the philosophical underpinning of both freedom of religion and freedom from religion in America, his “Memorial and Remonstrance Against Religious Assessments.”

After getting the bill delayed and shrewdly supporting Henry’s elevation to governor to get him out of his way in the legislature, Madison delivered 15 separate broadsides against the proposal.

By January 1786, overseen by Madison, the assembly was passing the Thomas Jefferson-written “Virginia Statute on Religious Freedom,” America’s other grounding work on freedom of and from religion. Jefferson lists his authorship of this statute on his gravestone. He does not list the presidency.

This well-choreographed, long-term intellectual and practical assault by Madison stands not only as a master class in political maneuvering, but also as the clearest logical framework for the separation of church and state written by the Constitution and Bill of Rights’ primary negotiator.

Madison and Jefferson’s success in Virginia would eventually lead to the Free Exercise and Establishment clauses of religious freedom in the First Amendment of the Bill of Rights, after its ratification in 1791, following the Constitution’s ratification in 1788.

Madison’s attack on Henry’s proposal to force taxpayers to support Christian religious institutions was dynamic, well-studied in history and logic, and multi-pronged.

As the author of “Becoming Madison: The Extraordinary Origins of the Least Likely Founding Father,” Michael Signer, puts it:

He launched with the most fundamental issue of all. Religion, Madison declared, belonged to the realm of conscience, not government. Men, considering only the evidence “contemplated by their own minds,” could not be forced to follow the dictates of other men. Religion therefore was, and must always be, unreachable by politics, by the state, and indeed by any instruments of human power. He explained that was precisely what Jefferson had meant by his already famous term “unalienable” in the Declaration of Independence.

The state cannot actually support religion, because religion’s strength depends on men’s mind, their reason, and their conscience alone.

Henry, later a leader of the anti-Federalists and ostensibly opposed to big government, wanted to use big government to fund and elevate Christian religion he claimed to be under siege. (Sound familiar?)

But Madison had yanked the framing out from under him. While Henry was orating, Madison took notes on the back of an envelope. The true question, he pondered, was not whether religion was necessary, but whether religious establishments were necessary for religion. His answer was, “No.”

After his opening, Madison assailed Henry’s proposal with 14 more meticulous arguments of attack. From Signer:

He declared that the assessment violated the principle of equality by treating the religious class differently from others.

He lambasted the “arrogant pretension” that the civil magistrate, represented by the legislature and tax authority, could be a “competent judge” of religious truth.

He demanded, of 15 centuries of the legal establishment of Christianity, “What have been its fruits?” Sarcastically, he observed that state involvement in religion had generated only pride and indolence in the clergy; ignorance and servility among the laity; and, in both, superstition, bigotry, and persecution.

Madison recounted the history of religion and politics being intertwined to reinforce tyrannies. He warned of public unrest and questioned, if government could favor Christianity over other religions, what would prevent it from favoring one Christian sect over others?

He thus turned Henry’s argument against him, declaring Henry’s bill was “adverse” to the “diffusion of the light of Christianity,” and that Virginians could in fact protect their Christian faith by opposing Henry’s bill. From Signer:

He concluded on hope rather than fear. The freedom of religion, he said, was a “gift of nature.” If Henry’s bill passed, the legislature might just as easily “swallow up” the executive and judiciary branches, as well as all the individual freedoms. If, on the other hand, Virginians met their duty to God, to the “Supreme Lawgiver of the Universe,” they could “establish more firmly the liberties, the prosperity and the happiness of the Commonwealth.”

By November 1785, Madison’s “Remonstrance” (then-anonymous and distributed as pamphlets) had torched Henry’s bill with wildfire popularity. Gov. Henry could only sit helpless and watch from the balcony as the Virginia assembly sent the proposal to legislative “pigeonhole,” where it was left to die.

Instead came, as said, the Virginia Statute on Religious Freedom, then the U.S. Constitution and the Bill of Rights.

While Henry opposed the Constitution, he pushed for a bill of rights to be added. Madison came to agree, then almost single-handedly revived, advocated, and negotiated the Bill of Rights. In its final form, though, Henry deemed it inadequate and opposed that too. Regardless, it was ratified and the two religious freedom clauses lead the First Amendment.

“The purpose of separation of church and state is to keep forever from these shores the ceaseless strife that has soaked the soil of Europe in blood for centuries,” Madison wrote in 1803.

Separation of church and state is a milestone in the history of human civilization, and our most-prized and precious achievement in the founding of the American Republic.

The current U.S. Supreme Court and separation of church and state

On Tuesday, a 6-3 Republican U.S. Supreme Court struck down a Maine tuition program that does not allow public funds to go to schools that promote religious instruction.

In effect, the ruling means the taxpayers can be forced to fund private, for-profit religious schools that promote theologically-based discrimination.

It also signals that the Republican activist, right-wing majority on the court is in the process of overruling America’s foundational religious freedom philosophy as established by Madison and Jefferson, and slowly dismantling the separation of church and state with this and likely many more upcoming decisions — whether directly, or by delivering unchecked power over religious issues to state legislatures.

In her dissent, Justice Sonya Sotomayor said that rather than being a constitutional requirement, “the Court leads us to a place [today] where separation of church and state becomes a constitutional violation.”

They are bludgeoning the Establishment Clause, the very first right enumerated in the Bill of Rights’ First Amendment: “Congress shall make no law respecting an establishment of religion, or prohibiting the free exercise thereof…”

This will be a full, direct conflict with the tenets of the Jewish faith, and the beliefs of the vast majority of secular values voters.

Two-thirds of Americans oppose overturning Roe, and the number of U.S. adults who do not identify with any organized religion, 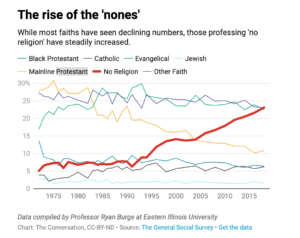 but vote their personal values and science-backed, fact-based evidence for the betterment of society, is growing rapidly.

They poll with 74% support for abortion rights, and advocate for taxpayer-funded, religiously neutral public education.

The essence of the argument in the Supreme Court case on schools is that if the state decides to provide public funding for any for-profit, private schools, it must include religious schools.

My counter-argument is that public education is too important to be turned into a through-mechanism for private profiteering, religious or otherwise.

Those who wish to send their children to any private, for-profit schools have the choice to pay to do so themselves, and general state and federal child tax credits would be best to help, if a family chooses to use theirs that way. For-profit, private schools can compete in the free market without public subsidy. Or should I call it public welfare?

What’s worse, a lot of this appears to be intentional as we’ve seen massive for-profit, private charter school campaign giving in return for sweetheart lawmaking.

More than $1 billion in Ohio went to a defunct, for-profit charter school hatched on a Waffle House napkin that got caught overbilling the state by hundreds of millions of dollars. This is a horrifying robbery and insult to our public schools.

The public schools in all of our neighborhoods and communities should be fully-funded, modernized, cherished, protected, and

supported monuments of best practice education; promoting healthy, vibrant growth for a well-equipped and thriving citizenship; full of community-bonding activities from athletics to all of the arts and sciences, and abundant resources, from early childhood education to household finance, career preparation, technical and high tech education.

They should be palace testaments to our commitment to our schoolchildren, communities and our future.

Incidentally, in addition to his hand in America’s founding, Madison was also one of America’s most passionate early advocates for public education.

In 1822, Madison exchanged letters with William T. Barry, the chairman of the Kentucky Senate, who had been seeking his counsel in creating a system of public education in the Bluegrass State.

When the Kentucky legislature established generous funding for public education, it could not be too much applauded, Madison responded enthusiastically.

“A popular Government, without popular information, or the means of acquiring it, is but a Prologue to a Farce or a Tragedy; or, perhaps both,” Madison wrote. “Knowledge will forever govern ignorance: And a people who mean to be their own Governors, must arm themselves with the power which knowledge gives.”

David DeWitt is the editor of the Ohio Capital Journal, a sibling site of the Pennsylvania Capital-Star, where this essay first appeared.

Our GOP activist U.S. Supreme Court is assaulting the separation of church and state | Opinion

The Pennsylvania Capital-Star welcomes opinion pieces from writers who share our goal of widening the conversation on how politics and public policy affects the day-to-day lives of people across the commonwealth.