“Show me the bodies!” someone demanded at the end of my lecture a few years ago.

As a scholar of public health ethics, law and policy, I had just warned an audience of professors and university administrators about the perils of partnering with, or taking money from, corporations – a common practice in public health research and policymaking.

It’s not always possible to prove harm like that, I said. But there are other reasons for government, the academy and public health organizations to maintain arm’s length relationships with corporations. Among them, preserving integrity and public trust.

As I document extensively in my book on corporate influence in public health, partnerships distort research agendas, not merely of individual researchers but of entire fields of research. They also reinforce the framing of public health problems and their solutions in ways that are most favorable to the corporate partners.

These concerns are most acute when corporations are creating or exacerbating a public health problem. Think of a soda company sponsoring exercise initiatives to burnish its reputation and deflect attention from the role of its brands in the obesity epidemic. But close relationships with corporations can be problematic even when companies are working on medicines or other potential solutions to health problems.

I failed to convince that skeptical audience member. But recent research found the bodies, or, at the very least, pointed to one place where we might start digging: the opioid crisis. The new study concluded that drug companies’ marketing of opioids to physicians was “associated with increased opioid prescribing and, subsequently, with elevated mortality from overdoses.” Recent court filings also suggest that doctors who met with opioid drug reps were 10 times more likely to have prescribed opioids to patients who later died of an overdose.

Marketing to physicians is only one of the strategies employed by opioid manufacturers. Between 2012 and 2017, five opioid manufacturers gave nearly US$9 million to 14 patient advocacy groups and medical societies. Although this sum is a drop in the ocean for drug companies with billions of dollars in opioid revenues, these were substantial sums for the recipients. And the companies’ investments paid off.

Many of the groups issued guidelines minimizing the addiction risks of prescription opioids. They also lobbied extensively to defeat legislation restricting opioid prescribing. When the CDC issued its draft guidelines to limit opioid use in 2016, opposition was significantly higher among organizations that had received industry funding.

The most commonly touted solution to financial conflicts of interest is disclosure of the conflict. The Physician Payments Sunshine Act of 2010 requires drug companies to disclose gifts to physicians and teaching hospitals. Democratic senator Claire McCaskill has introduced a bill to extend these provisions to cover payments made to patient advocacy groups.

But disclosure, while necessary, is not sufficient for addressing corporate influence in science, medicine and public health. While researching my book, I found plenty of evidence that drug, food and soda companies – among others – weave powerful webs of influence when they support the work of public health agencies, universities, patient advocacy groups and health professional associations.

It’s reasonable to expect corporations to exercise influence to the full extent permitted by law. But I believe governments have a responsibility to insulate themselves from corporate influence. Only by doing so can they meet their obligations to protect and promote public health. And universities should do likewise in order to protect scientific integrity. By inviting companies to partner, government and the academy play into corporate strategies of influence, imperiling their own integrity as well as science and public health.

When the National Institutes of Health launched a partnership initiative to address the opioid crisis in 2017, it turned to drug companies for guidance. They included an opioid company that pleaded guilty in 2007 to misleading regulators, doctors and patients about addiction risks and potential for abuse – and then continued its aggressive marketing for another decade, according to recent court filings. These documents also indicate that, while running newspaper ads in 2017 claiming that it was a “partner” in the fight against the opioid crisis, the company was still working on plans to expand the opioid market.

The world needs better options for pain management. And the opioid industry may play a role developing some of these options. But partnering with industry is hazardous – even if, as its director has pledged, the NIH enters these arrangements “with the utmost transparency,” and does not take cash payments.

Money need not change hands for partnerships to create reciprocity and influence, burnish the reputation of drug companies, and defuse support for more effective regulation of the marketing and prescribing of drugs. Collaboration may also lead to the neglect of other potential solutions to the opioid crisis – and other potential pain remedies beyond drug therapies.

If the opioid crisis has taught people anything, it’s that the interests of pharmaceutical companies and public health inevitably diverge. While opioid manufacturers and distributors were making billions of dollars, they were sowing the seeds of a crisis that has contributed to the deaths of more than 218,000 Americans and counting. In addition, the total societal costs of the opioid epidemic exceed half-a-trillion dollars per year.

Given these catastrophic costs, policymakers cannot afford to repeat and compound the errors of the past. While tackling pain management and opioid addiction, they must not neglect a third public health challenge: their own “addiction” to partnerships with the private sector. But, before public health officials can wean themselves off these collaborations, they must first acknowledge that they have a problem.

Jonathan H. Marks is the director of the Bioethics Program and affiliate faculty in Law and International Affairs at Penn State University. He wrote this piece for original article. 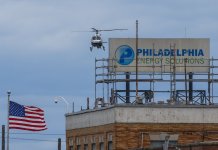