Mexico–United States barrier at the border of Tijuana, Mexico and San Diego, USA. The crosses represent migrants who died in the crossing attempt. Some identified, some not. Surveillance tower in the background. WikiMedia Commons Image by Tomascastelazo.

America has a bunch of foundational myths — George Washington and his famed cherry tree; the belief that anyone can get ahead if they just work hard enough; and the stubborn belief that our occasionally sputtering constitutional republic is still more exceptional than any other nation on Earth.

They’re core to our conception of ourselves as a people. But none is more foundational than our belief that the nation is a melting pot, the place where the poor, the tired, and the huddled masses can make a new start and breathe free.

But a new poll by the Public Religion Research Institute casts some unsettling doubt on that core myth, finding some sharp, partisan divides on Americans’ support for both religious and racial pluralism. The poll of 1,073 adults, conducted Dec. 17-23, 2018, had a margin of error of 3.3 percent.

For instance, “nearly half of Americans generally support a racially and ethnically diverse vision of the United States, although there are moderate divisions by race,” the poll found:

In addition, “nearly two-thirds (65 percent) of Democrats, compared to only three in ten (29 percent) Republicans, mostly prefer a country with racial and ethnic diversity. Republicans are nearly twice as likely as Democrats to state a preference for a Western European majority in the country (13 percent vs. 7 percent). Additionally, over half (56 percent) of Republicans place themselves somewhere in the middle on this issue, compared to one-quarter (25 percent) of Democrats. Independents closely resemble Americans in general on this question,” the poll found. 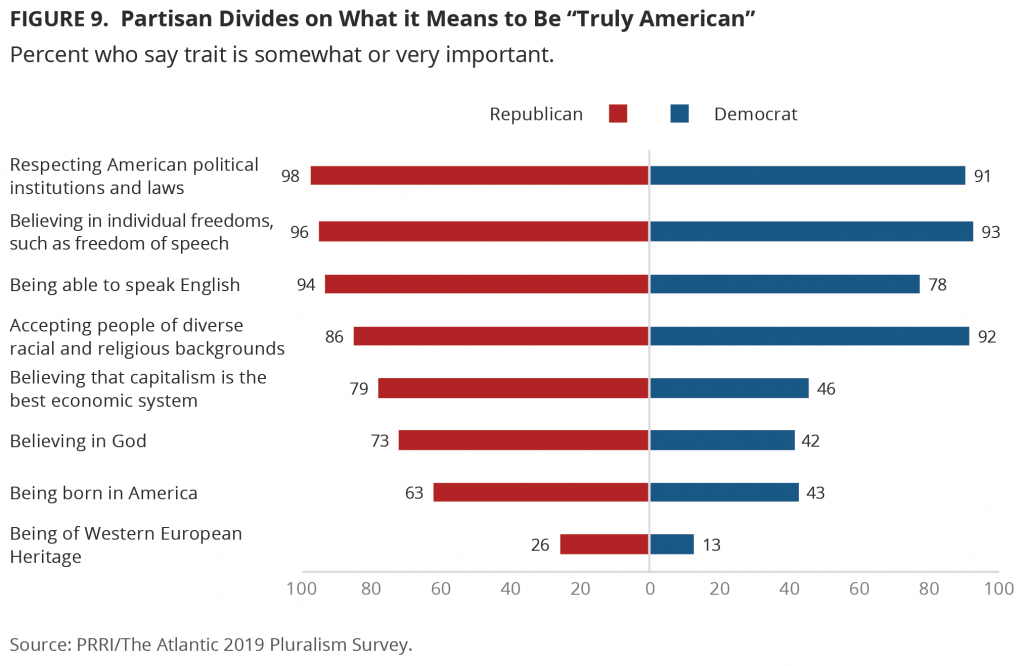 When they were asked the same question about religion, the result was much the same:

The numbers go a long way toward explaining our current, stark polarization and why President Donald Trump’s strongman rhetoric on immigration — at least when it comes to brown- and black-skinned people — resonates with a certain sector of the Republican base.

The bleaker corners of the GOP may want to make America great again, but it’s a very specific vision of an America that doesn’t really exist anymore and as demographic trends clearly indicate, will vanish entirely in the coming decades.

As a recent Brookings Institution analysis makes clear, current racial minorities are the “primary demographic engine of the nation’s future growth, countering an aging, slow-growing, and soon to be declining white population,” and that America will become minority white by 2045.

By then, whites will make up 49.7 percent of the population, compared to 24.6 percent for Hispanics, 13.1 percent for blacks, 7.9 percent for Asians, and 3.8 percent for multiracial populations, the Brookings analysis found.

“The shift is the result of two trends. First, between 2018 and 2060, gains will continue in the combined racial minority populations, growing by 74 percent,” Brookings scholar William H. Frey wrote. “Second, during this time frame, the aging white population will see a modest immediate gain through 2024, and then experience a long-term decline through 2060, a consequence of more deaths than births.” 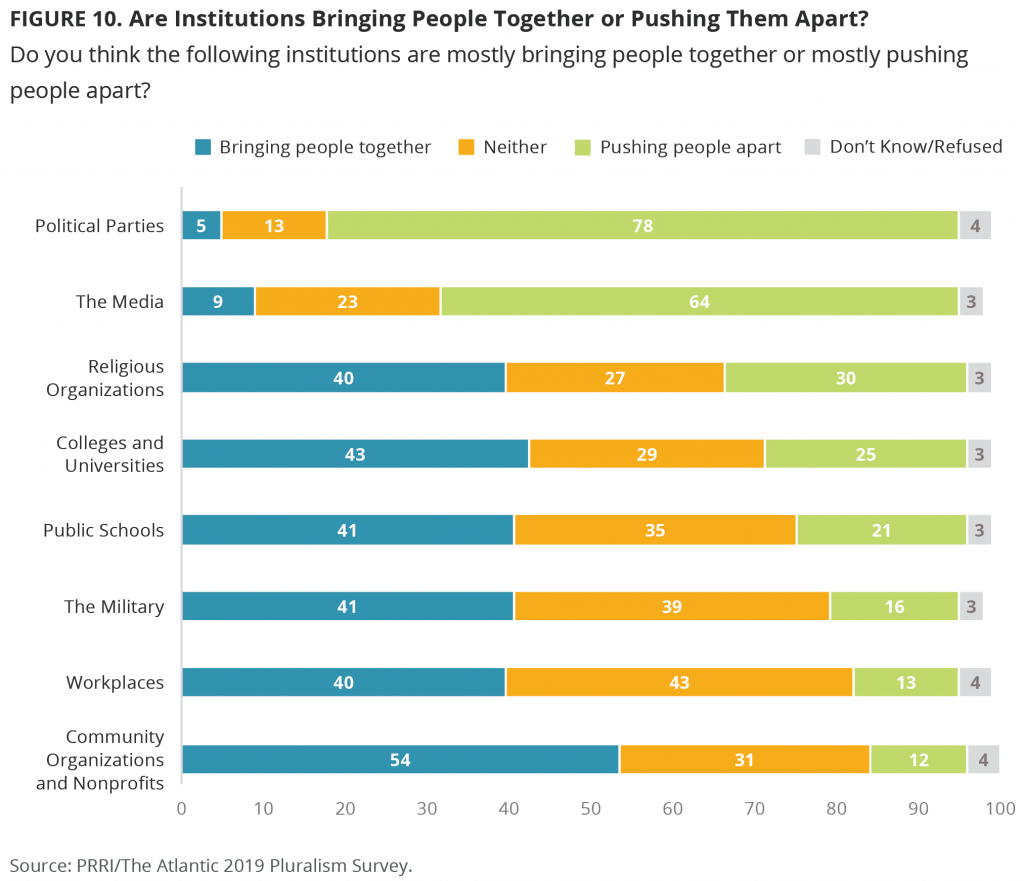 Those profound divisions don’t augur well for our ability to reach consensus on the big questions.

As The Washington Post’s Jennifer Rubin notes, if one group of Americans doesn’t think highly of religious diversity, how can we ensure that we protect religious freedoms for all Americans? And if a significant chunk of Americans disdain diversity, how can we ensure equal protection under the law for all of us — irrespective of skin color, ethnic heritage, sexual orientation, or gender identity?

More importantly, if a vast segment of Americans doesn’t believe that certain people even belong in the United States, how can we ever hope to reach accommodation on immigration reform — which remains one of the great public policy challenges of the last two decades?

These aren’t mere hypotheticals — they’re actual policy and moral challenges in the face of a nation that is literally changing under our feet every day.

Healing those divides takes work. And they’re challenges that no border wall, regardless of how allegedly big and great it is, can hope to answer or resolve.

Capital-Star Q+A: Nathan Reigner, Pa.’s first Director of… by Cassie Miller April 17, 2022
What, to the slave, is the Fourth of July? | Monday Morning… by John L. Micek July 4, 2022
Our GOP activist U.S. Supreme Court is assaulting the… by Capital-Star Guest Contributor June 24, 2022