(*This story was updated at 12:42 p.m., on 7/22/20 to correct the county that Rep. Frank Burns represents in the state House, and to correctly reflect the information that Burns is seeking from the Pennsylvania Liquor Control Board.)

That’s the question being asked by Democratic state *Rep. Frank Burns, D-Cambria, and his attorney, Terry Mutchler, who was the first director of the state’s Office of Open Records.

They want to know why the Pennsylvania Liquor Control Board is taking them all the way to the state Supreme Court to justify withholding what they think should be a pretty accessible piece of information: The number of restaurant liquor licenses available for auction* in each of Pennsylvania’s 67 counties.

As a senior member of the House Liquor Control Committee, Burns said he was trying to get the information in regards to legislation, which would significantly increase the number of restaurant liquor licenses in the state.

“This is such a black-and-white issue,” Mutchler told the Capital-Star. “I can’t believe the LCB is fighting us on it. This isn’t complicated. He’s not looking for the names of who owns the licenses. He just wants to know the number of licenses.”

She pointed out that both the state Office of Open Records and Commonwealth Court had ruled the information was a public record and should be available to Burns.

“It’s very frustrating,” Burns said. “I have to wonder if there’s something bigger going on here. What are they trying to hide.”

One thing is certain. The appeals are costing taxpayers money.

“It’s a big waste of taxpayers money,” said Mutchler. “The state is having all kinds of financial problems right now and they want to throw money away by pursuing this case. I can’t believe it.”

Meanwhile, Burns is being forced to pay for Mutchler’s service out of his wallet.

“It’s not fair, the LCB doesn’t have to spend any of its money for this. All the money is coming from taxpayers,” Burns said. “But I have to foot my own bill, and it’s costing me a considerable amount of money.”

At the LCB meeting, Diaz said the information Burns is seeking is proprietary and involves trade secrets. He added that releasing the information would have a “detrimental effect on the marketplace,” lowering prices for both the LCB and the license holders.

The Pa. Liquor Control Board has some transparency problems | Editorial Cartoon

However, Burns said if the LCB truly wanted to help license holders, it should let the licenses be sold on the marketplace instead of putting them up for bid. He said the license holders should also be able to sell them to anyone, across the state. Currently, the licenses have to be sold within the same county.

“There should be a free market for the licenses,” said Burns. “The problem is the LCB is responsible for regulating licenses and then it’s also in the business of selling licenses. To me, that’s a conflict that shouldn’t be allowed to happen.

“They should only be allowed to regulate licenses,” he added.

Diaz referred to a 1981 case, which he said held that the LCB was both an agency and a business and didn’t have to follow the same regulations as other state agencies.

Mutchler, though, said both the Office of Open Records and Commonwealth Court ruled that the LCB is an agency, not a business, and has to make its records open, including the release of how many restaurant liquor licenses are in every county.

“I think they’re just trying to throw something against the wall and hope it sticks,” said Mutchler. “This is not a complicated issue. It’s black and white. The information should be made available to the public.”

Mutchler added that if Burns was a state legislator in most other states, he would have access to the information just for being a lawmaker.

“This is something that maybe other legislators will look at and vote to change the law,” said Mutchler. “There’s no reason why legislators shouldn’t have this information without going through the right-to-know laws.”

Burns said he believes the three members of the LCB wield too much power and have become arrogant and unresponsive to the wishes of the public.

“The LCB has their own little kingdom with a moat around them for protection,” said Burns. ”They’re not accountable to anyone and that has to change. If they can treat a legislator like this you can only wonder how they treat other people out there.”

Burns pointed out the members are appointed by the governor and the latest selection was Mary Isenhour who was the former chief of staff for Gov. Tom Wolf.

Given that Wolf has spoken out for transparency and openness in government, Burns said the governor should step in and force the LCB to release the information.

“Gov. Wolf preaches about transparency but that’s all he does is talk about it,” Burns said.

Burns said by appealing to the Supreme Court, the LCB might be hoping that eventually he’ll give up and go away. But he promises that will never happen.

“I’m not going away,” Burns said. “I have too much invested at this point. I’ve gone too far to ever turn back now.” 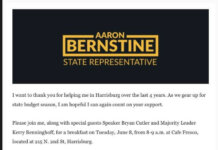 Pa. House Republican leadership set to fundraise with lawmaker they called to resign

How parents can support a child who comes out as transgender: By conquering their own fears, following their child’s lead and tolerating ambiguity |...

One lawmaker’s lonely quest: How many restaurant liquor licenses are there in every Pa. county? | Mark O’Keefe