Fifty years ago, Mark Segal walked into a bar in New York City’s Greenwich Village and stumbled into history.

Then an 18-year-old gay man, and newly transplanted from Philadelphia, Segal watched as New York City police stormed into the gay-friendly Stonewall Inn, shaking down the patrons and checking IDs, as they executed a raid common in a city where it was against the law for bar owners just to serve gay people a drink.

The patrons were ushered out of the bar and into the street. When the police gave the order to disperse, no one listened. And then someone threw a rock. And more rocks. And cans. And whatever they could get their hands on.

On that early morning on June 28, 1969, the explosion of protest that history would come to know as The Stonewall Riots unfolded before Segal’s eyes. And in that moment, the 18-year-old from Philadelphia made a decision that would change his life.

“I decided that night that I would become something that there was no title for,” Segal recalled Monday during a speech to the Pennsylvania Press Club at the Harrisburg Hilton. “I’d become a ‘gay activist.'”

With the 50th anniversary of that watershed moment approaching, Segal, the founder and editor of the Philadelphia Gay News, reflected on his own half-century journey through the gay rights movement, from young activist, with “holes in my jeans,” to an establishment figure to whom national news organizations now turn for his perspective and knowledge.

It’s a long way from Segal’s first appearance on network television in 1973, when he gatecrashed the “CBS Evening News with Walter Cronkite,” planted himself on the desk between the venerable anchor and his national audience of 60 million people, and held up a sign that read: “Gays Protest CBS Prejudice.”

The network went dark for seven minutes, he recalled with a chuckle. The story made the New York Times the next day. And to hear Segal tell it, that was the point: to take gay people from invisible and persecuted to the mainstream, with the country watching.

“People like me had to hide, afraid that if we were found out, we’d be incarcerated or lobotomized,” he said.

After Stonewall, Segal joined the historic activist group the Gay Liberation Front, which was dedicated to a simple but — for its time — quite radical proposition: “We decided we were going to take our identity back. We decided what we’d be called. And we’d create our own community. It meant ending invisibility. Oscar Wilde used to talk about ‘the love that dare not speak its name.’ This had to be the love that spoke its name.”

The journey would ultimately take decades. And Pennsylvania would play a key role, he said, starting with the first gay sit-in at a Philadelphia restaurant in 1965, to more high-profile events.

In 1974, for instance, Segal was able to convince then-Gov. Milton Shapp to issue an executive order barring anti-gay discrimination for state employment. When a leader in the State Police complained, Shapp asked Segal to apply to become a state trooper.

The Democratic governor’s press office went to work. Facing a throng of reporters the next day who’d gathered to watch the historic moment at a state police barracks, Segal quipped that he was applying “because I love a man in uniform.”

The state police dropped their objection, he said, again chuckling.

Other governors, including Republicans Dick Thornburgh and Tom Corbett, had their roles to play. So did former Segal’s fellow Philadelphian, Democrat Ed Rendell, who launched a gay-friendly tourism program that’s now emulated in other states.

The slogan: “Philadelphia, get your history straight and your nightlife gay.”

Segal said Monday that this year, after several false starts, the state Legislature should be able to pass a bill banning employment, housing, and accommodation discrimination against Pennsylvania’s LGBTQ residents.

Republicans who control the House and Senate just need to bring the bill to the floor, he observed.

“We have the votes,” Segal said, adding the same holds true for a LGBTQ rights bill that passed the majority-Democrat U.S. House of Representatives last week.

Pennsylvania supporters of that LGBTQ bill believe that, thanks to an influx of younger lawmakers and wider societal acceptance, they have their best chance in years to get the legislation onto Democratic Gov. Tom Wolf’s desk. Polling data indicates broad support for same-sex marriage and gay rights.

“People want to know they can keep their freakin’ job, stay at home, and engage like a normal human being,” Democratic state Rep. Malcolm Kenyatta, one of two openly gay House lawmakers, told the Capital-Star earlier this month.

For Segal, that kind of progress is critical if Pennsylvania is going to emerge from the ranks of states that are the least friendly to LGBTQ Americans.

Pennsylvania shouldn’t be the state, he said, “where you can get married, but be refused the honeymoon suite.” 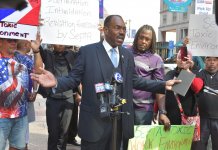