Here’s one set of eyes and ears that won’t be fastened on President Donald Trump’s speech on July 4 at the Lincoln Memorial.

The aural and visual blackout has nothing to do with politics or ideology, though Trump’s policies and politics are 18th Century leftovers, at best. Everything a president says, good, bad, even ungrammatical, is important to the nation and the world. Forget that he lies, misrepresents and dissembles.

The personal boycott has more to do with the remarkable sense called hearing that converts sound waves into language, and the visual impression of body language that acts as a decoder to the intent of the spoken word. They clash and they’re harsh. They create confusion and cacophony.

Simply put, the man is a lousy speaker.

So what we have here is an invitation that’s being consigned to the shredder. On Feb. 4, Trump tweeted his plans to speak to America on the Fourth of July: “HOLD THE DATE! . . . Major fireworks display, entertainment and an address by your favorite President, me!”

And now it’s official. The president will speak. There’ll be fly-overs and fireworks and the fife-and-drum tootling of John Phillip Souza polluting the air.

The only thing missing (in the planning) will be the peasants storming the White House instead of the Bastille, which was greatly exaggerated on-stage as “Les Misérables.” Historically, there were only a half dozen or so prisoners in the Paris fortress and not the persecuted masses the show imagines.

Great speeches, like all great writing, are all nouns and verbs. Trump certainly is no Franklin D. Roosevelt, John F. Kennedy, or Ronald Reagan or Barack Obama, probably among the best orators to occupy the White House. And right up there with the best of them is Sen. Edward Kennedy, brother of the president. These men could sell a phrase or a line the way Sinatra sold a lyric.

And no one really knows whether the man can write, and if he can, he’s surely no match for Theodore Roosevelt or Obama.

Thomas Jefferson is omitted, deliberately, because in his rewriting of the Second Amendment he misplaced a comma and the nation’s been fighting over the misbegotten punctuation ever since. A single comma has decided gun rights and wrongs.

And let’s remember that Trump will be occupying the sacred space that is reserved for Abraham Lincoln, who wrote and delivered some of the most memorable oratory in the nation’s history, and where Martin Luther King Jr. elevated the phrase, “I have a dream,” to a meditation.

But give Trump his propers. He is a “stable genius,” in his own estimation.

Obama is a good example. His speech, or eulogy, at the funeral service following the shootings at Mother Emanuel Church in Charleston, S.C., captured in its delivery not only the solemnity of the occasion, but it had the lyrical flow of a spiritual and a cadence that strummed to the black patois of the audience. It was rap for the religious. Obama’s singing of “Amazing Grace” was the coda to a beautifully written and delivered speech, among his most memorable.

The great British writer and wit, Max Beerbohm, wrote a series of essays on the difference between words that are written for the ear and those that are meant for the eye. Beerbohm was bedeviled by the difference when he switched from writing for publications to writing for radio broadcasting.

Trump has a tin ear. Working from a teleprompter, he usually delivers two or three words in a puff, with no rhythm or cadence to carry a thought, and he pauses where there is no punctuation, or worse, no reason to halt except that he can’t carry a sentence, let alone a tune. A read-through of the printed text reveals well-structured and smooth sentences. But there are no distinguishing style points to Trump’s speeches aside from his awkward delivery.

Trump has another annoying speech tic. He often sounds like Jimmy two-times in the mob movie “Goodfellas,” repeating in rapid sequence words or phrases that he believes are important.

The Mueller Report: ‘We’re not there yet’ on impeachment, Pa. U.S. Rep. Madeleine Dean says

And it’s even more awkward to watch Trump, a grown man of self-ordained brilliance, use his forefinger as a pointer when he reads a type-written text from a binder or note cards.

Another key to solid public speaking is proper breathing. Breathing from the diaphragm, and not from the back of the throat, as Trump seems to do, is essential to putting the proper force behind words and carrying sonorous phrases to their maximum effect. And this is not about shouting but about giving the microphone enough air to do its work.

But, then, considering the location of the diaphragm, perhaps Trump’s expansive gut asserts too great of a downward pull to allow a deep breath. The red ties accent the girth.

Come to think of it, in Trump’s nearly three years in office, with the millions of words and thousands of tweets and hundreds of gaggles in the White House driveway, he has yet to produce a single memorable phrase or figure of speech that sums up. . .well, anything. (Name-calling doesn’t count. Neither do campaign slogans.)

When Trump speaks, the result sounds as if he’s trying to convert six diphthongs into a primitive language, or that he’s mashing his fricatives against the roof of his mouth. Demosthenes, among Greece’s greatest speakers, overcame his oratorical shortcomings, it is said, by practicing with pebbles in his mouth. He also studied the speeches of previous great orators.

In fact, in ancient Greece and Rome, oratorical skill was considered a condition of fitness for public office. Competitions were held regularly in the Agora, kind of like our modern-day television debates only with competence and substance and prose powerful enough to call people to action.

Trump drew his inspiration for pageantry from a Bastille Day display he witnessed in Paris. He vowed to replicate the event in America, though this country frowns on displays of military might as it rumbles and roars on boulevards, passing balconies, in other nations.

He attempted to stage an extravaganza on the last Veterans Day, Nov. 11, but was discouraged and unable to marshal the necessary machinery. And now Trump has co-opted the nation’s birthday to stage what many view as an extension of his campaign rallies at public cost.

In addition to his uninvited presence at America’s birthday party, Trump has promised additional entertainment (the circuses part of “bread and circuses”) to the goers and the TV audience (which is what it’s really all about) of his spectacle.

They include a relocated burst of fireworks and a fly-over as a tribute to the armed services along with military demonstrations and a parade, something Trump knows little about since he ducked the draft five times and never put on a uniform. All of this adds to the assault on the ear that emanates from Trump’s vocal cords.

R.S.V.P. No thanks, and no excuses, Mr. President. The Fourth of July comes with reverence for the Declaration of Independence and the Constitution, along with echoes of Lincoln, Roosevelt, Kennedy, Reagan and Obama. They were speakers who had something to say, and said it well.

Frank. A DeFillipo is a columnist for Maryland Matters, a States Newsroom site, and a sister publication to the Capital-Star. This piece was first published by Maryland Matters on June 24. 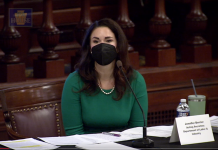 On July 4, I’ll be tuning out the Trump cacophony | Frank A. DeFillipo