On ‘Hardball,’ Sen. Katie Muth rolls out her plan to save cash assistance | Tuesday Morning Coffee

State Sen. Katie Muth, a freshman Democrat from Chester County who’s made national headlines in the wake of a fiery confrontation on the floor of the state Senate last week, took her argument for a soon-to-be spiked state program helping the most vulnerable Pennsylvanians to network cable news on Tuesday night.

In an appearance on MSNBC’s “Hardball” program, Muth told host Chris Matthews that she’s looking for a way to save the state’s cash assistance program, which provides payments of about $200 to people with disabilities, those struggling with addiction, and women fleeing domestic violence.

The Legislature voted to eliminate the program as part of the state budget last week. Democratic Gov. Tom Wolf, who opposed the vote, nonetheless signed the bill into law because it also included subsidies for hospitals in Philadelphia.

“It’s a program that is truly impactful. It’s shameful that it was voted to be eliminated,” Muth told Matthews. “It’s a temporary assistance program. Many people end up going on temporary or permanent disability. They use it for bus fare, medical co-pays.”

On Monday, Muth, and fellow Democratic Sens. Lindsey Williams and Pam Iovino, of Allegheny County, and Maria Collett, of Montgomery County, announced they were seeking co-sponsors for a bill establishing a “Emergency Relief Program,” that would, like general assistance, provide temporary help to the most vulnerable Pennsylvanians.

“Averaging around $200 per month for an eligible individual, this small injection of cash support has a huge impact. It can stabilize their situation by providing funding to rent a room, to pay for medication necessary to function, to do laundry or to afford toiletries most Pennsylvanians take for granted. Ultimately, Emergency Relief can be a bridge to self-sufficiency,” they wrote. 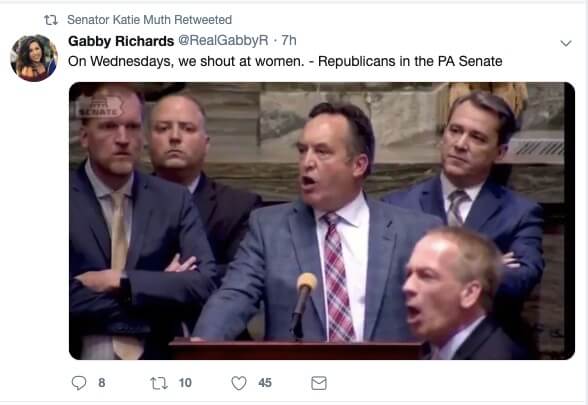 Muth’s floor speech, in which an increasingly enraged Majority Leader Jake Corman, R-Centre, shouts at Lt. Gov. John Fetterman, a Democrat, over a parliamentary end-around that allowed her to speak, was widely circulated on social media in the hours after the vote.

On Tuesday night, Matthews, who hails from Montgomery County, said Corman sounded like he was being “dismembered” as he demanded that Fetterman restore order in the 50-member chamber.

Asked about the tenor of Corman’s demands, Muth agreed that the Senate Republican floor boss “sounded like he was in tremendous distress,” and that it was ironic “for someone who makes $120,000 a year,” to be shouting about her efforts to save the program. She’s previously observed that those cash payments are less than the average lawmaker receives for two nights’ of food and lodging per-diems for working in Harrisburg.

Muth told Matthews she was trying to elevate the story of a Pennsylvanian who had benefited from General Assistance, which is why she stuck to her remarks, even as tensions in the Senate veered to the volcanic.

Muth’s viral fame had already been growing by the time she showed up on MSNBC on Tuesday night.

A high-profile tweet from one of the leading Democratic presidential contenders, who knows a thing about attempted mansplaining, further elevated a growing statewide and national profile that had been growing heading into Muth’s cable news appearance.

We pointed out last week that the televised confrontation between Fettermanand  Corman — while Muth plowed through her floor speech — was an inflection point in state politics.

It’s hard to find a more vivid illustration of the yawning divide between establishment Republicans and progressive Democrats who don’t care about crashing through the chamber’s arcane operating rules when it comes to making a point.

Republican leaders have maintained that they weren’t shouting at Muth, but rather at Fetterman, as they fruitlessly tried to get him to shut down the suburban Philadelphia lawmaker. And they may think they’re right.

But it no longer matters.

Conversations with Democratic women over the weekend, the kind who might be only too happy to send the handful of surviving suburban Philly moderate Republicans packing in 2020, pointed to the inescapable reality that they only saw one thing: A bunch of angry white dudes trying to shout down — and shout over — a duly elected woman who was trying to represent her constituents.

The more that Muth video gets played, that’s the message that gets delivered. And it’s one that Republicans are going to have a harder and harder time parrying.

Don’t believe us? Ask House Speaker Mike Turzai about how Voter ID was going to deliver Pennsylvania for Mitt Romney in 2012.

The medium, as they say, is the message.

Our Stuff.
Gov. Tom Wolf signed a mess of bills, benefiting National Guard families, farmers, and job-hunters, into law on Monday. Here’s our rundown of the legislation, and what it does.

On our Commentary Page, Duquesne University law professor Bruce Ledewitz has his take on the SCOTUS’ gerrymandering decision last week. And Senate State Government Committee Chairman Mike Folmer, R-Lebanon, has some thoughts on election reform bills that made their way through the chamber last week.

Pennsylvania now has an online sales tax. The Inquirer explains how it will work.
LG John Fetterman was in the Mon Valley to talk about the future of U.S. Steel in the region.
The Morning Call explains why the state’s year-old fireworks law is a pain for consumers and law enforcement alike.
UPMC Children’s Hospital in western Pa. has reported 12 cases of MRSA bacteria, the Tribune-Review reports.

Heavy Rotation.
Here’s one from Elbow for your Tuesday morning. It’s ‘Gentle Storm.’

On ‘Hardball,’ Sen. Katie Muth rolls out her plan to save cash assistance | Tuesday Morning Coffee