A newly released report has detailed the nationwide spread of per- and polyfluoroalkyl substances, a class of chemicals known as PFAS, concluding that the number of people exposed to the potentially cancer-causing contaminants has been “dramatically underestimated,” by researchers.

Based on their own tests, researchers at the Environmental Working Group said Wednesday that “PFAS is likely detectable in all major water supplies in the U.S., almost certainly in all that use surface water. EWG’s tests also found chemicals from the PFAS family that are not commonly tested for in drinking water.”

Used in tape, nonstick pans and other everyday substances, PFAS have been linked to cancer, decreased fertility, developmental delays and other conditions and have been found in high concentrations in sources of public drinking water and other sites around the country, Capital-Star Washington Reporter Allison Stevens wrote earlier this month.

Nearly 300 military sites across the county, including the former Willow Grove air base in the Philadelphia suburbs, have PFAS contamination and as many as 110 million Americans are drinking PFAS-contaminated water, according to Environmental Working Group data.

Earlier this month, the majority-Democrat U.S. House passed legislation cracking down on the substances. The majority-Republican Senate opposes the bill.

According to the EWG’s report, “of tap water samples from 44 places in 31 states and the District of Columbia, only one location had no detectable PFAS, and only two other locations had PFAS below the level that independent studies show pose risks to human health.”

Some of the highest PFAS levels detected were in samples from major metropolitan areas, including Miami, Philadelphia, New Orleans and the northern New Jersey suburbs of New York City.In 34 places where EWG’s tests found PFAS, contamination has not been publicly reported by the Environmental Protection Agency or state environmental agencies. Because PFAS are not regulated, utilities that have chosen to test independently are not required to make their results public or report them to state drinking water agencies or the EPA.

EWG’s samples – collected by staff or volunteers between May and December 2019 – were analyzed by an accredited independent laboratory for 30 different PFAS chemicals, a tiny fraction of the thousands of compounds in the family of per- and polyfluoroalkyl substances.

An EPA-mandated sampling program that ended in 2015 tested for only a few types of PFAS and required utilities to report only detections of a higher minimal level. The EPA also only mandated testing for systems serving more than 10,000 people, whereas EWG’s project included a sample from a smaller system excluded from the EPA program. Because of those limitations, the EPA reported finding PFAS at only seven of the locations where EWG’s tests found contamination.

EWG researchers said they’d  “mapped PFAS contamination of drinking water or ground water in almost 1,400 sites in 49 states. Previously, our analysis of unpublished EPA data estimates that water supplies for 110 million Americans may be contaminated with PFAS – an estimate that could be much too low, based on our new findings.”

They added that their results “are meant to highlight the ubiquity of PFAS and the vulnerability of the nation’s drinking water supply to PFAS contamination. They underscore what an expert at the Water and Environmental Technology Center at Temple University, in Philadelphia, said about PFAS contamination: ‘If you sample, you will find it.”

Our Stuff.
A W. Pa. House candidate is apparently staying in the race despite a slew of  ‘troubling’ Facebook posts, our partners at the Pittsburgh Current report.

‘There’s always room for improvement,’ says a Penn State/Hershey exec  who’s been honored for his LGBTQ leadership. Our partners at the Central Voice bring you the story.

On our Commentary Page, opinion contributor Ray E. Landis looks at the real winners and losers in Pennsylvania’s Lottery jackpots. And trio of scholars from UMass/Amherst wonders where all the Hispanic executives have gone — and what Pittsburgh explains about their absence.

Elsewhere.
Pennsylvania State Police troopers were “were 2 to 3 times more likely to search black and Hispanic drivers,” Spotlight PA reports.
The Department of Environmental Protection has imposed a ‘Code Orange’ alert for the Pittsburgh area, the Post-Gazette reports.
Rumors are swirling about the future of Pa. House Speaker Mike Turzai, R-Allegheny, the AP reports (via PennLive). The GOP leader is expected to make an announcement today.
Ten Lehigh County 911 Center workers have been fired or resigned for a policy violation, the Morning Call reports.

The Pa. House is putting its support behind measures to fight human trafficking, the PA Post reports.
Philly Mayor Jim Kenney traveled to New Hampshire to campaign for Elizabeth Warren, PoliticsPA reports.
Roll Call has what you need to know about the first day of House impeachment arguments in the U.S. Senate. 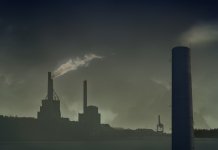