With the Legislature’s return to Harrisburg now only a few weeks away, advocates for a $15/hr. minimum wage are getting ready to mount a new fight to raise a wage that hasn’t seen a hike since the opening years of the Obama administration.

A new poll of 1,106 registered voters by the progressive State Innovation Exchange, conducted from June 15 to June 20 of this year, found 62 percent of respondents either ‘strongly’ or ‘somewhat’ in favor of raising the wage to $15/hr. over the next five years, mirroring the wage hike plan floated by Democratic Gov. Tom Wolf earlier this year.

Strong support among respondents is more than twice the strong opposition to a wage hike (42-18 percent), the poll found.

“This poll tells us that the people of Pennsylvania care about economic pocketbook issues and that they believe working families across state should get a raise, and it’s no surprise,” Nikkilia Lu, the group’s Pennsylvania state director, said in an email. “Pennsylvanians know that if you work hard and play by the rules, you deserve to be paid a wage that can support your family. [Families] across the state are tired of not being able to make ends meet.”

Wolf dropped his wage hike proposal in the face of stiff Republican resistance during negotiations that led up to June’s passage of the 2019-20 state budget.

Wolf has never completely abandoned the prospect of some increase. And the Democratic governor’s progressive allies have continued to press the case for a wage hike throughout the summer.

The polling data released exclusively to the Capital-Star shows the expected partisan and urban/rural divide over a wage hike, as well as the expected demographic divisions:

Rural men aged  50 and younger, as well as all rural college graduates, oppose a hike 52-46 percent, the polling data shows.

Women of color, who have struggled to close an overall wage gap, support a hike 86-12 percent, the poll found. Older voters of color (those aged 50 and older) support a hike 89-11 percent, pollsters found.

The poll, which includes both landline and cell phone respondents, had a margin of error of 2.95 percent.

Our Stuff.
Elizabeth Hardison has the details on House Speaker Mike Turzai’s plan for vouchers — but only for Harrisburg’s cash-strapped schools.

Hardison also has the details on Tuesday’s meeting of the state’s Special Education Funding Commission, which will travel the state this fall to take testimony on this very important part of public education.

On our Commentary Page, Opinion regular Bruce Ledewitz explains why the Dems’ path to the White House runs through Erie. And a University of Nebraska scholar explains how the Trump administration’s appalling treatment of migrants woke up America’s Christian Left.

Elsewhere.
It will not surprise you to learn that someone is doing well by Hahenemann Hospital’s bankruptcy: The lawyers and consultants who are making millions. The Inquirer has the details.
Incoming Pitt freshmen will get unlimited, free 30-minute bike share rides this year, Pittsburgh City Paper reports.
Good news, I-83 commuters in Harrisburg: there will be construction zones on the regional artery for years to come, PennLive reports.
Allegheny County Council has voted down a proposal for a civilian police review board, the Post-Gazette reports.
Allentown is in good financial health. The Morning Call explains how that happened.

📸: @buffalo_tomato | It's #NationalDogDay & Pittsburgh 💛s dogs! What's your favorite dog-friendly place in the city? 🐶 Click the link in our bio for some ideas! #LovePGH

A block-long mural celebrates Philadelphia’s status as a sanctuary city, WHYY-FM reports.
Wages increased across the state in 2018, but not all boats are being lifted, WITF-FM reports.
Two U.S. states — Minnesota and North Carolina — may already be in recession, Stateline.org reports.
U.S. Sen. Pat Toomey, R-Pa., is being targeted in a pair of ads because of his votes on prescription drug prices, PoliticsPA reports.
U.S. Rep. Ilhan Omar, D-Minn., hit back at the Alabama GOP after it recommended that Congress remove her from office, reminding Republicans there that they gave the world Roy Moore, Talking Points Memo reports.

Wolf Watch.
Gov. Tom Wolf and U.S. Sen. Bob Casey, D-Pa., rally at 10 a.m. at the Capitol Fountain for the ‘Protect our Care’ bus tour. Then at 2 p.m., Wolf heads to Philadelphia for a news conference at the Children’s Hospital of Pennsylvania, where he’ll announce his plan for a ‘Lead-Free PA.’

You Say It’s Your Birthday Dept.
Belated best wishes go out to state Sen. Lindsey Williams, D-Allegheny, who celebrated on Tuesday. If you have a birthday you’d like noted in this space, email those felicitations to [email protected].

Heavy Rotation.
Here’s a slow, dreamy jam. It’s ‘What You Need,’ by BAYNK. 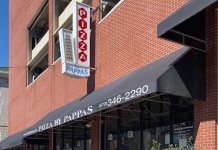 ‘You can’t make a plan until you have the rules’: As NEPA restaurants look to reopen, concerns about the future abound

‘It never should have closed’: In Erie, residents take tentative, first...