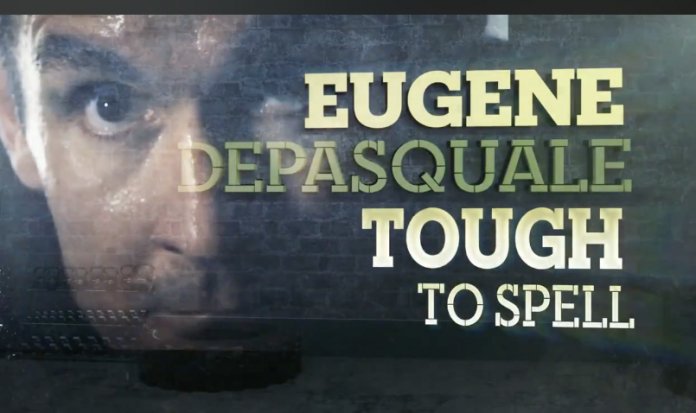 The next time a Republican tries to tell you that the party of Abraham Lincoln, Theodore Roosevelt, and Ronald Reagan isn’t the preserve of xenophobes and bigots, point them to this new ad by the National Republican Congressional Committee taking aim at Democrat Eugene DePasquale.

I’m not going to bother unpacking any of the political claims raised in this breathtakingly stupid digital spot that began circulating this week.

Instead, I’ll just point you to its assertion that, in addition to being a tax-and-spend liberal, DePasquale, the Democratic candidate in central Pennsylvania’s 10th Congressional District, possesses a last name that is “tough to spell.”

Let that one sink in.

There, just nailed it. That wasn’t particularly difficult at all.

Nope, not terribly tough. Just ask all the Marsicos, Feniccis, Augellos, Puglieses, and other central Pennsylvanians of southern European descent who often along Italian Lake in Uptown Harrisburg, which sits in the middle of the 10th Congressional District.

Tough to spell? Not hardly.

NEW AD in #PA10 blasts @DePasqualePA for his crooked agenda.

DePasquale used taxpayer dollars to promote himself and then turned around and backed even higher taxes.

Voters can't trust him to look out for them.https://t.co/ZickLnQf4w pic.twitter.com/KIAZ5yCHH1

Usually, the plan for any political party that hopes to govern from a majority is to expand its coalition by welcoming in as diverse a group of voters as it possibly can. This is the exact opposite of doing that.

The ad includes footage from a very silly DePasquale ad that highlights his devotion to CrossFit. Want to poke fun at that? Have at it. Want to take on his record in the General Assembly? More power to you.

But ask yourself, what does the GOP have to gain — apart from trying to other DePasquale — by pulling his last name into it?

Because it’s part of a pattern, that’s why.

In four years, the Donald Trump-led GOP has dismissed Mexicans as “rapists and murderers.” The administration  enacted a racist travel ban that targeted Muslims. Trump himself has used a racist epithet to describe a sitting member of the U.S. Senate. Black Americans, protesting centuries of racial injustice, are “thugs” and “looters.” The administration imposed a family separation policy at the southern border where the cruelty was the point, not an aberration.

Asian-Americans endured thousands of acts of bigotry after Trump used another racist epithet to describe the COVID-19 pandemic, now global, which has indiscriminately claimed the lives of 218,000 Americans, even as Trump claims, defying actual evidence, that the nation has turned the corner.

Unlike the prosperity, the hate has been trickle-down.

Just this week, a sitting Republican member of the Pennsylvania House of Representatives was the subject of an anti-Semitic attack. And Pennsylvania Second Lady Gisele Fetterman, who is of Brazilian descent, endured a racist tirade during a trip to the grocery store.

On Thursday night, Trump could not bring himself to denounce the baseless and disgusting QAnon conspiracy theory. Nor can DePasquale’s GOP rival, U.S. Rep. Scott Perry, R-10th District.

But now, apparently not content to merely vilify immigrants, the Trump-led NRCC has trained its sights on Italian-Americans, using DePasquale — whose record is open to criticism and should be criticized — as a proxy.

What on Earth do they gain by doing that? Nothing.

In case the NRCC has forgotten, it wasn’t that long ago that Italian-American immigrants were considered pariahs before becoming pillars of the society. For further edification, I’d urge them to read this excellent New York Times op-Ed chronicling the abuse suffered by Italian immigrants, where being accused of having a last name that was tough to spell was the mildest criticism they endured.

Years ago, Ronald Reagan spoke of the United States as a shining city on a hill. This ad can’t even see the hill from the muck it’s rolling in.

We tried drawing our own Pa. congressional maps. Here’s what we came up with