BREAKING: As we went to press this morning, former Veep Joe Biden, who has roots in Scranton, finally announced his 2020 White House bid.

“Former vice president Joe Biden opened his third campaign for the presidency on Thursday, efforts that have spread over 32 years, taking direct aim at President Trump and declaring that “we are in the battle for the soul of this nation.”

In a video posted on social media, Biden recounted the deadly clash between white supremacists and counter-protesters at a 2017 gathering in Charlottesville, after which Trump said there were “some very fine people on both sides.”

“In that moment, I knew the threat to this nation was unlike any I had seen in our lifetime,” Biden said, adding: “The core values of this nation, our standing in the world, our very democracy, everything that has made America America is at stake. That’s why today I’m announcing my candidacy for president of the United States.”

As he joined a crowded Democratic field in which many candidates have staked out progressive positions on an array of issues, Biden made no mention of policy specifics in the 3 ½ -minute video, which also stood out for how directly he confronted Trump.”

Early reports indicated that Biden could visit Pittsburgh as early as Monday:

Breaking: Joe Biden will hold an event in Pittsburgh on Monday at the Teamsters Local 249 hall.

MSNBC also reported this morning that Biden will campaign in Philadelphia on May 18:

“The corporate agenda of President Trump and Congressional Republicans has betrayed the middle class, our children and all Americans seeking a fair shot at the American Dream. These policies have increased the fortunes of the super-rich and large multi-national corporations, while leaving behind too many working families struggling to make ends meet.

At this make-or-break moment for the middle class, our children and our workers, America needs Vice President Joe Biden to be its next President. Joe Biden has spent a lifetime fighting battles on behalf of hardworking Americans while ensuring America’s values and interests are represented abroad. As both a U.S. Senator and our Vice President, he has delivered results for the middle class, kept our country safe and strengthened our standing in the world.

I have worked closely with Joe Biden on a range of issues important to the people of Pennsylvania while he served as Vice President and U.S. Senator. I know he will fight for Pennsylvania families as President. In order to accomplish the urgent task of defeating President Trump, Democrats must win Pennsylvania. Joe Biden can and will win Pennsylvania if he is the Democratic nominee for President.

I am confident that Vice President Joe Biden will work to raise wages for middle class families, provide a better future for our children and restore America’s standing in the world and that is why I am endorsing him to be the next President of the United States.”

Updated: In a statement, Pennsylvania Republican Party Chairman Val DiGiorgio said “Joe Biden’s record offers nothing to Pennsylvanians and a Biden Presidency would return this country to some of its least promising days.”

“On top of that, Joe Biden was a key adviser to eight years of a Presidency that resulted in the terrible Iran nuclear deal, turned a blind eye to Russian interference in the 2016 election, attacked religious organizations, forced unrealistic government mandates onto Americans, and pushed Americans into a health care system where they could not keep doctors they liked and are forced to pay increasing premiums.

“Joe Biden’s record offers nothing to Pennsylvanians and a Biden Presidency would return this country to some of its least promising days.”

Another Update: Casey, Comcast exec David L. Cohen and a bunch of Democratic heavy-hitters will headline a Biden fundraiser in Philadelphia tonight: 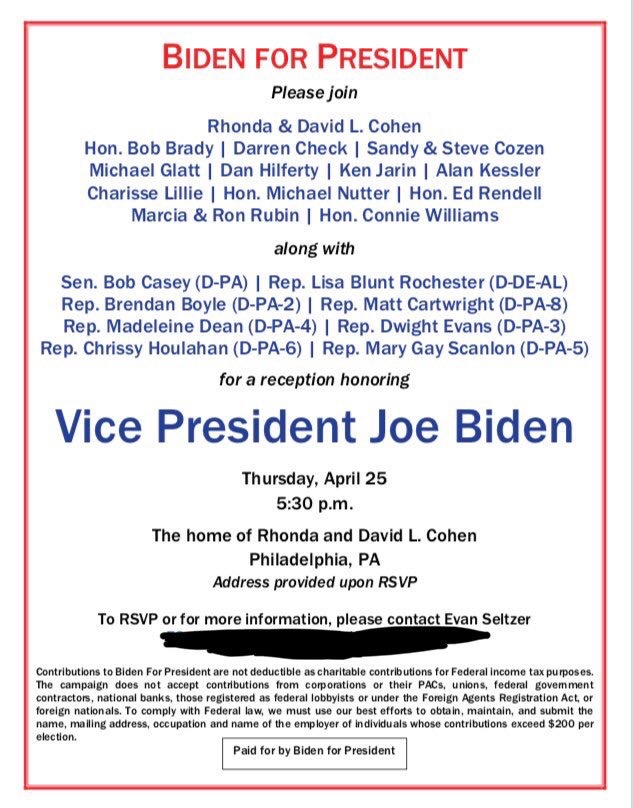 Our Stuff:
Some top Senate Republicans aren’t real happy with the state’s environmental regulators. Stephen Caruso explains why that’s the case.
U.S. Rep. John Joyce, R-Pa., is taking heat for elevating a bogus rumor about tuberculosis infections among migrants at the southern border. We explain why Republicans only have themselves to blame for that.
And despite some improvements, air quality in the Harrisburg metro area is still among the worst in the nation, Caruso also reports.

On the Opinion side of the house, a Penn State nursing professor explains why a change in state policy on care for sexual assault victims is long overdue.

Elsewhere:
Some Philadelphia schools have alarming rates of teacher turnover, The Inquirer reports.
The state has withdrawn $10.9 million in federal funding for the Harrisburg schools in its ongoing audit dispute, PennLive reports.
UPMC’s lawsuit against Attorney General Josh Shapiro has been dismissed, The Post-Gazette reports.
Drug deaths in Pennsylvania have declined for the first time in five years, The Morning Call reports.

A State Police raid at the Westmoreland County sheriff’s office underscores problems at the agency, The Tribune-Review’s editorial board opines. We’d have to agree.
It’s getting harder to scam SEPTA, which is a good thing, WHYY-FM reports.
Former Penn State president Graham Spanier’s case is headed to federal court as his jail term looms, WITF-FM reports.
Former Reading Mayor Vaughan Spencer got sentenced to eight years in prison, the APreports (via PoliticsPA).
Joe Biden is ‘running as Obama’s heir’ – but he’s no Barack Obama, Politico reports.

What Goes On.
At 10 a.m., there’s a ‘parental alienation day,’ observance in the Main Rotunda. Or, if you have a moody teen at home, it’s just Thursday.

WolfWatch.
Gov. Tom Wolf is off to Philly for a 1 p.m. event at an HVAC training center on Clearfield Street, where he’ll celebrate a ribbon-cutting, and extol the virtues of workforce development.

What Goes On (Nakedly Politically Edition).
State Rep. Martina White, R-Philadelphia, holds a 5:30 p.m. reception at the House of the Colonial Dames on Latimer Street in Philly. Guest host is former Rep. John Taylor, who, as much as we wish it otherwise, will never, ever be the bass player in Duran Duran. Admission runs $250 to $10,000. You woulda thunk she could’ve gotten Duran Duran for that.

Heavy Rotation.
So if Martina White isn’t going to help us out, we’ll supply our own Duran Duran. Here’s an extended remix of ‘Planet Earth.’

Thursday’s Gratuitous Hockey Link.
CAAAAAAANEEEEEESSSSS … That is all.