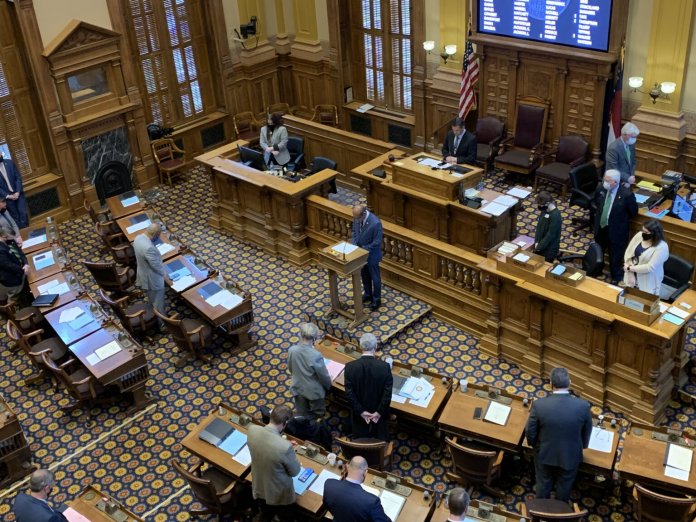 There were any number of ways that state Sen. Cris Dush, R-Jefferson, could have responded to a murderous rampage in Georgia on Tuesday night that left eight people dead, six of them Asian-American women.

But a digressive lecture accusing the chamber’s only Asian-American member of engaging in politically divisive behavior, highlighted by a defense of the former president, that failed to make note of the dead, was not one of them.

But that’s the hand that Dush, a conservative freshly elected to the seat formerly held by ex-Senate President Pro Tempore Joe Scarnati, R-Jefferson, decided to play, turning what could have been a teachable moment about the changing face of an increasingly diverse commonwealth into just another lame, partisan sparring match.

A bit of background: On Wednesday morning, as the nation struggled to come to terms with what appeared to be yet another racially motivated, pandemic-inspired attack on Asian-Americans, Sen. Nikil Saval, D-Philadelphia, also a freshman, took to the microphone to condemn the violence, lend an historical perspective to the incident, and point out, not without cause, that there wouldn’t have been an increase in violence against Asian-Americans if the White House’s former occupant hadn’t used racial epithets to describe a virus that has so far indiscriminately killed more than a half-million Americans.

“As an Asian American—the first Asian American in the Pennsylvania Senate, the first South Asian in the Pennsylvania Legislature, the first person of color to represent my District—I have felt the pressure, the hatred, that has come about in this moment, and I, like so many of us, have felt it for years,” Saval said, according to a transcript of his remarks provided to the Capital-Star. “Indeed, five years ago, after one of then-candidate [Donald] Trump’s hateful speeches, I was physically attacked on the streets of my own city, in the district I would come to represent, by someone who simply associated my skin color with immigration. Today, and every day, like thousands of us across Pennsylvania, I fear just such another attack.”

That triggered Dush to respond with a weird bit of whataboutism, arguing that infectious disease expert Dr. Anthony Fauci had used a racial epithet before Trump to describe the virus. As early as last March, Fauci said he would never use the slur to describe the virus. Trump, meanwhile, repeated the racial slur during an unrelated interview on Fox News on Tuesday night, Newsweek reported.

Dush, a white Christian, has the luxury of being disturbed by his colleague’s comments. But Saval doesn’t have that luxury. And it’s a sure bet that his Black and Brown colleagues in the Armed Forces lived the reality of the nation’s institutionalized racism — even if Dush claims not to have seen it. Most whites don’t.

Dush further faulted Saval for jumping the gun on the motive for the shootings, which may have been prompted by reports about the accused shooter’s alleged sexual addiction, rather than racism, as our sibling site The Georgia Recorder reported. Authorities still have not ruled out racism as a motive. Either way, the context of anti-Asian hate hangs heavy — and inescapably — over this incident.

Whatever the motive, it doesn’t change the fact that eight people, many of them Asian women, are dead. Nor does it change the reality of increased and documented racism and violence against Asian-Americans. All of which Dush blithely papered over with an ill-considered defense of the former president and some bromides about William Penn.

In a since-deleted Tweet, the Senate Republican Campaign Committee, which is the re-election arm of the Senate GOP, got into the act, blasting Democrats for “using a tragedy to spew your talking points against your political enemies,” an act that was markedly absent of any semblance of sympathy for the dead.

Still, an audio transcript of Dush’s remarks reviewed by the Capital-Star did not include any sympathy for the dead, nor was there any expression of support for Pennsylvania’s Asian-American community, which has found itself on the receiving end of despicable acts of hate. He at least had the presence of mind to argue for the need for a “good, solid dialogue,” presumably about race-relations. Still, to call that a missed opportunity is an understatement.

Instead, Dush called for Saval and others to stop being so divisive, which is about as tone deaf a response to the tragedy in Atlanta that one can imagine, adding, “We need to make sure that we’ve got the facts before we go spewing the types of things that I’ve been hearing of late.”

A brown-skinned Pennsylvanian pointing out violence against other brown-skinned Pennsylvanian isn’t “spewing” or being divisive. He’s reflecting his own lived experience, and the lived experience of everyone who looks like him, and have to find their way through a society that, as the last year has so amply demonstrated, has a long way to go if it truly wants to live up to its founding ideals.

Dush, whose rural and overwhelmingly white Pennsylvania district is galaxies away from the experience of Black and Brown Pennsylvanians, had an opportunity to really listen, and profit, from his colleague on the other side of the aisle.

It’s an outrage that easily should have transcended party lines and led to a moment of unity that some crave they want so badly. The fact that that didn’t happen on Wednesday just compounds the tragedy.

Our Stuff.
Faced with limited Republican backing, an emergency amendment that would provide justice to childhood victims of sexual assault is on thin ice in the state House, Elizabeth Hardison and Stephen Caruso report.

The Biden administration’s COVID-19 stimulus could pump $1.4 billion into Philadelphia’s  strained budget coffers, our partners at the Philadelphia Tribune report.

On our Commentary Page this morning, occasional contributor Andrea Custis, of the Urban League of Philadelphia, warns that Pennsylvania and the nation are facing a coordinated attack on voting rights by Republican lawmakers in state Capitols and Washington D.C. And opinion regular Mark O’Keefe argues, persuasively, that the Pennsylvania Gaming Control Board has become an overpriced patronage dumping ground for both parties. And it’s overdue for reform.

Elsewhere.
Leaders of all four suburban Philadelphia counties are pushing the state to give them vaccine doses — without a mass clinic — because they say the clinics only would deepen inequities, the Inquirer reports.
Pittsburgh-area hospitality workers say they should be prioritized for vaccinations, the Post-Gazette reports.
PennLive has scenes from Saint Patrick’s Day festivities across Harrisburg on Wednesday night. They are notably mask-less.
The results of an audit of postal service delays — that includes the Lehigh Valley’s main sorting plant — is expected in the spring, the Morning Call reports.
The mass vaccination site in Lancaster County has expanded its call center hours, LancasterOnline reports.
Walmart has announced a new COVID-19 vaccination clinic for the Hanover area in Luzerne County, the Citizens’ Voice reports.

Asian-American communities in the Philadelphia area are on edge after the shooting in Atlanta, WHYY-FM reports.
The race for the Pennsylvania Supreme Court kicked off with a virtual forum, WHYY-FM also reports.
Erie officials want to build a road through some cherished local ravines, GoErie reports.
A growing number of cities are weighing tribal ‘land acknowledgments,’ Stateline.org reports.
No, the Senate probably isn’t going to move on gun background check reforms, Roll Call reports.

Heavy Rotation.
Here’s one from Noel Gallagher’s High Flying Birds that popped up on shuffle last night that I hadn’t heard for a while. It’s the rollicking ‘AKA What a Life.’

Thursday’s Gratuitous Hockey Link:
The Rangers stomped the Flyers 9-0 on Wednesday night. New York’s Mika Zibanejad had a heckuva night, notching a hat trick and three assists on the way to the win.

Why this trial was different: Experts react to guilty verdict for Derek Chauvin | Opinion

In the Pa. Senate, an object lesson in how not to respond to a national tragedy | Thursday Morning Coffee