It’s the second week of March – which means that ‘500 Men Reading Week’ is in full throttle here in Harrisburg.

I was made aware of this initiative a few years ago through my now-good friend Jamar Johnson, who’s the co-chairman of this very important event taking place in schools across Harrisburg.

This year marks the third year in a row that my school, Premier Arts and Science Charter School, where I am a teacher, has participated in “500 Men Reading.” And I have to say that each year has been monumental for me, because I’ve been able to convince friends and strangers alike to get involved as well.

I have to give thanks to Floyd Stokes, the founder of the American Literacy Corporation in Harrisburg, for working so hard to stress the importance of reading to our youth, and for reaching across the racial divide, to convince so many men of the validity of this mission.

Now we’ve all heard the saying that “Reading is Fundamental,” and I won’t bore you with the statistics that prove that saying true. But I will share with you a real-life experience that made me a literacy advocate.

During my pre-teen years, I no longer found excitement in reading.

In fact, I would cringe in my seat every time my sixth-grade teacher started up a round of “Popcorn,” a game where one student reads a passage and then randomly picks a classmate to pick up the narrative. Because

Because I lacked confidence while reading in front of people, I would read ahead just to make sure I knew every word.

There would also be times when my classmates would tell me a word because they were frustrated with me, only giving me a half-second chance if I stumbled or seemed stuck on an unfamiliar word. That just served to further undermine my confidence.

I share this elementary school experience for a simple reason: While many children find joy in learning to read at a young age as they learn to identify the words they’ve been speaking for years, that’s not the case with all children. Some fall behind. They struggle to build their vocabulary. Some may second-guess whether they really know how to read at all. And some, worst of all, just stop reading as a result.

But because Floyd Stokes created a week where such local men as Jonathan Williams, Jamar Thrasher, John Micek, Brad Gissinger, Gary Miller, Robert Hackenberg, Ted Knorr, Basil Talib and Shawn Zeiders — along with hundreds of others —  could walk into local schools, lead by example, and read to children, they’re helping to instill a love of reading in a generation of young people. 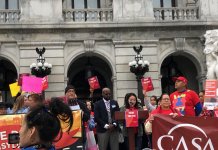