hometown. And it’s because of that I know it will take efforts by both Harrisburg natives, current residents and recent transplants, all working together to achieve the oversized checklist of “things that need to be fixed”  that many of my elders and peers have created over the year.

I recently heard from a woman named Myra Blackwell, who reached out after reading a few of my previous Capital-Star columns.

A Philadelphia native who’s been living in Harrisburg since 2012, she’s the founder of the College Prep Workshop, and she’s made a name for herself by holding college prep workshops across central Pennsylvania over the last few years.

She has another such workshop teed up for Feb. 1 from 9 a.m. to 11:30 a.m. at Bethel AME Church in Harrisburg. The event is focused on students in grades 9-12, and while admission is free, she’s asking prospective participants to email her by Jan. 25 to confirm their attendance.

Blackwell told me that she’s noticed a “void,” when it comes to some students’ interest in pursuing an education past high school. She attributes much of this to the fact that too many high school students aren’t equipped with the knowledge they need to further their education.

It’s because of this need that Blackwell is starting her February workshop with the basics. Topics on the agenda include, “How to Prepare for College While in High School;” “How to Apply to College;” “Which Options are Best for You;” “Financing A College Education,” and “How to Apply for Financial Aid.”

As time evolves, so does the algorithm of being educated on just about everything life offers. The way students apply for colleges, financial aid, and housing between 2012 and 2020 alone looks so much different from 2004 when I applied for college.

So, if it was frustrating for me all those years ago, imagine what it’s like for the parent or grandparent who experienced applying for college a decade or more before I did. And then try to imagine what that must be like for those who never experienced it at all.

To ease those concerns, Blackwell said she’s spent the last five years working to create a judgment-free space, where students and parents alike can feel comfortable to ask the questions they need answered to help them prepare for post-secondary education.

All of the workshops at the Feb. 1 event will be led by professional facilitators, who come from Harrisburg Area Community College, Temple University, the Pennsylvania Higher Education Assistance Agency, and Scholar Prep and Tutoring, of York.

Other scheduled attendees include Victor Rodgers, the associate provost of workforce development, at HACC, who will discuss trade school opportunities. Such local college graduates as Jayson Davenport, a graduate of Lincoln University, will share how they prepared for, and managed, their post-secondary educations. I’m sure that Blackwell, a graduate of Old Dominion University, and a proud member of Sigma Gamma Rho, will share her perspective as well.

Over the years, Blackwell has drawn participants from beyond the Harrisburg area, with students from York, Allentown, and Lancaster making the journey to educate themselves on the post-secondary education process.

Again representation matters when it comes to inspiring our youth. And Blackwell has been rewarded with a phone call from a parent from Lancaster who has brought her daughter to this workshop, simply because she was the only Black student in her class, and she needed to witness facilitators discussing post-secondary education options, who represent her in some way.

People have been and still are oppressed throughout the country. Education means power.

How do we change that experience, for me it’s simple, continue to “do your work” as Harrisburg activist Julia Mallory so often says. I know so many people who claim they are just ordinary people. But as the saying goes, ordinary people do extraordinary things. And Myra Blackwell is simply doing just that

Anwar Curtis, of Harrisburg, tells the stories of the people of Pennsylvania’s capital city. His work appears frequently on the Capital-Star’s Commentary page. Readers may email him at [email protected]. 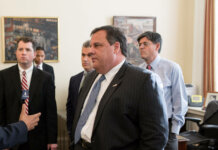