“This behavior is a common precursor to socialism/communism.” (AmericanOne)  “Without the comments, how are we ever going to learn the truth?” (Clinocchio)   “Silencing the masses and censoring the intelligent. I’m shocked.”  (Swampman32)

These are just three of the nearly 900 comments to the announcement that the local news site pennlive.com is discontinuing comments on its website.

“One of the biggest flashpoints for controversy in PennLive’s 20-plus-year history hasn’t been the news. It’s been the comments. Despite the invested time, money and effort, it’s also failed to dampen a pervasive tone of incivility and mean-spiritedness,” Cate Barron, the vice president of content at PA Media Group, PennLive’s parent company explained.

I know what she means.

Prior to being invited to share my musings for the Pennsylvania Capital-Star, my opinion pieces were posted monthly on Pennlive.com and published in The Patriot-News for over six years.

The Capital-Star’s Editor, John L. Micek, then PennLive’s opinion editor, asked me to submit a monthly column, one that reflected my views on matters of social importance.

He sought a community voice to spur conversation and thought. During those years I wrote about, among other matters, school and other academic topics; I expressed myself on the terrific care I received in local hospital after emergency surgery; I spoke against charter and home schooling; I called for citizens to elect servant leaders rather than career politicians and demagogues. Never were my perspectives malicious or designed to engender controversy.

But then came the comments. For instance, I was labeled a Communist (of course) more than a few times. I was accused of never having had a real job because I was a public school teacher. Contrarily, one commenter claimed I knew nothing about public schools and should keep my opinions to myself; in that instance I did break my rule about not replying to anonymous comments and responded that, per my printed bio, I had taught for 33 years in a public high school.

So much for Micek’s hope for thoughtful conversation. Incivility and mean-spiritedness became de rigueur for those posting under daft noms de guerre instead of their real names.

The comments became more vitriolic when my columns took on a more political tone as I wrote about the current narcissistic, fact-challenged president and his policies that grated against my personal values. His minions responded with predictable acrimony. Boorishness reigned from the right, reactionary remarks that academic studies had already predicted would occur.

A study about incivility in online discussions notes, “Our findings also show that these effects [what social scientists have labeled “nasty effects”] are strongest for those who hold strong conservative ideological viewpoints. Thus, our study points to the increased polarization that can occur along existing divisions in society when incivility is present in online comments.”

The effects of online incivility spread beyond the world of digital trolls and flamers.

From a New York Times article on the decreased civility in our nation come these findings: “Unfortunately, we’ve seen a decline in civility and an uptick in incivility,” said Christine Porath, a Georgetown University professor and author of “Mastering Civility,” a book on behavior in the workplace.

“It seems like people are not only reciprocating, but we tend to stoop lower rather than higher. It’s really putting us in an unfortunate place,” Porath said the current harsh climate was affecting people beyond politics, injecting itself into everyday life at home and work. ‘We know that incivility is contagious,” she said. ‘It’s like a bug or virus. It’s not only when people experience incivility, it’s when they see or read about it.”

Yes, it’s a time of giving. But it needs to last throughout the year | Lloyd E. Sheaffer

It seems, then, that the decision to end online comments being made by news sites across the nation might add to the greater health and well-being of their communities and beyond.

Another article about social media and incivility reports, “Civil discourse is a key to a healthy democracy,” said Pam Jenkins, president of Weber Shandwick Global Public Affairs. “The public has identified our civility problem, and it is now up to all of us to encourage the solutions that will make our government and society work better.” The authors offer some suggestions how to encourage more civility in these uncivil times:

One point I want to emphasize about this entire issue is that in no case is anyone discouraging genuine, productive discussion or sincere discourse among those with opposing views.

In fact, news sites such as pennlive.com continue to offer numerous ways to for readers to comment on articles and op-eds.

For instance, Barron writes in her article, “Despite this major change, we want to emphasize that we remain eager for your feedback — now more than ever. Readers will still be able to comment on the many stories we post daily on Facebook, Twitter and other social platforms. As always, you can click the byline on any story to email that reporter.”

What to do about our paralyzed Congress? | Lloyd E. Sheaffer

“The Pennsylvania Capital-Star is always open to hearing from its readers. They can reach out to us on our Twitter and Facebook pages, as well as through email,” he told me. “Our parent organization, The States Newsroom Project, made the decision late last year to shutdown online commenting on our articles and commentary pieces. The commenting environment had not only become excessively vitriolic, it was also prone to chronic spam. And because our newsrooms are so small, it was not a productive use of time our effort to moderate offensive posts and to clean out the junk comments. In our year of existence, we’ve loved interacting with readers and supporters across Pennsylvania, and our door is always open to them.”

In my classroom years I always encouraged my students to share diverse ideas, to challenge each others’ views, to consider objectively the value of opposing perceptions. They grew intellectually, and sometimes emotionally or socially, through these respectful exchanges. I am sad that so many of our children and youth are being exposed to rancor and animosity instead of courtesy and graciousness.

Let us all work to exchange ideas and debate important issues with comity rather than hostility.

In the spirit of this piece, I invite you to share your thoughts, whatever they are, with me with the request that you use your real name. My contact information is posted below. 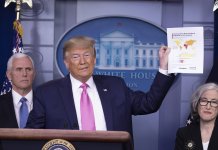 How Trumpism is threatening judicial independence in Pennsylvania | Opinion

Getting rid of online comments doesn’t mean the end of dialogue. But it does mean the start of civility | Lloyd E. Sheaffer

Survey: Under Trump, America’s overseas standing takes a hit | The...

How Trumpism is threatening judicial independence in Pennsylvania | Opinion