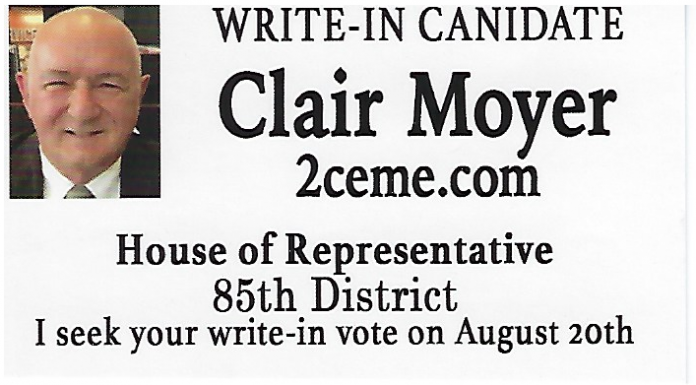 Two big things are happening tomorrow: John is coming back from vacation, and Pennsylvania is hosting yet another special election.

The state House election in the 85th District on Tuesday will be the seventh special election this year, Reporter Stephen Caruso writes in a preview of the race.

The seat was last held by Republican Fred Keller, who is now serving in Congress. The district is solidly red, having gone for gubernatorial candidate Scott Wagner and GOP Senate candidate Lou Barletta by wide margins in November 2018.

So Republican candidate David Rowe should expect to prevail over Democrat Jennifer Rager-Kay right? Not so fast!

Enter Clair Moyer, a registered Republican who is running as a write-in candidate. His beef? The way special election candidates are selected by party leaders.

“This all boiled down to one or two people’s choice,” Moyer told Caruso. “All the voters have to do is ratify the choice. I disagree. That’s not democracy.”

Check back in Tuesday night for the results. In the meantime, catch up on the race.

Our Stories
In Washington, D.C., Bureau Chief Robin Bravender looks at U.S. Sen. Pat Toomey‘s leadership on gun control after Sandy Hook and asks — will the Republican be able to get a background checks bill over the finish line this time?

On our Commentary Page, Misericordia’s Joseph Rogan writes about how the college admissions scandal hurt students with disabilities.

Also in Commentary: Too many people think satirical news is real.

Elsewhere
Union workers were given the option to attend President Donald Trump‘s speech at the Shell cracker plant or take the day off without pay, the Post-Gazette reports.

Learn more via Billy Penn about Charles Ramsey, the ex-top cop in Philly who Gov. Tom Wolf has tapped to lead the state’s anti-gun violence efforts.

York Daily Record: People not convicted of a crime still end up on Pennsylvania’s ChildLine and Abuse Registry.

Get ready for another special election | Monday Morning Coffee