So I’ve been thinking a lot lately about the notion of liminal space.

If you don’t know what liminal space is, it’s that in-between time, when you’re moving from one period of life to another, or one era of history to another.

The Rev. Richard Rohr, a Franciscan friar whose work has come to mean a great deal to me over the last few years, says liminal spaces “can feel stressful — and sacred.”

He continues: “In liminal space, we must leave business as usual—which often looks like a sleepwalking trance through daily life if we are not conscious—and voluntarily enter a world where the rules and expectations are quite different. Some call it ‘voluntary displacement.’ When we wake up in this way and find ourselves on the threshold of something new, we are shocked into realizing that our usual trance state is not the only option, and there might just be something more.”

More importantly, when we’re “in these way stations between disorder and reorder, we are invited to do more than just wait.”

And it occurs to me that’s exactly where we are a country, as a state right now.

The COVID-19 pandemic blew the doors off so many socio-economic and racial disparities that were bubbling just below the surface.

With thousands flooding the streets to protest the death of George Floyd, and to call for reforms to a broken and corrupt system that devalues the lives of too many of our Black and Brown fellow citizens, those who have not already been aware of these fundamental inequities have been shocked out of what Rohr describes as a “trance state,” and into action.

And so now we’re in that liminal space, that difficult time between leaving what we were and becoming what we are. We may not have chosen the time, as U.S. Rep. John Lewis, D-Ga., has said. But the time has surely chosen us.

People are marching. They’re reading. They’re donating. They’re listening. They’re getting out of the way so that voices that need to be elevated so badly can be heard with bullhorn clarity.

“I don’t think we’re going back to normal,” state Rep. Malcolm Kenyatta, a Black Democrat from Philadelphia, said Thursday during a conference call with journalists. “The people are demanding different.”

The question, of course, is whether anything will actually change.

In Harrisburg on Thursday, Gov. Tom Wolf rolled out a package of police reforms, crafted in consultation with Black leaders and lawmakers that would, among other things, standardize training for law enforcement officers on deescalation and the use of force, as well as create state and local advisory boards to review “incidents that lead to injury or death,” the Capital-Star’s Stephen Caruso reported. Wolf also threw his support behind a long-stalled package of police reforms backed by Black lawmakers.

“This is a call for reflection, improvement, and most of all, for learning,” Wolf said during a Thursday news conference. “We must rise to the challenge because too many people have lost faith in our public safety institutions, and to our institutions in general. We cannot lose further sight of the legitimate injustice that gave rise to the protests in the fist place.”

In a near simultaneous announcement, Wolf’s fellow Democrat, Attorney General Josh Shapiro, announced he had reached an agreement with police chiefs and unions to support legislation that will create a confidential statewide database of police records for hiring purposes, Caruso also reported.

Law enforcement split on the news: The union representing Pennsylvania State Police troopers, who are under Wolf’s authority, criticized the proposed reforms. The state office of the Fraternal Order of Police offered a different message.

The FOP “is fully aware that this incident in Minnesota has diminished the trust & respect that many in our communities have for the men & women of law enforcement. We are firmly committed to working with stakeholders to create an environment of healing, understanding & trust,” they said in a statement.

That’s an important sign, because where the FOP goes, Republican leaders in the General Assembly tend to follow. In a statement, Senate Majority Leader Jake Corman, R-Centre, said the goal for lawmakers “should be to help police and protesters come together and find common ground, not drive them further apart.”

Corman’s statement offered neither support nor condemnation of Wolf’s proposals, saying instead that lawmakers and the administration “have worked together to pass sweeping, bipartisan criminal justice reform measures in recent years, and more bills are moving through the legislature. We are committed to engaging in a constructive conversation about how we move forward together.”

On Thursday, Kenyatta and other Black lawmakers were skeptical that, given their past history, the GOP majorities in the House and Senate would move on anything at all, offering the not entirely surprising suggestion that only Democratic control of the Legislature would shake things loose. One former Capitol insider predicted some progress.

But I come back to Rohr’s admonition that, in liminal space, we “must leave behind business as usual.”

That’s a tall order for one of the nation’s largest — and least effective — legislatures. But this time, both the eyes of history, not to mention the voters, are on them. And thousands are in the street screaming for change and risking life and limb in pursuit of it.

On Thursday, Wolf said that “as a democracy, it is our duty to continually build a better democracy. And right now our resolve is being tested.”

The test right now is whether those are just words, or whether Wolf and the General Assembly will translate them into actual action. The price of failure, of inaction, isn’t just academic. It’s literally life and death.

Because, God forbid, the next time a Black or Brown Pennsylvanian needlessly loses his or her life in a confrontation with law enforcement, all roads will lead back to Harrisburg.

We’re in liminal space now. We’re confronted with a choice. The people are voting with their feet and their bodies. There’s only one right way forward.

Pennsylvania officially emerges from a months-long stay at home order this Friday, as half of all counties go green and the other half enter the yellow phase of reopening. Your humble newsletter author fired off a dispatch about it.

It was a busy day for Erie Correspondent Hannah McDonald, who finds city police splitting linguistic hairs over whether cops called to assist in protests were quarantined after previously coming into contact with a COVID-19 person or were just ‘exercising an abundance of caution,’ by following a stay-at-home order. County officials and state lawmakers also want Erie County to be included in the green zone of reopening.

In Philadelphia, activists called on city police to stop using tear gas and rubber bullets, our partners at the Philadelphia Tribune report.

On our Commentary Page this morning: Already rickety, American exceptionalism can’t survive another four years of President Donald Trump, contributors Michael and Krista Cozzillo write. And two University of Colorado/Boulder scholars say America has a grand tradition of protest that goes all the way back to the Founders.

Elsewhere.
Writing for PhillyMag, the four, newly elected Black members of Philadelphia City Council weigh in on the removal of the Rizzo statue, the anger driving the current protests, and other matters.
The Post-Gazette has removed a Black reporter from protest coverage because of a sarcastic tweet about the mess left outside a Kenny Chesney concert tailgate, Pittsburgh City Paper reports.
Harrisburg City Council has vowed to tackle police misconduct and abuse, ‘The Burg reports.
The Morning Call has the details on simultaneous protests held in Allentown and Bethlehem on Thursday.

An image from yesterday’s #blacklivesmatter protest in #harrisburg. Today, Gov. Wolf, who marched in that protest, released a multi-part plan designed to improve police training and accountability. Article link in bio.

Protests in Philadelphia continued into a sixth day. WHYY-FM has the details.
The Centre County District Attorney’s Office, joined by the county sheriff and several area police chiefs, has released a statement calling George Floyd’s death ‘criminal and inhumane,’ WPSU-FM reports.
The D-Trip has made a “multi-million dollar ad buy,” in Pennsylvania, PoliticsPA reports.
Two dozen experts explain to Politico why things are really different this time with the wave of protests sweeping the nation.

You Say It’s Your Birthday Dept.
We are reliably informed that the man who keeps us in op-Eds, Mustafa Rashed, of Bellevue Strategies in Philadelphia, celebrates on Sunday, and that it might have been #BIRTHDAYGOALS for him to get a mention here. You’re hitting for the cycle, sir. Happy Birthday, in advance, and many happy returns this weekend.

Heavy Rotation.
Here’s one from the legendary Curtis Mayfield. It’s still a clarion call. It’s ‘Move On Up.’


Friday’s Gratuitous Hockey Link.
The Hockey News has a critical conversation with the sport’s Black community on racism inside and outside of hockey, and where to go next. 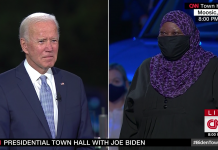