From ‘Folklore’ to the Bronze Age collapse: 3 things that kept me sane in 2020 | John L. Micek

The end of this sad, strange, historic and transformative year is almost upon us. And like a lot of you, I found myself burrowing into ritual, structure and, of course, the obligatory loaves of sourdough, to fill up those hours of social isolation thrust upon us by the COVID-19 pandemic.

But of course, you can’t live on pandemic sourdough alone. So here’s a quick list of the books, music, and bits of culture that provided some peace and tranquility amidst the frantic hours of work, moments of mourning, and surprising intervals of joy and extreme gratitude that made up my 2020.

When you’re staring down what feels like the end of history, it’s only natural to wonder if we’ve been here before, and what lessons those times of trouble hold for us now.

This slender, but massively weighty volume, by George Washington University classicist Eric H. Cline, takes up one of the great mysteries of human history. In 1177 B.C., after centuries of brilliance, the civilizations of the late Bronze Age Mediterranean came to an abrupt and cataclysmic end. Over the space of a generation or so, the Mycenaeans, the Minoans, the Hittites, and the Babylonians, slid into irreversible decline, vanishing from history, as the region slid into a centuries-long dark age that didn’t end until the emergence of what we now know as the classical era around 750 B.C.

Historians are still trying to unravel the interconnected calamities, which ranged from incursions by seaborne groups of marauders collectively known as the “Sea Peoples” and internal unrest, to the severing of sophisticated regional trade routes, that hastened the end of the Late Bronze Age. While it’s a very foreign world in a lot of ways, it’s also one that is recognizably our own, reminding us that civilization is a delicate thing that needs to be tended to and nurtured if it is to survive.

For all the ink that’s been spilled about the death of the monoculture, July’s surprise release of Taylor Swift’s ninth record was a throwback to those seemingly bygone years where we were all listening to, and dissecting, the same records at the same time.

The minimalist, folk-imbued electronica that Swift crafted in lockdown with The National’s Aaron Dessner, and longtime collaborator Jack Antonoff of Bleachers, was just the sort of quiet escapism that we were all looking for as we came blinking into the sun of what ended up being a short-lived, post-lockdown world.

If there was any doubt about Swift’s skills as a songwriter, this record should have silenced even the most vocal of skeptics. Stripped of stadium frippery and the big choruses that have marked her last couple of recorded outings, Swift plays to her strengths here. She boasts a novelist’s eye for detail, as evidenced by the acerbic tale of 20th-century socialite Rebekah Harkness on “The Last Great American Dynasty.” And her capacity for searingly personal song-craft remains intact with “Epiphany,” which deals with a person’s final moments. And while not specific to the pandemic, its lines about “Someone’s daughter, someone’s mother [holding] your hand through plastic now,” could not help but resonate with those of us who said goodbye to someone we loved who was taken from us by the virus.

Sometimes the right record comes along at the right moment. Swift, ever adept at choosing her moments, found hers with “Folklore.”

After a concluding Skywalker trilogy that felt as overstuffed as often as it felt half-baker, writer/director Jon 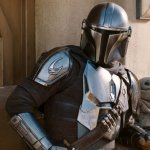 Favreau’s space western marked a welcome return to smaller-scale storytelling that managed to evoke the pulpy best of the original film series, while forging a ground that was uniquely its own. Pedro Pascal’s laconic bounty hunter Din Djarin, the Mandalorian of the title, channeled fan nostalgia for the bounty hunter Boba Fett of the original series, even as he established himself as a new and serious player in the sprawling mythos.

Fan service abounded throughout the series, with such favorites as Jedi Knight Ahsoka Tano being brought to vivid life by Rosario Dawson (who’s getting her own series). The resurrection of Boba Fett was another welcome (if slightly expected moment). And, of course, the surprise return of a certain legendary Jedi Knight in the Season Two finale (I’m not going to spoil it for you if you haven’t seen it) was one of those heart-stopping moments that the franchise excels at when at it’s at its best.

But there’s no doubt that the emotional center of the series, its entire reason for being, was the emerging father/child relationship between Mando and Grogu (don’t call him Baby Yoda anymore).

Some of the series’ sweetest moments came when Pascal’s bounty hunter let down his guard and allowed this impossibly adorable creature into his scarred heart. That journey into fatherhood — a theme across the franchise — is what keeps the Mandalorian from devolving into just another big-budget, Hollywood shoot-em-up.

Email me at [email protected] or hit me up on Twitter @ByJohnLMicek, I’d love to hear about your picks.

From ‘Folklore’ to the Bronze Age collapse: 3 things that kept me sane in 2020 | John L. Micek