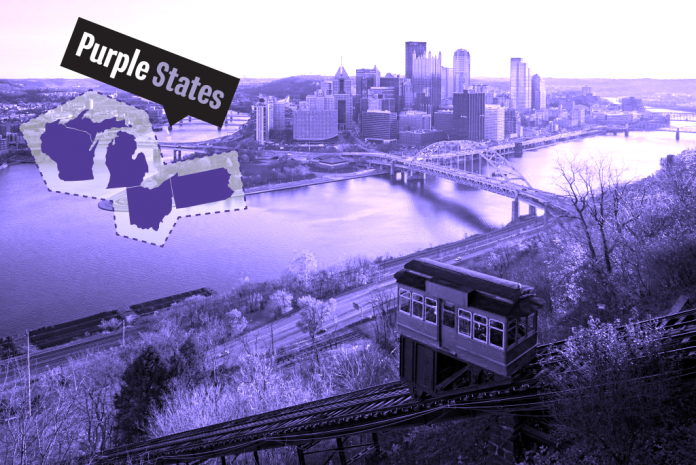 With the chaos of the Iowa caucuses behind us, and New Hampshire beckoning, it won’t be long before vote-rich Pennsylvania is besieged by candidate visits (already well-underway) and reporters in the national press who will

write the endless think pieces about What It All Means.

But before everything goes all Alabama in the Middle, and the nationals start pelting us with done-to-death Primanti Brothers and Pat’s Steaks references, we thought we’d take a moment, courtesy of some veteran political scientists, pundits, and a whole bunch of thoughtful and opinionated people on Twitter, to disabuse them of some of their Keystone State misconceptions.

This column is the first installment of The Purple States Project, a joint effort between the Capital-Star and our sibling sites, the Michigan Advance, the Wisconsin Examiner, and the Ohio Capital Journal.

From now until November, our four sites in the States Newsroom network will be taking an in-depth look at the issues, the people and the policies that matter to voters in the four states that could well determine who wins the White House.

With that obligatory boiler-plate out of the way. Let’s get started. First up, the experts.

Fletcher McClellan, Pennsylvania Capital-Star opinion contributor, Elizabethtown College political science professor: “The line attributed to James Carville that Pennsylvania is Philadelphia, Pittsburgh, and Alabama (or Alabama without black people) in the middle still has some truth in it. But much has changed. Allegheny and Centre Counties are now Blue islands, surrounded by an increasingly Red landscape. Philly Blue has extended into the suburbs, stretching into the Lehigh Valley and even Lancaster County. At the same time, the historically Blue Northeast is quickly turning Red. At its most competitive, Pennsylvania politics has become the Southeast, urban pockets, college towns, and suburban professionals (such as those on the West Shore) versus the rest of the state.”

Christopher Nicholas, Republican political consultant: “In no particular order: Only Philly has suburbs‎ that are of import; that the western Pa. ‘blue collar’ vote is monolithic; that Democratic Party endorsements are vital, and the GOP holds majorities in the state Legislature “only/primarily” because of “gerrymandering.”

Christopher Borick, political science professor, Muhlenberg College: “You often hear outside analysts say that you can’t win statewide races in Pennsylvania without winning the Philadelphia suburbs, and while those collar counties can have a big impact on Pennsylvania election results, 2016 proves that there are still other paths to [winning] a statewide race.  Hillary Clinton dominated in the Philly ‘burbs and became the first Democrat to lose the state since Michael Dukakis in 1988. With population in the state concentrating more in the southeast a day may soon come when a solid victory in the suburbs all but guarantees a statewide victory, but we aren’t there yet in 2020.”

G. Terry Madonna, political analyst/pollster, Franklin & Marshall College: “One of the enduring myths is the extensive coverage of Pennsyltucky. Yes, it refers to rural and exurban Pennsylvania, and specifically the Appalachian parts of the state. [But] the state has become much more diverse and complicated, especially in the suburbs. So, yes, parts of the state are like Kentucky but many parts of it are more like the [northeastern U.S.]. The point is that sometimes the state is just characterized as Pennsyltucky and the stories don’t include the complexity of the state.”

And because the hive mind continues to be a beautiful thing, I threw the question out to Twitter, where, as you might imagine, there were no shortage of opinions. Here’s a random sampling of responses:

That they can get an accurate snapshot of the electorate by going to Diners or shopping malls at 10am.

That the Obama-Trump voters are a lost cause and none of them will vote for a Democrat in 2020.

that we're all constantly obsessed about fracking, blue collar jobs, and teacher unions.

There are an incredible amount of diverse sources that have a different and more interesting take than one former Governor. DC journalists don’t do a good job looking very hard for opinions outside of that one.

That it's all a Rust Belt state filled with non-college white people.

That we are in the northeast except geographically

We hope this little talk helped.

These are the greenest states in the U.S. How’d Pa. do? | Friday Morning Coffee