On the day he died, Jake Schwab went to work like he did on any other morning, looking forward to tackling the projects ahead of him.

The 48-year-old Erie Metropolitan Transit Authority mechanic and avid motorcycle enthusiast was assigned to work on a bus from a different agency. Although he wasn’t familiar with the bus, Jake wasn’t daunted. He was good at his job, and, with 27 years’ experience, he was comfortable working on a range of vehicles.

But then, a problem arose: The lift equipment Jake requested was unavailable, forcing him to use different equipment in its place. As he was working, the equipment malfunctioned, and the bus shifted. A component of the suspension exploded, striking Jake in the head.

He died just days later, on Nov. 9, 2014, leaving his widow and the love of his life, Tiffany, to celebrate Thanksgiving alone.

Slipping through the cracks

As a mechanic for a public transit authority, Jake shared many things in common with private mechanics – except one: Unlike private-sector employees, Jake was not protected by the Occupational Safety and Health Act, and Pennsylvania has no state plan imposing comparable standards to protect public employees.

As a result, there had been no safety training in Jake’s garage for more than nine years, and there was no public investigation and report detailing the safety problems leading up to his death. Instead, Tiffany battled to receive details about Jake’s death from the insurance company.

Pennsylvania’s public workers don’t have workplace safety protections. This bill would change that

Tiffany Schwab and I are trying to prevent a repeat of what happened to Jake. For the past five years, we have been working to pass my legislation – the Jake Schwab Worker’s Safety Bill – that would give Pennsylvania’s public-sector employees the same protections as private-sector employees. Unfortunately, what should have been a reasonably quick fix has turned into an uphill battle.

To understand why Pennsylvania’s public-sector employees are not protected in the same way as private-sector workers, it’s necessary to understand the reach of the federal Occupational Safety and Health Act.

Administered by the U.S Occupational Safety and Health Administration, the federal act applies to private-sector employers and their employees only. For public-sector employees to be protected, states must enact their own OSHA-approved state plans.

Many other states have already done so. So far, at least 28 U.S. states or territories, including Virginia, North Carolina, and Kentucky, have adopted some form of OSHA-approved state plan. Unfortunately, Pennsylvania isn’t one of them.

As a result, our public-sector employees are left hanging.

How much of a difference does OSHA protection make in saving lives and preventing deaths on the job? A huge one, according to statistics.

The U.S. Labor Department reports that fatalities and injuries dropped dramatically after passage of the Occupational Safety and Health Act in 1970. That year, it’s estimated that about 14,000 workers were killed on the job. By 2009, the number had fallen to about 4,340. Similarly, the rate of serious workplace injuries and illnesses reported declined from 11 per 100 workers in 1972 to 3.6 per 100 workers in 2009.

When people learn that Pennsylvania’s public-sector employees – including our police, firefighters, correctional workers, transit workers, and all other public workers – are not protected by OSHA, they’re often shocked.  But shock has not been enough to move the legislature to remedy this safety deficit facing our public employees by passing my workplace safety bill.

I first introduced the Jake Schwab Worker’s Safety Bill – also known as HB1082 – the year after Jake’s death, in 2015.

Given the obvious need for action, I was hopeful that the bill – which would establish Occupational Safety and Health Administration-equivalent safety rules for public employers – would be voted out of committee quickly and come to the House chamber for a vote. I was also encouraged by the avalanche of support we received from workers and union members.

But the bill stalled in the Republican-controlled House Labor and Industry Committee.

I re-introduced the bill in 2017, and again it stalled in committee.

This year, I re-introduced the bill, and I will not quit until this life-saving legislation becomes law.

As Tiffany sits and waits, the question hangs over all of us: Why are the lives of Pennsylvania’s public-sector employees deemed less deserving of protection than those of private-sector employees? How long must they wait until we throw them the safety line they deserve? 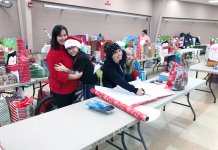 Enough is enough: It’s time to give our public employees OSHA-style protections | Opinion