From state capitols to the 2020 campaign trail, politicians of all stripes are getting ready for a world without the Affordable Care Act. And with a legal President Barack Obama’s signature legislative achievement destined for a deeply conservative U.S. Supreme Court, the probability of that outcome seems worrisomely high.

And with control of the White House on the line, that makes the political stakes even higher. The Democratic 2020 candidates have spent months touting their respective proposals (which can sometimes be tough for the average voter to keep straight).

In the absence of a coherent Republican counter-narrative, Democratic National Committee Chairman Tom Perez is launching a tour of key battleground states this month, including Pennsylvania, “to raise concerns” about the Trump White House’s approach — if you can call it that — to healthcare issues.

As Axios notes, polling data consistently puts healthcare and healthcare reform at the top of voters’ priorities list for 2020. And as Axios further notes, there’s evidence showing the issue might be Democrats’ greatest strength as primary season truly gets underway.

In addition to Pennsylvania, Perez’s tour will take him to Florida and Wisconsin, where party leaders will also meet with union leaders and the minority communities that are key to a Democratic win in November.

An event in Miami will “include a roundtable discussion on Democrats’ plans for health care affordability, including negotiating lower drug prices, and to argue that lawsuits and other moves by the administration to dismantle the Affordable Care Act have put coverage for patients with pre-existing conditions in jeopardy,” Axios reported.

Meanwhile, a political action committee that supports lower prescription drug prices, is dipping its toes into one of the most competitive congressional races in the country: The fight for Bucks County’s 1st District that will pit Republican U.S. Rep. Brian Fitzpatrick against whomever emerges from a crowded Democratic primary field. 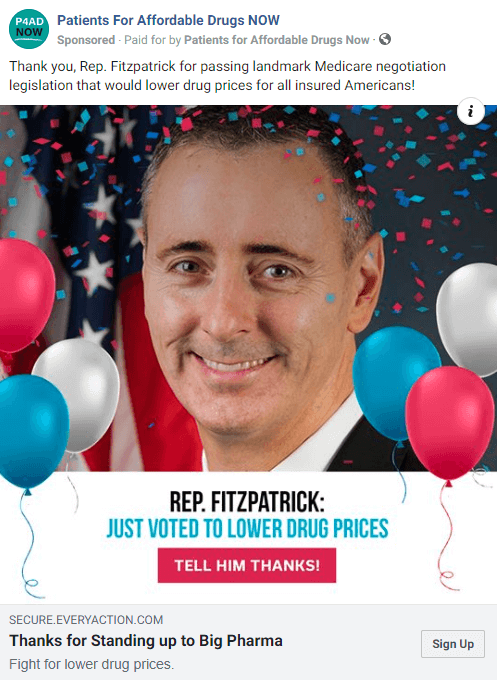 The group, Patients for Affordable Drugs Now,  launched a digital ad campaign this week thanking Fitzpatrick for his Dec. 12 vote in favor of a bill aimed at lowering drug prices. It has zero chance of passage in the GOP-majority Senate and President Donald Trump has said he’d veto it if ever reaches his desk.

As Capital-Star Washington Bureau Chief Robin Bravender wrote at the time, Fitzpatrick was one of only two Republicans to break with the GOP to vote for the bill, which is largely seen as an election year marker for U.S. House Democrats.

“Drug prices are out of control, and millions of Americans are hurting,” David Mitchell, a cancer patient and the founder of Patients For Affordable Drugs Now, said in a statement. “Patients are choosing between filling prescriptions and buying groceries –– and it’s got to stop. We want to thank Rep. Fitzpatrick for standing strong against the pharma lobby and voting ‘Yes’ on H.R. 3.”

This isn’t the first time the group has gotten involved in Capitol Hill politics. In 2018, Mitchell’s group made headlines when it spent millions of dollars on midterm races that were largely seen as unwinnable, an industry trade paper reported at the time.

Fitzpatrick’s seat, a Democratic linchpin in 2020 that has been traded between the two parties over the last decade, has been ranked as “tilt Republican,” by Roll Call political analyst Nathan Gonzales.

Our Stuff.
Could a state tax on cell phones pay for rural broadband expansion? Stephen Caruso takes up that very question as Farm Show Week heads into its final furlong.

Maryland’s Republican governor, Larry Hogan, has told his Democratic attorney general to sue Pennsylvania in federal court for what he says is the state’s failure to live up to its commitment to clean up the Chesapeake Bay, Elizabeth Hardison reports.

Pennsylvania will likely lose a congressional seat as a result of the 2020 Census, Capital-Star Washington Reporter Allison Stevens explains why that’s such a huge deal.

Elsewhere.
The Inquirer explains how a trio of special elections are bringing out the big spender in House Speaker Mike Turzai.
A Pittsburgh faith leader will moderate a Democratic debate in Iowa, the Post-Gazette reports.
Two people were killed in a helicopter crash in Cumberland County on Thursday night, PennLive reports.
Former Allentown Mayor Ed Pawlowski talks to the Morning Call about life in prison.

The NAACP and ADL are partnering in New Jersey to fight hate crimes, WHYY-FM reports.
The Pennsylvania State Police have provided guidance for the sale of so-called ‘ghost guns,’ the PA Post reports.
West Philly Republicans have picked their candidate for ex-Rep. Movita Johnson-Harrell’s seat, PoliticsPA reports.
Stateline.org looks at how some states are making it too easy to buy lottery tickets.
Senate Majority Leader Mitch McConnell, R-Ky., expects the Senate impeachment trial to start as soon as next week, some GOP senators tell Talking Points Memo.

What Goes On.
The House Democratic Policy meets for a third day in Philadelphia, this time at the Crane Center on Vine Street for a 10 a.m. public hearing on a bill that would make it illegal to send someone an unsolicited sexually explicit image.

Friday’s Gratuitous Hockey Link.
Boston got past Winnipeg 5-4 on Thursday night. The B’s David Pastrnak scored a hat trick, tying the game with two goals in the third period.