The Pittsburgh skyline, viewed from the Duquesne Incline. (Dllu/WikiMedia Commons)

From the Duquesne Incline and Kennywood in the west to Hershey Park and the Poconos resorts, Pennsylvania is rich with tourist destinations big and small. But there’s no denying that the tourism industry took a hit during the COVID-19 pandemic. And as a result, states nationwide are bracing themselves for a hit to their bottom lines, thanks to the tax revenue they lost while those attractions were shuttered.

A new report by the Pew Charitable Trusts attempts to quantify those losses in all 50 states, finding that “leisure and hospitality employment dropped by more than 7.5 million jobs nationwide immediately following the business closures and travel restrictions issued in March.”

And about “half of the lost jobs, including temporary layoffs, have since been recovered in the industry, defined to include restaurants, drinking establishments, lodging, attractions, and related venues. Still, September job estimates remained down about 23% from February, three times the private sector’s total rate of decline,” researchers found.

Below, a look at the tourism jobs picture nationwide, where Pennsylvania fell, and how the Keystone State stacks up against its neighbors. 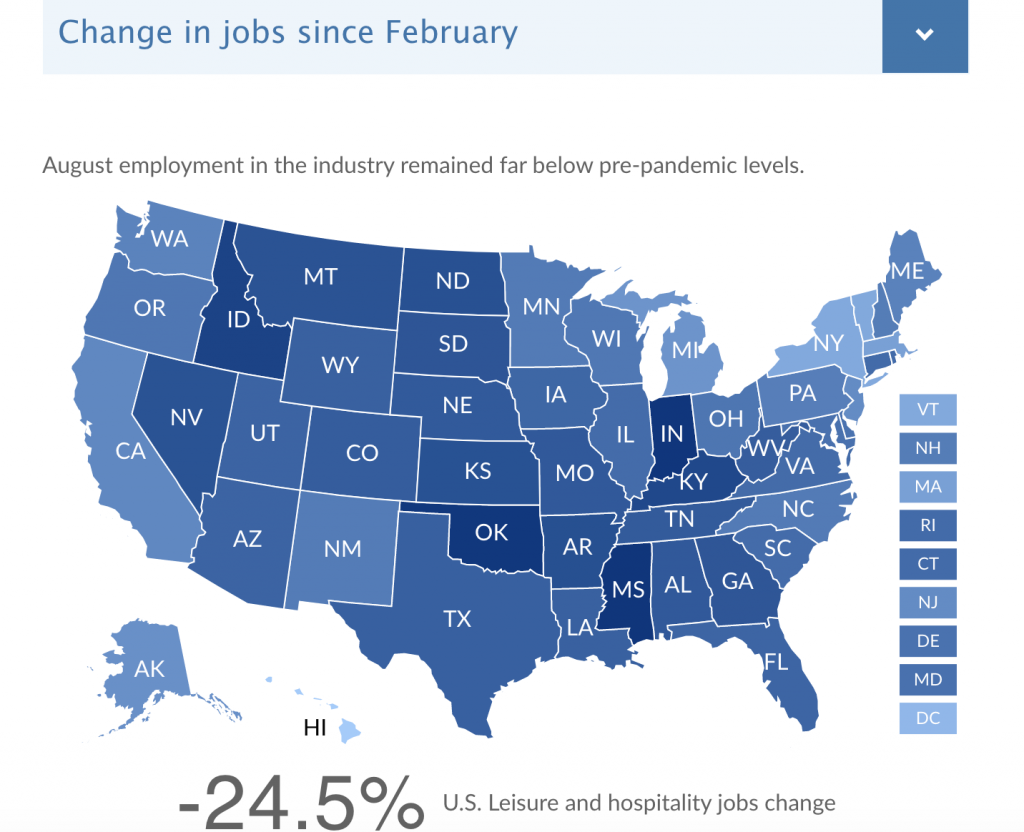 (Click through to full story to mouse over the graphic above for individual state results.)

Since February, Pennsylvania sustained a 29 percent loss, with tourism jobs declining from 584,000 in February to 414,800 by August, researchers found. That’s above the national tally of 24.5 percent. Tourism accounted for 9.5 percent of all jobs in Pennsylvania in 2019, according to the report.

As the report makes clear, the impact varies widely from state to state.

“Hawaii (-53 percent), New York (-42 percent), and Vermont (-42 percent) have sustained the largest percentage losses in leisure and hospitality jobs from pre-pandemic totals in February, while industry employment is down only 6 percent in Indiana and Mississippi,” the report found. But these jobs are more important to some states’ economies than others. The losses are most critical to Hawaii’s economy, where the sector accounts for nearly 1 in 5 jobs. The industry accounts for between 9 percent and 12 percent of total employment in nearly all other states.”

Pennsylvania voters likely will have to wait days to learn the outcome of races in the Nov. 3 general election, as Republicans who control the state House said Monday that they have no intention of changing state law to give counties a head start in processing mail-in ballots, Elizabeth Hardison reports.

Elections officials in Pennsylvania will be allowed to count absentee ballots up to the Friday after Election Day, as long as they’re post-marked by Nov. 3, the U.S. Supreme Court ruled Monday.

With COVID-19 cases spiking, Gov. Tom Wolf and state Health Secretary Dr. Rachel Levine called on Pennsylvanians to be vigilant Monday, again urging them to use masks and practice social distancing as the state tries to ride out a fall surge.

At the same time — and rather counter-intuitively, one could argue, Pennsylvania’s saloon-keepers called on the Legislature to override Wolf’s veto of a bill that would have lifted the administration’s restaurant and bar occupancy limits.

After barnstorming in Reading on Saturday, Vice President Mike Pence campaigned in suburban Harrisburg on Monday afternoon, where he tried to sew up central Pennsylvania for President Donald Trump.

On our Commentary Page this morning, our friends at The Conversation offer you 5 reads explaining why mail-in balloting is safe and reliable. And columnist Michael Coard, of our partners at the Philadelphia Tribune, offers his prescription for real electoral change.

Elsewhere.
With contract talks at a standstill, Philadelphia teachers could face their first strike vote in decades, the Inquirer reports.
A new lawsuit is challenging Pennsylvania’s requirement that a person be 21 years old to get a license to carry firearms, the Tribune-Review reports.
PennLive explains how Black voters are poised to tip the election (paywall).
Lafayette College in Easton has closed buildings and suspended sports because of COVID-19 cases, the Morning Call reports.
The Citizens-Voice checks in on voters in Luzerne County, where they were dropping off mail-in ballots.

GoErie has what you need to know about today’s Trump rally in Erie. Check the Capital-Star later today for coverage.
WHYY-FM looks at a bill now before the Legislature that could help performance venues that are struggling during the pandemic.
WESA-FM explains the ‘patchwork’ of eviction deadlines and extensions that are leaving renters and landlords alike confused.
The York Daily Record has the details on VP Mike Pence’s other Pennsylvania stop in York County on Monday.
A new Reuters/Ipsos poll shows Joe Biden statistically tied 49-45 percent with Donald Trump in the Keystone State (via PoliticsPA).

You Say It’s Your Birthday Dept.
Best wishes go out this morning to our old pal, Stephanie Sadowski, at LancasterOnline, who celebrates today. Congratulations and enjoy the day.

Tuesday’s Gratuitous Soccer Link.
Chelsea boss Frank Lampard is leaping to the defense of his battered back line. The Blues have conceded 63 goals in 43 league games, The Guardian notes.