Social distancing has changed nearly everything about American life, from the way we shop for groceries to the way we worship and go to school. One of the things it hasn’t changed, unfortunately, is the scourge of gun violence.

From Chicago to Philadelphia, stay at home orders have sadly proven no deterrent to America’s other major public health crisis. Bed space that is desperately needed for COVID-19 patients is being shared by gunshot victims. And healthcare professionals are crying out for help.

“I get these pages almost every night at the trauma center where I work. I rush to put on my protective equipment to guard against blood and other bodily fluids,” Dr. Elinore Kauffman, a fellow in surgical critical care and trauma surgery at the University of Pennsylvania, wrote in a recent New York Times op-Ed. “But for the first time, I’m saving clean masks to reuse them. Because of coronavirus, the parents of my patients need a special escort because visitors are not allowed in the waiting room. I can’t bring a family to a gunshot victim’s bedside in the intensive care unit. I can’t tell a frightened mother that she can stay as long as she wants.

“Doctors like me are trying to keep the world safe from the coronavirus pandemic. But thousands of families in America are already caught in the country’s existing epidemic: gun violence,” she wrote.

The Capital-Star recently spoke with one young activist who’s turned to digital media amid the shutdown to try to spread the anti-gun violence message; to encourage other young Pennsylvanians to register to vote, and when they do vote, to keep anti-gun violence measures front and center at the ballot box.

Our conversation with Kayleigh Wolfe, 16, a junior at Spring-Ford High School, and a resident of Limerick, Pa., has been lightly edited for content and clarity. Wolfe is a member of the anti-gun violence advocacy group Students Demand Action.

Q:  So how did you get involved with Students Demand Action?

Wolfe: “I got involved in Students Demand Action after Parkland, like many young people did.I wanted to prevent tragedies like that. Been a captain for a little over a year now. We contact students from all over the country about different issues that we’re focusing on at that point, the different actions they can do to prevent gun violence.

“I heard about the virtual field offices [that are opening up] and I wanted to get involved. So I signed up to be a leader. The virtual offices have three main goals – voter registration, mobilization and advocacy and campaigning. Our goal is to register 100,000 people across the country and thousands across Pennsylvania. We’re focusing on key battleground states, with Pennsylvania being one of them.”

Q: With the headlines swallowed up by the pandemic, and all the legislative action focused around coronavirus relief, it’s been hard for other issues, such as gun violence, to rise up. How are you trying to elevate the debate around gun violence reduction?

Wolfe: “Gun violence is a very serious crisis in this country, and in Pennsylvania. In Pennsylvania, more than 1,500 people are shot and killed every year,. It’s definitely a big issue, and it’s important to prevent it so we can save lives. One way to do that is to elect leaders who will help keep our communities safe from gun violence.

“It’s important to emphasize to people that coronavirus hasn’t stopped gun violence. Just because people are social distancing… there are shootings every day in cities like Philadelphia. It’s not stopping these shootings and gun violence.”

Q: So what does advocacy and outreach look like in the age of social distancing? How have you changed what you’re doing?

Wolfe: “It’s definitely an adjustment. With me already being part of the text team, we’re already used to that to do virtual advocacy and texting. It has prepared me for this time. It’s important to contact people through social media – that’s been a help getting people to register to vote.

” … We’re training volunteers in relational organizing, which is where you reach out to people you already know, and talk to them about why they should register to vote, and why gun safety should be an issue.

(To get the Students Demand online toolkit for information about registering to vote and to learn about mail-in balloting, text Future to 644-33.)

You Have the Right to Remain Infected Dept.
You’ve probably heard by now that a large number of people — could be thousands, could be hundreds, are set to descend on the state Capitol this afternoon to protest Gov. Tom Wolf’s stay at home order.

You’ve probably also heard that this “spontaneous” show of voter anger (some of which is genuine and understandable) is also being orchestrated by right-wing astroturf groups that have organized across several  midwestern states, who are being entirely egged on by the 45th *president of these United States.

If you haven’t, Staff Reporter Stephen Caruso’s recent Twitter thread about the forces that are behind these protests is definitely worth your time. 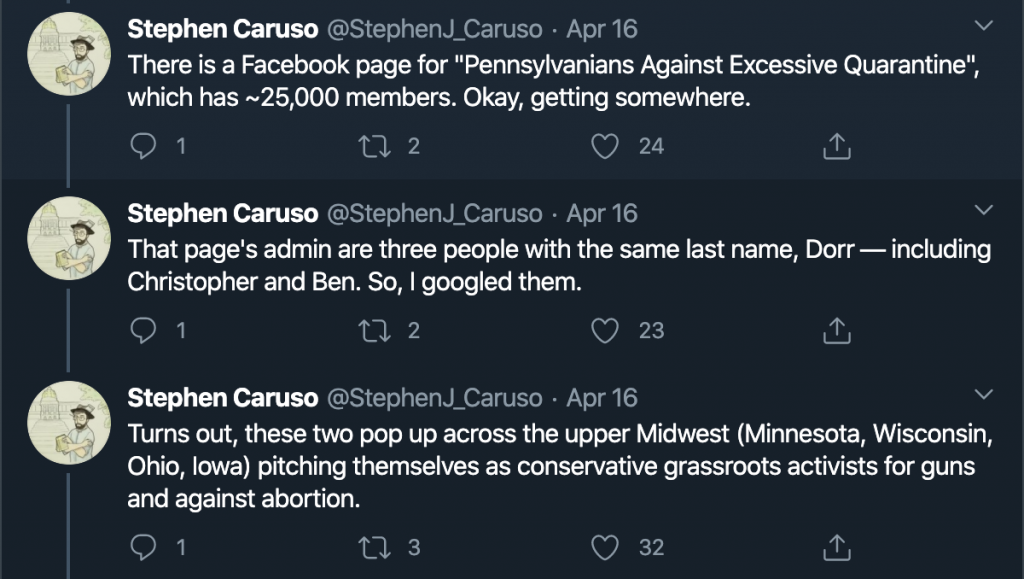 The same is true of this column by our colleague, Susan J. Demas, the editor of our sibling site, The Michigan Advance, which encapsulates, as only Demas can, the reckless stupidity of a similar protest in Michigan last week:

“We were promised it wasn’t a Republican protest. We were promised people were just upset they couldn’t golf or buy seeds (in stores) during a pandemic that’s already killed 2,000 of their neighbors.

“But the folks trekking to Michigan’s Capitol Wednesday weren’t carrying rakes or watering cans or cute pun-filled signs about the right to garden (which still would have been ironic, since it was snowing). No, they brought Confederate and Donald Trump flags, AR-15s and a Gov. Gretchen Whitmer doll in a noose.

“She’s the reason we need the 2nd amendment!” multiple people shouted from their cars.

At a briefing on Sunday, state Health Secretary Dr. Rachel Levine declined to comment on the possibility of any legal sanctions for protesters who show up a the Capitol, which is closed right now as a result of the pandemic.

Levine did have plenty to say about the public health risks of a mass gathering where protesters in other states have flouted social distancing restrictions.

If protesters stay in their cars, Levine said she doesn’t “expect any public health implications.”

If however, the same kind of AR-15 wielding knuckleheads as who showed up in Michigan last week “get out of their cars, and they are not practicing social distancing, if they’re not wearing masks, if they’re having personal contact, like shaking hands, etc. If they’re not frequently washing their hands and using hand sanitizer, and they come from … various areas of Pennsylvania, then that is a public health risk.” she said. “And I am concerned for their health that they will be diagnosed cases of COVID-19 — perhaps in people who have no symptoms or very, very early symptoms that they will they will pass that virus on to others. And some of those people could get sick. I mean, I think that would be a shame. So those are my medical public health concerns for the protesters themselves.”

Again, however odious the rhetoric, we’re huge fans of the First Amendment here at the Capital-Star. But this is exactly why we can’t have nice things.

Our Stuff.
Staff Reporter Elizabeth Hardison leads our coverage this morning with a first-rate explainer of how the pandemic has thrown a wrench into the workings of the Pennsylvania Board of Pardons, leaving people in prison, where they can be exposed to infection.

Associate Editor Cassie Miller takes a deep dive into March’s unemployment numbers, illustrating how badly the pandemic has disrupted the state’s economy. That’s in this week’s edition of The Numbers Racket.

Correspondent Hannah McDonald has this FAQ on the state’s mask-wearing guidance, which became subject to enforcement on Sunday night. And COVID-19 fatalities shot up Sunday, thanks to a change in reporting practices, McDonald also reports.

From our partners at the Philadelphia Tribune, a consortium of Black doctors is spearheading a COVID-19 testing effort in Pennsylvania’s largest city.

On our Commentary Page this morning, Opinion regular Dick Polman has six reasons for hope for Democrats skittish about Joe Biden. And a Philadelphia cardiologist looks at the promise that tele-medicine holds for reaching historically under-served communities.

Elsewhere.
Curbside pick-up starts at state liquor stores across the commonwealth. The Inquirer has the run down.
Masked mourners held a vigil at Point State Park for people who have died in Allegheny County Jail. The lockup has been plagued by suicide, Pittsburgh City Paper reports.
Latino leaders in Hazleton are pushing back against the anti-Hispanic rhetoric prompted by the COVID-19 outbreak, PennLive reports.

Counties that are home to more than a third of all state voters are calling for an all-mail in primary, the PA Post reports.
WHYY-FM goes inside the COVID-19 outbreak in Philadelphia jails, where inmates are ‘scared for their lives.’
Stateline.org talks to gun violence reduction advocates who are ‘celebrating victories on the NRA’s home turf.’
The USDA has rolled out a $19 billion aid plan, with most assistance targeted at farmers and ranchers, Roll Call reports.

What Goes On.
The House and Senate both convene for what we presume to be mainly virtual sessions at 1 p.m.
Here’s the committee action on tap for the day:

You Say It’s Your Birthday Dept.
Belated best wishes go out to our former PennLive colleague David Jones, and to Faith Curran, of Shelly/Lyons Communications in Harrisburg, both of whom celebrated on Sunday. Hope it was a good day for both of those fine folks.

Heavy Rotation.
Here’s a classic from Julian Cope that popped up on Sunday afternoon that just spoke to our mood at the time. It’s ‘World Shut Your Mouth.’

Monday’s Gratuitous Baseball Link.
MLB.com runs down the wildest 11 ‘forgotten’ team mascots. Anyone remember Phil and Phillis from the Phillies?