If you’re one of the growing number of Pennsylvanians who’s driving an electric vehicle, you’re going to want to put down your bagel and coffee for this one and maybe pick up an extension cord.

That’s because the Keystone State is in line to receive $171.5 million under the federal infrastructure law over the next five years to build out its EV charging network, according to the U.S. Dept. of Energy.

The tally is the fifth-highest of any state, and it’s part of the Biden administration’s effort to encourage Americans to buy electric cars, WESA-FM in Pittsburgh reported. The state is slated to receive $25 million this year toward augmenting the state’s existing network of 1,078 public charging locations, the radio station reported.

All told, Congress allocated $5 billion to expand the network of charging stations along the nation’s interstate highway system, the New York Times reported. The money won’t be enough to meet a surging need, but the White House hopes it will serve as a catalyst, the newspaper reported.

“We are modernizing America’s national highway system for drivers in cities large and small, towns and rural communities, to take advantage of the benefits of driving electric,” U.S. Energy Secretary Jennifer M. Granholm said in a statement. “The Bipartisan Infrastructure Law is helping states to make electric vehicle charging more accessible by building the necessary infrastructure for drivers across America to save money and go the distance, from coast-to-coast.”

The White House further plans to spend an additional $2.5 billion on chargers in rural areas or other communities where private sector operators might be reluctant to invest, the Times reported.

The money “will help us win the E.V. race by working with states, labor and the private sector to deploy a historic nationwide charging network that will make E.V. charging accessible for more Americans,” Transportation Secretary Pete Buttigieg said in a statement, according to the Times.

State officials already had been moving toward expanding the commonwealth’s charging infrastructure.

Last February, for instance, the state Department of Environmental Protection announced it had secured $936,000 in grant money to underwrite the construction of 16 additional fast charger installations across the commonwealth, the Capital-Star previously reported.

As of November 2020, there were more than 29,000 electric vehicles registered in Pennsylvania, according to the DEP’s Electric Vehicle Roadmap. 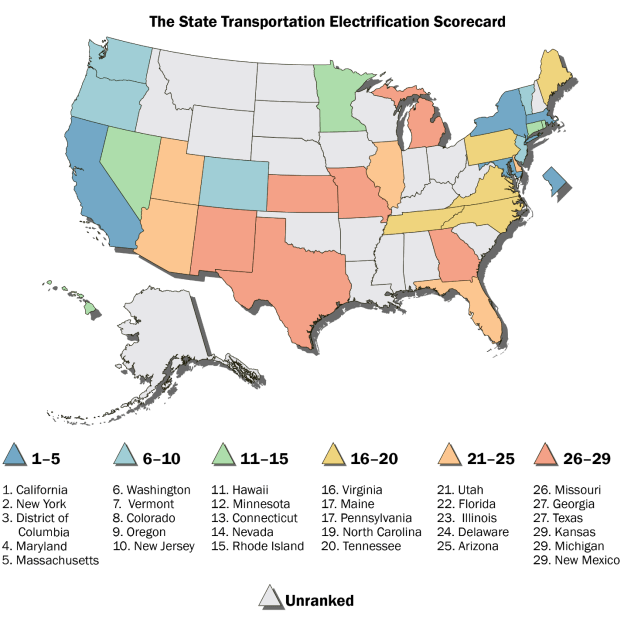 Environmental advocates welcomed the news of the influx of federal funding.

“Funding from the bipartisan infrastructure package is already on its way to help Pennsylvania ramp up clean electric cars, cut harmful pollution and create jobs in the process,” Mandy Warner, the Pennsylvania state director for Environmental Defense Fund, said in an email to the Capital-Star.

The funding is a “critical piece of the equation of 100 percent electrification of the transportation economy. The buildout of an EV infrastructure is essential to achieving that goal as it will make adoption of EV cars and trucks significantly easier,” Warner continued. “Electric vehicles are critical to reducing climate- and public health-harming carbon pollution, and Pennsylvania is well-positioned to get to work now to help clear the way for a clean, EV-powered economy in the state.”

Our Stuff.
Four GOP candidates vying to fill Pennsylvania’s U.S. Senate seat took the stage Monday night, giving voters a chance to see where they stand on issues ahead of the May 17 primary election

Pennsylvania’s former health secretary is taking a new job as the top lobbyist for the commonwealth’s biggest health system. Alison Beam, who was a top staffer for Democratic Gov. Tom Wolf before taking over the state Health Department in January 2021, will become the University of Pittsburgh Medical Center’s next vice president of government affairs, Stephen Caruso reports.

Looking to a more equitable future, Philadelphia’s Black developers are stepping up for their city, our partners at the Philadelphia Tribune report.

On our Commentary Page this morning: The future of the U.S. is on the ballot. Democrats must step up and defend it, opinion regular Fletcher McClellan writes in a strongly worded piece. And opinion regular Michael Coard wishes a happy birthday to Cheyney University, the nation’s oldest HBCU, which turns 185 this week.

Pittsburgh City Council is eyeing a move to allocate $12.8 million to a bus rapid transit project, the Tribune-Review reports.

LancasterOnline runs down where you can buy fasnachts on Fasnacht Day, Tuesday March 1.

A brand recall is exacerbating a baby formula shortage, the Citizens’ Voice reports.

The Observer-Reporter looks back at Harry Truman’s trip to Washington County in 1928 — years before he became a reluctant president.

WolfWatch
As is his custom, Gov. Tom Wolf does an 8:07 a.m. interview with KDKA-AM in Pittsburgh. At 4 p.m,. he’ll participate in a virtual event promoting civics education.

Heavy Rotation
Here’s one from Black Pumas to get your Tuesday off to a soulful start. It’s ‘Colors.’

As Pa. lawmakers evaluate the future of electric vehicles,… by Marley Parish October 5, 2021
Pa. House panel takes up electric vehicle charging… by John L. Micek June 7, 2022
How Pa. can get charged up for an electric vehicle future by Capital-Star Guest Contributor November 28, 2021