Good Monday Morning, fellow seekers.
The polls haven’t even opened in New Hampshire, but former South Bend., Ind., Mayor Pete Buttigieg is already looking ahead to the battleground states that helped deliver the White House to President Donald Trump in 2016.

On Sunday, the Democrat’s campaign announced it was launching a “six-figure digital ad buy on YouTube” in Wisconsin, Minnesota, Michigan, Pennsylvania, Maine, North Carolina, and Virginia, targeting voters in those counties that flipped to Trump after previously supporting former President Barack Obama.

The spot, called “Unity,” will run in 6-, 15- and 30-second versions across the video sharing platform starting Tuesday, Buttigieg’s campaign said in a statement.

As a montage of scenes across those states plays, Buttigieg, speaks in voice-over:

“Something is stirring in America right now. You can feel it. In the bluest counties and the reddest. In rural towns and industrial cities. When Washington has never felt further from our everyday lives. All standing together. And if you are ready to build an American future defined by unity in the face of our greatest challenges–this is our chance.”

Trump carried six states that Obama won in 2016: Florida, Iowa, Michigan, Ohio, Pennsylvania, and Wisconsin. In Pennsylvania, Trump carried 56 of the Keystone State’s 67 counties, winning primarily in the state’s vast, rural middle and the working-class southwestern part of the state. He also flipped Luzerne County, a blue-collar stronghold in northeastern Pennsylvania, that had been reliably Democratic.

By the time the votes were counted, Trump carried the Keystone State by 44,000 votes, or less than a percentage point, over Democratic nominee Hillary Clinton.

Buttigieg, who came out a putative winner in the muddled Iowa caucuses last week, has positioned himself in that middle ground between U.S. Sen. Bernie Sanders, I-Vt., who’s become a hero of the progressive left, and former Vice President Joe Biden, whom some Democratic voters see as the moderate alternative to Trump.

A Franklin & Marshall College poll released late last month showed Biden at the front of the 2020 primary pack among Keystone State voters, taking 22 percent support. Buttigieg finished well at the back of the sample of 628 registered voters, logging 6 percent support. Pennsylvania does not hold its primary, however, until April 28 — a lifetime away in what remains a volatile campaign.

With less than 48 hours to go before the polls open in New Hampshire, a WBZ/Boston Globe/Suffolk University tracking poll showed Sanders and Buttigieg within the margin of error, taking 24 percent and 22 percent support respectively.

In a statement, Buttigieg’s deputy campaign manager, Hari Sevugan, said Buttigieg is “best positioned” to win over exurban and rural voters who went for Trump in 2016, even as the eventual Democratic nominee [turns out] the base and “solidify our gains in the suburbs.”

The digital campaign will run on YouTube from mid-February through Super Tuesday on March 3 in the seven states, Buttigieg’s campaign said.

And in other news…
State Sen. Andy Dinniman, D-Chester, very quietly announced his retirement over the weekend. The long-serving lawmaker, who serves as the ranking Democrat on the Senate Education Committee, announced that he was dropping out of the race, and endorsing aide Don Vymazal.

In a statement first reported by PoliticsPA, Dinniman said family concerns prompted the “tough” decision not to seek re-election.

“This was a very tough decision, especially knowing just how many of you have already contributed your time and energy to my reelection campaign,” he said, “from fundraising to volunteering to circulating petitions. However, as I sit at Penn Presbyterian Medical Center with my wife, Margo, who is now recovering from surgery, we both came to the sudden realization this was not the time to run again.”

“It has been an honor to serve with Senator Dinniman since he was elected in 2006,” Costa said. “He’s been a passionate leader in the realms of education, animal rights and pipeline safety. He is a tireless advocate for every issue his constituents care about and his thoughtful, critical voice will be missed in our caucus and on the Senate floor.” 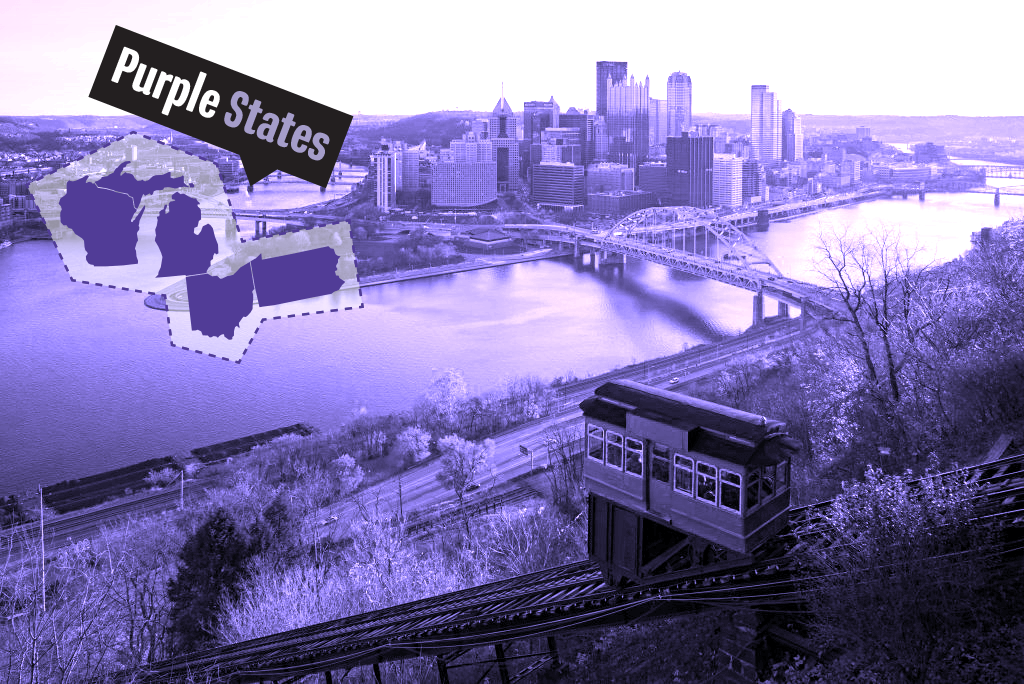 Our Stuff.
Speaking of the 2020 campaign, this Monday morning marks the start of The Purple States Project, a joint effort between the Capital-Star and our sibling sites, the Michigan Advance, the Wisconsin Examiner, and the Ohio Capital Journal.

From now until November, our four sites in the States Newsroom network will be taking an in-depth look at the issues, the people and the policies that matter to voters in the four states that could well determine who wins the White House.

We’re getting things rolling this morning with a column from your favorite newsletter author, dedicated to puncturing some of the Keystone State’s long-standing political myths and skewering the stereotypes that the national political press so often falls back on when they roll into Pennsylvania to start chronicling the campaign.

To do it, we not only turned to some respected political experts and observers, we also threw it open to you, the Capital-Star’s readers and supporters, to have your say. So this is you, being candid about the state that you call home.

Also, today:
Do behemoth nonprofit hospitals, such as UPMC-Pinnacle, really earn those sweetheart tax breaks? Some critics say ‘No way.’ Our partners at Stateline.org crack the hood and take a look.

From our partners at The Philadelphia Tribune: With 2020 off to a bloody start, Philadelphia City Council will hold a public hearing on gun violence on Tuesday night, at Christian Stronghold Baptist Church, on 4701 Lancaster Ave. in the city.

On our Commentary Page, opinion regular Dick Polman says Dems will feel the burn if they nominate Bernie Sanders in 2020. And Kathleen McHale, of SPIN, a Philadelphia-based provider of services to the intellectually disabled, says Gov. Tom Wolf and lawmakers need to close the early childhood education pay gap.

Deep in the heart of Pipeline Land, DelCo DA Jack Stollsteimer has created an environmental crimes unit, the Inquirer reports.
The Post-Gazette looks at U.S. Sen. Bob Casey’s, D-Pa., efforts on healthcare reform.
PennLive looks at pushback from the horse racing industry, now that Gov. Tom Wolf has announced plans to take money from its trust fund to pay for a college grant program.
The Morning Call has the details on the stalled push for property tax reform.

Philly Councilmember Cherelle Parker says city voters need to be heard on stop-and-frisk, WHYY-FM reports.
Democrats need to do a better job of engaging rural voters, U.S. Sen. Bob Casey, D-Pa., tells the PA Post.
Speaking of Casey, he and U.S. Rep. Chrissy Houlahan, D-6th District, are stumping for Joe Biden in New Hampshire, PoliticsPA reports.
Even before the Iowa debacle, caucuses were ‘on their way out,’ Stateline.org reports.

What Goes On.
Pretty much crickets this week. The House and Senate are both out of voting session until March 16 thanks to the annual break for budget hearings (which get underway next week). And there are no events on the docket for this Monday. So as Depeche Mode might suggest, enjoy the silence.

You Say It’s Your Birthday Dept.
Best wishes go out this morning to Eric Heisler, of the Bravo Group, and belated congrats to Philly comms guy Ben Waxman, who celebrated on Sunday.

Heavy Rotation.
Get your Monday off to a dance-y start with this 2012 throwback from Hosh. The song is called, appropriately enough, ‘WooHoo.’

Monday’s Gratuitous Hockey Link.
Winnipeg romped to a 5-2 win over Chicago on Sunday night. Not exactly the occasion for the Blackhawks’ Jonathan Toews to notch his 800th career goal. But these things happen when they happen.