Beware the red menace … erm … or something | Tuesday Morning Coffee

To hear President Donald Trump and some of our friends on the right tell it, socialists are the new American nightmare, lurking under every rock and crevice, copies of ‘Das Kapital‘ under one arm, their Billy Bragg records under the other, just waiting to topple American democracy.

Raising the specter of the admitted mess that is Venezuela, Trump vowed during his State of the Union address last week that “America will never be a socialist country.”

Except, of course, for all the low-grade socialism that gets committed every day across the United States government.

“Poppycock!” you exclaim, particularly if you are a character in ‘The Wind in the Willows.‘ “There’s no socialism in the United States!!”

Dig that Social Security you’re getting if you’re a senior? That’s some low-key socialism right there.

Taking advantage of that Medicaid? That’s also some low-key socialism, too.

Do you holler “Death to Obamacare, but keep your hands off my Medicare?” We hate to break it to you, but, yes, you, too, are enjoying the fruits of some low-key socialism.

Heck, every time torrents of wealth are transferred across government (which happens, approximately, every nanosecond in Washington D.C.) that’s also … you guessed it … socialism.

So it’s more than a little amusing to find the right wringing its hands now that democratic socialism, which has a lot more in common with Sweden and noted radical Tony Blair than Maduro’s Venezuela, is having something of a moment.

The Capital-Star’s Elizabeth Hardison catches up this Tuesday morning with two of the three democratic socialists who won elections to the Pennsylvania Legislature last November.But, rather than fomenting revolution, she finds Reps. Elizabeth Fiedler, of Philadelphia, and Sara Innamorato, of Pittsburgh, working the system, and waiting for their moment just like any other  freshman lawmaker.Here’s Innamorato, for instance, on Medicare-for-All: “It’s a very visionary policy. Will we get it through this session? Absolutely not. That’s unrealistic.”And here’s Fiedler on the undeniable numeric advantages boasted by Republican majorities in the House and Senate: “I can do the math in Harrisburg. I recognize the mathematical reality, and [that means] I am twice as strong in fighting for what my constituents want me to fight for.”Heavens. Sounds like revolution.Or like anyone else trying to do their job in this town.For the critics, we advise taking two “Les Miz,” and then join in the crusade in the morning. The rest of our stuff:
Associate Editor Sarah Anne Hughes went to the opening night of LG John Fetterman’s “Up in Smoke”  — er — recreational marijuana listening tour. Staff Reporter Stephen Caruso stopped by a budget hearing for the Independent Fiscal Office and found a proxy fight over Gov. Tom Wolf’s proposal to raise the minimum wage.On the Opinion side of the house, columnist Sean P. Quinlan argues that it’s not whether Pa. will have Medicare-for-All, but ‘when.’And in a new, ongoing feature called Both Sides Now, scholars from the Pennsylvania Budget & Policy Center and the Commonwealth Foundation debate Gov. Tom Wolf’s$34.1 billion budget proposal.  Elsewhere:The Inquirer has the tale of a South Jersey sewage plant that gets its energy from solar, wind, and… meatball grease. Which means, because Jersey,  it should be energy independent for the next 200 years. PennLive’s Charlie Thompson has his take from LG John Fetterman’s marijuana town hall.In Pittsburgh, the accused shooter in last fall’s Tree of Life massacre has been formally arraigned, The Post-Gazette reports.BillyPenn looks at how a community land trust is fighting gentrification in Philadelphia’s Point Breeze neighborhood. 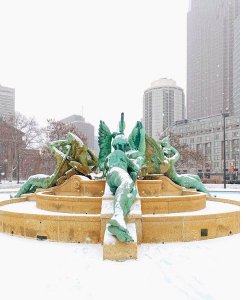 The Butler Eagle newspaper has dropped the syndicated ‘Non Sequitur‘ comic strip after its author, Wiley Miller, hid an anti-Trump insult in it, Pittsburgh City Paperreports.

Hundreds of Delaware residents sought the help of a mobile food pantry after getting some advice about how to use their food stamps in the event of another government shutdown, WHYY-FM reports.

WHYY-FM also takes a look at the confusion around Philadelphia’s new voting system.

It will not shock you to learn that Pa. Republicans aren’t on board with Gov. Tom Wolf’s proposed minimum wage hike, The Associated Press reports (via The Morning Call).

Stateline.org explains how pharmacy benefit managers have been swept up in the debate over drug-pricing.

Politico has the details on the ‘agreement in principle’ to avert a government shutdown.

In El Paso on Monday, President Trump took a few shots at Democrat Beto O’Rourke – who has yet to jump into the 2020 campaign (via Roll Call).

What Goes On.
Onaccounta the snow, all of state government is on at least a three-hour delay today.Enjoy that cup of coffee, folks.

Heavy Rotation.
Here’s an extended mix from Fatboy Slim. Play this one loud.

Tuesday’s Gratuitous Hockey Link.
The Pens beat Philly 4-1 Monday in the Battle of Pennsylvania. Pittsburgh’s Matt Murray made a career-high 50 saves on the way to the win.

Beware the red menace … erm … or something | Tuesday Morning Coffee