Donald Trump recently proclaimed “You people with this phony Emoluments Clause” while defending his already abandoned decision to hold next year’s G-7 summit at his Doral golf club.

Well, what shouldn’t come as a shock to anyone, the Emoluments Clause is not fake. It is located in our very real Constitution, in Article I Section 9 to be precise.

The problem is, of course, that Americans are as ignorant about the Constitution as he is. In fact, our collective ignorance about our foundational documents and American history is one main reason we ended up with Trump as president to begin with and why much of the country has been led down the dark path of authoritarianism. You see, as politically divided as this country is, a main cause of our present crisis is a failure in civics education.

We are a country divided. Geographically: Rural versus urban. The heartland versus the coasts. Socially and culturally: on abortion, gun rights, and immigration reform; and policy issues from healthcare to taxes. But no matter how much we disagree on these things, we should agree on one thing.

As the suburbs realign, Democrats have a victory — if they can keep it | John L. Micek

We don’t practice autocracy or oligarchy here. We believe in the principles and virtues of democracy or at least we’re supposed to. And we cannot support a leader who does not believe as well.

This shared belief in democratic principles should protect our people when confronted with a figure like Donald Trump. However, no matter how much we say we believe in democracy (a number which is actually declining), we have no real understanding of what our democracy looks like and so many of us don’t recognize when Trump attacks it.

Trump’s manufacturing boom has dried up. Here’s why that could cost him in Pa. | Wednesday Morning Coffee

To be sure, Americans are increasingly aware that our elections themselves are under attack through foreign election interference, voter suppression, and gerrymandering. However, our democracy is far more than just elections.

Indeed, the genius of our Constitution was creating a system that would protect our popular sovereignty from the abuses of concentrated power. And Americans are largely ignorant of that system.

Indeed, if the people don’t know what the three branches of government are, it’s doubtful they understand the importance of separation of powers and checks and balances as mechanisms to divide up power and make sure that power stays divided.

If the people don’t know that the First Amendment guarantees freedom of the press, it’s doubtful they understand that the press serves as the people’s eyes and ears to reveal government corruption and abuse of power.

And can you imagine if the Survey had polled Americans’ knowledge of the different Articles of the Constitution, including basic concepts like enumerated powers and the powers of the executive. I shudder at what we would have found. And our ignorance extends far beyond the Constitution.

According to a survey by the Woodrow Wilson National Fellowship Foundation “a majority of Americans in every state except Vermont would fail a test based on the questions in the U.S. citizenship test …”

This lack of civics knowledge represents a profound crisis to our democracy.

Indeed, if we really understood our democratic system of government would we support a leader that attacks the free press as the enemy of the people and threatens to change the very defamation laws that allow the press to report without fear of government reprisal?

Would we support a leader that pronounces that he can fire those investigating him and even pardon himself, a threat to the core tenets of the Rule of Law?

Would we support a leader that threatens to withdraw funding from “sanctuary cities,” a threat to the principle of federalism?

Would we support a leader that vows to fight “all the subpoenas,” claims Article II gives him the right to do whatever he wants, and calls the impeachment inquiry a “coup,” a fundamental threat to separation of powers?

Donald Trump’s candidacy should have ended the moment we understood his aversion to the Constitution, which was obvious during the campaign. Some of us surely saw this and didn’t care. But many others didn’t see him for who he is, and they still don’t. This is a function of many things, but one is a failure in civics education.

No matter how bad things are now, and they may get worse, America will emerge from this present crisis. What’s less clear is if we will be able to overcome our next brush with authoritarianism when the leader, from either the right or the left, is just as charismatic as Donald Trump, but competent and far more calculating.

One way we can prepare for this challenge is to recommit ourselves to civics education.

Daniel Miller is a lawyer, activist, and writer in Philadelphia. 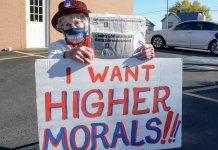 America needs to go back to school on civics education | Opinion

‘This is not a reality show, this is reality’: With two...