When a sitting president loses an election and the opposition party prepares to take over the federal government, we should not be surprised to see tensions and lack of cooperation between the two sides.

After all, the new occupants of the White House did not win the election without condemning the party in power.

For example, bitter feelings characterized the transition between outgoing president Herbert Hoover and president-elect Franklin D. Roosevelt in 1932-33. Hoover spent most of the time after the election trying without success to get FDR to endorse Hoover’s policies.

Frosty relations existed between President Lyndon Johnson and successor Richard Nixon in 1968-69, due partly to Nixon’s efforts to scuttle Vietnam peace talks during the fall campaign. The other reason was the incoming president’s insistence that Johnson not undertake any new policy initiatives during the transition without Nixon’s approval.

Johnson responded, famously, that the country can have only one president at a time.

Important work can get done during a presidential transition, even if the two men crossing paths do not get along. Jimmy Carter and Ronald Reagan were far apart ideologically and personally, but Carter worked tirelessly up to the morning of January 20, 1980 to free American hostages in Iran.

In 2021, tell your lawmakers to put Pa.’s people first | Opinion

Generally, successful transitions depend less on the attitude of the outgoing president and more on the purpose and organization of the new team. Despite differences with their opposite party predecessors, John F. Kennedy, Nixon, and Reagan devoted months to planning before Inauguration Day and their administrations hit the ground running.

Which brings us to President Donald Trump, who entered office in 2017 chaotically and is leaving the White House in shambles.

Except Trump wasn’t interested in a traditional transition process.

One week after the election, the president-elect fired his transition chairman, Governor Chris Christie of New Jersey, who had constructed a process similar to that of previous presidencies, and replaced him with Vice President-Elect Mike Pence.

From that point on, the transition process became a free-for-all among Trump family and friends, Trump donors and loyalists, conservative ideologues, and status seekers.

As the author Michael Lewis described in his book The Fifth Risk, meetings with Obama liaisons and civil servants were skipped, briefing materials ignored, warning signs disregarded, and bad decisions made.

As discombobulated as the Obama-Trump transition was, the Trump handoff to President-Elect Joe Biden is far worse.

Worse because Trump is still seeking to change the outcome of the election. Just last weekend, the president pleaded with the Georgia Secretary of State to change the vote count so Trump could win Georgia’s 16 electors.

Trump risked violating federal and state election tampering laws because all else has failed. He has not found any credible evidence of voter fraud. His legal team filed and lost over 60 lawsuits, including two before the US Supreme Court. State and local election officials, many of whom were Republicans, stuck to established laws and procedures to certify the results.

While Trump obsesses over his defeat, which becomes official this week, important work for the nation is not getting done.

The president doesn’t speak of the pandemic that has claimed over 350,000 lives and has not abated.

Trump has absented himself from a coronavirus vaccine rollout that so far is slow, haphazard, and inequitable. Almost certainly, no action will be taken against Russia for its mass hacking of government computers.

We have already seen abuses of the pardon power. More will come. The big question is whether Trump will pardon his family and himself.

The Trump national security team is not cooperating with Biden. Even former Secretaries of Defense wonder whether last-minute military actions are being planned.

Trump may be comforting himself with plans for revenge against Republicans who do not share his delusions of victory and for another run for the White House in 2024.

Starting Jan. 20, though, Trump has massive debt and legal exposure to deal with.

Surrounded by family members in legal jeopardy, sycophants, and lunatics, he will be looking for ways to cash in, delegitimize Biden’s election, and make Biden a one-term president.

Trump is making progress on the first two objectives, aided and abetted by Republican enablers, but Biden has a say on the third.

The former vice president has organized a professional transition organization. His intended appointees are qualified, experienced, and representative of the diversity of the nation. Having served eight years in the Obama White House, Biden will be ready to govern on day one.

Not a moment too soon.

Opinion contributor Fletcher McClellan is a  political science professor at Elizabethtown College at Elizabethtown, Pa. Readers may email him at [email protected]They can follow him on Twitter at @mcclelef. 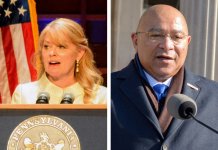 America needs a smooth Trump-Biden handoff. It’s not going to get one. Why that matters | Fletcher McClellan