State House Speaker Mike Turzai, R-Allegheny, was right about one thing as the state House went through its paces on this year’s $34 billion state budget: Debate on the document is deadly serious work, and the votes that House lawmakers took Tuesday, and the Senate will take today, are among the most consequential they will take all year.

In fact, there’s a pretty good argument to be made that the budget vote is the biggest vote that the 253-member General Assembly will make all year. And while there are votes of great importance on other matters, deciding how to spend the money that’s been entrusted to it by the taxpaying public is the Legislature’s central, and principal, duty.

So, given that context, it was no surprise to see emotions and tensions running high over the several hours of debate leading up to the 140-62 vote that sent the spending plan over the to Senate a little before 4 p.m.

A few observations, then, on some of the moments that particularly stood out.

1. House Speaker Mike Turzai: It’s right there in the job description. The Allegheny County Republican is the chamber’s presiding officer. Which means it’s up to him to keep debate moving along; to enforce the chamber’s Byzantine operating rules, and to rein in lawmakers (of both parties) when he feels like they may be roaming off the rhetorical reservation.

Intent on running a tight ship, Turzai cut off Democrats as they tried gamely to keep turning the argument back to the minimum wage, even striking their remarks from the record, as was the case with Democratic Whip Jordan Harris, of Philadelphia.

And while we don’t pretend to be experts on House rules, that seemed a bit much (Emails from the armchair parliamentarians amongst you in 5 … 4 … 3 … 2 …).

Yes, we know, it has something to do with rules about germaness, or the moon being in the Seventh House and Jupiter aligning with Mars. Or something.

But even as Democrats were kept on task, Republican members appeared (at least to our inexpert eye) to get a little more leeway.

We’re thinking specifically of the wet kisses that Reps Greg Rothman, R-Cumberland, and Seth Grove, R-York, tossed in the direction of the Trumpeconomy as they strutted and fretted their hour on the stage.

As he fended off some procedural broadsides from Democrats, including a motion to table the bill, Turzai did seem a tad rankled. But that comes with the territory. It was, after all, a serious vote.

2. Rep. Summer Lee, D-Allegheny: Remind us to never get into an argument with the Pittsburgh Democrat about, well, anything. In some pretty fiery floor remarks, Lee railed against the spending plan, charging (accurately, as it happens) that it left too many people in her district behind.

“This budget doesn’t even spare us an umbrella,” Lee said at one point, referring to the debate over whether to sock away roughly $200 million in the state’s Rainy Day Fund.

3. House Appropriations Committee Chairman Stan Saylor: With this budget, the York County Republican has fully embraced his role as the House GOP’s fiscal Dr. No.

“There are employers who can’t fill jobs,” Saylor told reporters during a late afternoon gaggle after Tuesday’s vote, as he explained away the sad death of the minimum wage hike.

As evidence, Saylor brought up the billboards he said he sees on his daily commute up Interstate 83 from York County.

There, employers are practically begging people to apply for openings, posting starting wages for all the world to see. But, Saylor says the key to getting people into those jobs is more training and (say it with us now) workforce development.

4. State Rep. Matt Bradford: If there’s ever been a guy who’s had to put on a happy face while his soul is slowly dying inside over a budget that everyone in his caucus hates with every fiber of their collective being, it’s Bradford.

But, then again, Bradford, the ranking Democrat on the House Appropriations Committee,
knows all about weathering difficult and awkward situations. 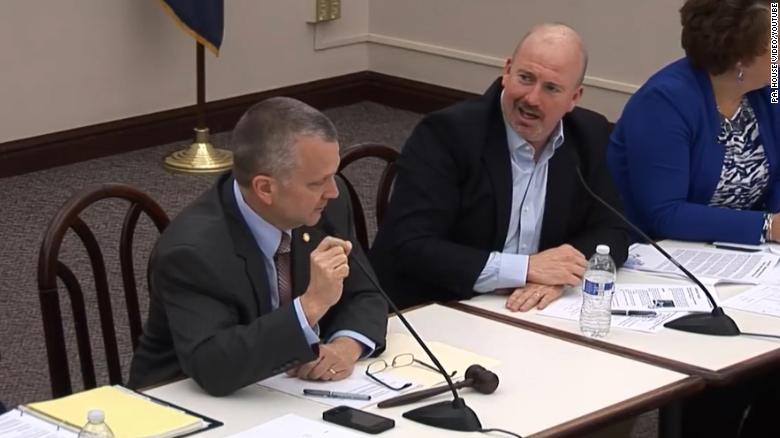 Stephen Caruso has all you need to know to get smart fast about Tuesday’s budget vote.

Sarah Anne Hughes explains what the Rainy Day Fund is, what it does, and why it matters.

Elizabeth Hardison rounds up reaction from educators to the spending plan.

And here’s our take on the debate over whether to raise the minimum wage and how it’s going to make the affordable housing crisis even worse.

Elsewhere.
The Inquirer asked a bunch of Pa. elected officials for their text messages: Gov. Tom Wolf deletes his, the newspaper learned.
Sexually explicit texts have forced the resignation of Pa. Republican Party Chairman Val DiGiorgio, the Morning Call reports.
The Tribune-Review parses the details of the UPMC/Highmark deal.

Some Philadelphia residents are calling for the shutdown of a refinery that burst into flames a week or so back, WHYY-FM reports.
Environmentalists have some thoughts about the budget – they’re not good.StateImpact Pennsylvania has the story.
The path to Democratic control of the state House runs through Allegheny County, a guest pundit at PoliticsPA offers.

What Goes On.
The House and Senate both convene at 11 a.m.
10:30 a.m., Main Rotunda: A ‘Chain In’ to ban child marriage. Participants will apparently wear wedding dresses and manacles to symbolize child marriage

WolfWatch.
A sure sign of budget end game: Gov. Tom Wolf has no public schedule today.