A view of the barricades in front of the Pa. Capitol building, Friday, 1/15/21 (Capital-Star photo by John L. Micek)

In the better than 20 years that I’ve been covering Pennsylvania politics, I’ve seen more than my share of protests at the maddening, frustrating, logic-defying, yet somehow strangely wonderful building that sprawls across the hill at the corner of Third and State streets in Harrisburg.

The vast majority of those protests have been peaceful. Some have ended in arrests — but always after peaceful resistance. They all have been noisy and colorful and thought-provoking. And, for the most part, they have been held by people of goodwill, who, though they may disagree on the means and methods, still believe that they’re trying to make this diverse commonwealth that nearly 13 million of us call home a better place.

My wife and I had some errands to run on Friday, and as we looped down State Street, heading east toward the Capitol, I held my breath a little bit at the sight of the orange barricades that you see in the photos that accompany this column.

Police across the country are bracing for armed protests at state Capitols across the country this weekend. According to the best information we have, the protest here in Harrisburg is supposed to start at 12 p.m. on Sunday. As NBC News reports, more than a dozen flyers are circulating online promoting pro-Trump rallies at state capitol buildings nationwide. 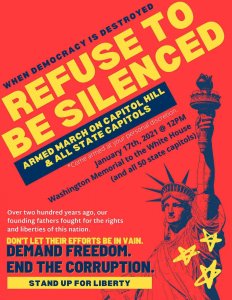 “Freedom is right,” one of them reads, according to NBC News. Another exhorts President Donald Trump’s remaining die-hard partisans to “refuse to be silenced.” A copy of a flyer sent to the Capital-Star is pictured at left.

Speaking to journalists on Thursday, law enforcement officials said there hadn’t been any specific threats against the Pennsylvania Capitol, but they were understandably exercising “an abundance of caution,” the Capital-Star’s Elizabeth Hardison reported.

I’m praying, with all that I have in me, that they end up being right. I’m praying that, after the conflagration in Washington last week that left five people dead, two of them U.S. Capitol police officers, another of them from Pennsylvania, that the incandescent anger that fired the rioters has burned out like a brush fire.

All the available evidence suggests that, tragically, may not end up being the case. But as I said, I’m praying and hoping for the best.

I could argue that the very premise of the rally is flawed. Democracy hasn’t been destroyed. While there may have been challenges and issues for some, the Nov. 3 general election was free and fair. And the results were later certified.

On Dec. 14, electors met in state Capitols across the country to cast ballots for the winners. And on Jan. 6, despite the spasm of violence that wracked our seat of government, Congress counted the ballots and declared President-elect Joe Biden and Vice President-elect Kamala Harris the winners. And on Jan. 20, God willing, there will be a peaceful transition of power, just as there has been since the birth of the republic. The prima facie evidence suggests that, far from being destroyed, our democracy, while flawed and imperfect, continues to function.

I could argue all those things. And some of you might agree. And those of you who intend to march on the state Capitol on Sunday will hurl invective and accuse me of treason or worse. That’s certainly been the indication of your sentiment based on the email I’ve been getting since Election Day.

So, rather than try any of that. I’d like to take another approach. I’d like to tell you about the building that’s been the center of my working life for going on 22 years now.

When I walked through the front doors for the first time in the summer of 1999, when ordinary civilians could still drive up the looping drive on Third Street and park right at the Capitol’s front door, I remember feeling like I’d made it. Covering politics was all I’d ever wanted to do, and after some years spent beating around the country, being given the weighty task of covering state government felt like crossing the goal line. And while I’ve worn a bunch of hats since, it’s never felt like anything less than my life’s work.

I remember my heart in my throat, just two years later, after murderers slammed jets into the Twin Towers and the Pentagon, and a planeload of heroes died in a field in Somerset County, that the Capitol never seemed more naked and vulnerable or exposed to attack. In days, it seemed, the building was secured. The public parking out front was gone. And metal detectors and cameras were a fact of life.

The 253 people who have served in the state House and Senate in those 22 years have reflected the broad swath of human experience.

Some were dedicated public servants. Some of them went to prison. Some served with distinction. Some took up space, collected their paychecks, and slunk into retirement. As I look around now, the membership of the General Assembly is more diverse than it’s ever been. And while we’re still a ways off, the goal of a government that looks like the people it serves seems more in reach than it ever has before.

In the summer of 2008, I got a rare tour to the very top of the Capitol dome. There are few things like being hundreds of feet in the air, with the gilded gold statue of Commonwealth standing just above you, to reinforce the guardianship and responsibility entrusted to the people in this building — elected officials and their staff, who, let’s face it, are the engine that really keeps government going.

Yes there’s been corruption. Yes, there have been disastrous policy decisions. And yes, to borrow from Churchill, I’ve seen our legislators finally do the right thing only after exhausting every other terrible option.

But I’ve also seen countless thousands of wide-eyed school kids come through the building. And maybe that up-close look at government has spurred them to help advance the public good.

I’ve seen couples get married at the bottom of the ornate steps in the main rotunda. Let me tell you, there are few things funnier, and more poignant, than seeing pitched battles over the state budget during the hottest days of summer come to a screaming halt so that two people in love can pledge themselves to each other.

I’ve been bringing my daughter to see the Capitol Christmas Tree every year since she was old enough to do anything. And, more than once, our little interfaith family has celebrated the lighting of the Capitol menorah. Ask me about Josh Shapiro’s skill at the hora some time.

I say all of this to remind you that, as angry as you might be about the election results, and as much as you might hate the system today, tomorrow the 253 men and women in this maddening but wonderful building could very well turn around and do something that helps you and your family.

So, please, if you’re going to march on Sunday, don’t break anything. Don’t hurt anyone.

Raise your voices. Protest. Exercise your constitutional right to free speech and free assembly. And then go home to your families knowing that you were heard.

And please remember, the Capitol is a building that belongs to every Pennsylvanian. It’s home for all of us. It’s a legacy we bequeath to our kids so that, someday, they can have their turn making this imperfect experiment a little bit better for all of us.