Rep. Malcolm Kenyatta is the first LGBTQ person of color to be elected to Pennsylvania’s General Assembly. It’s part of the reason the Philadelphia Democrat wanted the state House to recognize the 50th anniversary of the Stonewall Inn riots, a key moment in the movement for gay rights.

“My election is part of the reward of that work 50 years ago,” he told the Capital-Star.

On Thursday, Kenyatta’s resolution was one of nearly 30 deemed “noncontroversial” on the House’s uncontested calendar. He expected to speak on the House floor that evening or Friday.

But at the last moment, Kenyatta said, he found out that wasn’t going to happen.

The move appeared to be part of a new policy from House Speaker Mike Turzai, R-Allegheny, that sends all resolutions — controversial or not — to a committee for review. Under current House rules, resolutions deemed noncontroversial by the speaker, as well as the majority and minority leaders, are quickly considered by the chamber and do not have to go through the committee process.

On Friday, Rep. Greg Rothman, R-Cumberland, made brief remarks about the anniversary of the Tiananmen Square protests in June 1989 because he said his resolution was not going to be taken up.

Turzai told the Capital-Star that Kenyatta’s LGBTQ resolution had nothing to do with the policy change.

He said he went “back and forth” with Turzai’s office after some members of the House Republican caucus objected to the resolution as it was originally drafted.

“I blew up the whole process, but I thought it was critically important,” he said.

In the 1960s, the Stonewall Inn in New York City was a haven for same-sex couples — a place where they were able to dance together and be themselves in public. But the patrons still faced regular raids by police officers, who would make arrests, rough up people, and take bribes.

On June 28, 1969, the LGBTQ patrons decided enough was enough. They led a multi-day riot that transformed into a full-blown movement for visibility and equality.

“When people think about where the LGBTQ rights movement is now, I think it’s pivotally important that folks remember it was two trans activists of color and others that stepped up,” Kenyatta said, noting that at least 11 trans women of color have been murdered this year. “The same group that helped spark this movement for equality and equal justice, they’re still under deep assault.”

Kenyatta’s original resolution made reference to the “constant police harassment” Stonewall’s patrons were subjected to, the U.S.’s “significant progress toward ensuring equal rights for LGBTQ Americans,” and how June is Pride Month for the LGBTQ community.

Those references were removed in the second version of Kenyatta’s resolution, which was deemed “noncontroversial.”

On the 50th anniversary of the Stonewall Riots, iconic Philly journalist Mark Segal looks back — and forward

“I think if we can honor Hot Dog Day,” Kenyatta continued, referencing a real resolution that was also on the uncontested calendar, “we can honor the trans women and people of color and the LGBT folks who stepped up and sparked a movement that changed the course of history.”

That the Stonewall resolution was met with some opposition was not entirely surprising to Kenyatta, a freshman legislator. He noted that Pennsylvania has failed year after year to take up a bill that would extend housing and employment discrimination protections to people based on their sexual orientation and gender identity.

In the past, that legislation has been blocked most visibly by Rep. Daryl Metcalfe, R-Butler, who was previously chairman of the State Government Committee. As Billy Penn previously reported:

[Metcalfe] infamously refused to allow [Philadelphia Democrat Rep. Brian] Sims to speak on the House floor because of “God’s law,” called Sims a “lying homosexual,” and proudly declared his heterosexuality after a male lawmaker touched his arm. As a committee chair, Metcalfe has refused calls to bring up a bill that would extend discrimination protections to LGBTQ people. He also wanted to ban same-sex marriage in the state and sued a gay couple in Bucks County who sought to get a marriage license.

Kenyatta was able to make brief remarks on the House floor Friday before the chamber adjourned for a nearly three-month summer recess after finishing the budget.

“On today, that 50th anniversary, I would like to honor that legacy, honor Stonewall, and keep fight fighting for a more fair Pennsylvania and country.”

Here are my remarks. pic.twitter.com/OdZL8sGF5w 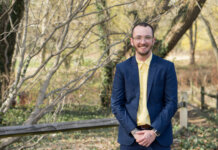 Why a Pa. House resolution recognizing the Stonewall riots didn’t happen on the 50th anniversary