In his 2018 collaboration with Kendrick Lamar, “Dedication,” the late Nipsey Hussle put down some lyrics that I’ve been coming back to ever since: “minor setbacks, major comebacks.”

Every time I recite those words, I not only relate them to my own life, but all those other people I hug, converse with, and turn to for advice on the regular. These are people who you would think go through minor setbacks because they walk with their heads high at all times, yet hold so much weight on their shoulders.

Julia Mallory and Madonna Awotwi, both of Harrisburg, are two such individuals. And like Nipsey and Kendrick, they’re both visionaries. They both love seeing their hometown make exuberant progress. And they’re both deadset on being taken serious in their chosen professions.

And they both go on living without their sons: Mallory lost her son, Julian Mallory, to gun violence; Awotwi’s son, Dontae-DeVahn Winfield, succumbed to natural causes.

I’ve known both women for years. Awotwi and I had previously worked together on poetry projects. And in 2013, I was blessed with the opportunity of mentoring Julian Mallory at the Camp Curtin YMCA in Harrisburg.

The deaths of their sons came just three years apart, and I knew these women I have grown to admire so much would need time to move on and survive.

On Oct. 30 at 7 p.m., at the Midtown Scholar Bookstore in Harrisburg, Mallory will share her experience, as she releases her new book, “Survivor’s Guilt.” Her friend, Madonna Awotwi, will be at her side, to help host an organic and much-needed conversation. 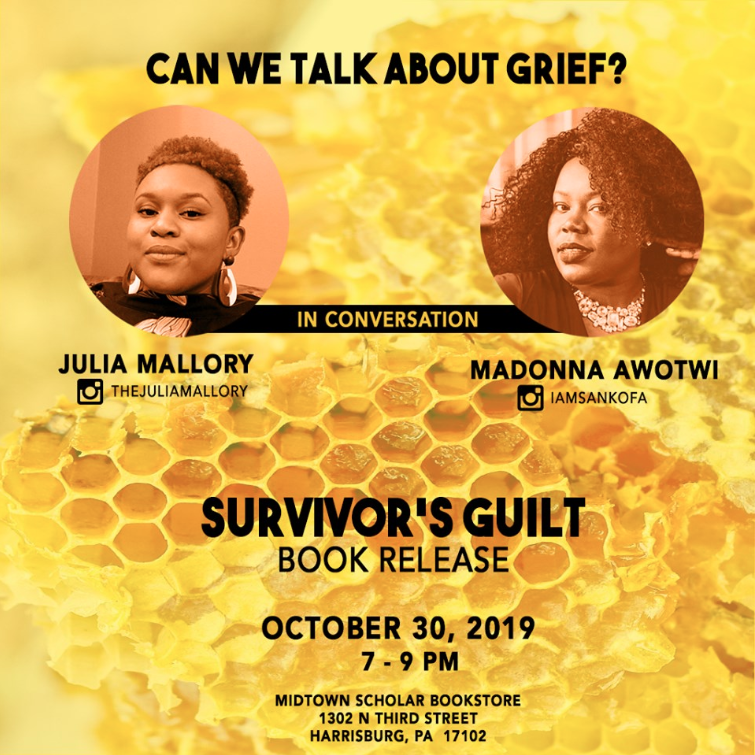 Mallory’s book is full of significant poems and essays that describe her journey and truth. While losing her son caused her significant survivor’s guilt, Mallory later found ways to accept and identify that guilt, which she says is an unhealthy emotion that keeps us trapped, resulting in depression and isolation.

People often choose to mask their trauma with falsified smiles and heavy workloads in order to avoid dealing with grief properly. But honesty and self-care is the biggest reward a person surviving PTSD or guilt can ask for.

Part of that reward is seeking the proper help which was something Awotwi told me didn’t come easily. Awotwi says overworking through grief was only short-term satisfaction.

The grief of losing her youngest son was still there and not seeking the proper help definitely hurt her process.

To get through it, Awotwi decided to listen to both hip-hop and an extended support system that includes her family and friends. She’s also seeking counseling, so that she can be the best parent she can be to her oldest son, who is similarly coping with loss.

Both Mallory and Awotwi understand surviving guilt is a different marathon for everybody. Still they hope that those who attend their event — and read Mallory’s book — will each find comfort, embrace their truth, and find a way to manage their grief effectively.

One thing nobody can do is put a time limit on surviving guilt or grief. But like Nipsey said, “dedication, hard work, plus patience” are great ways to start with the coping process.

And Mallory and Awotwi are doing just that.

Capital-Star opinion contributor Anwar Curtis, of Harrisburg, tells the stories of the people of Pennsylvania’s Capital City. His work appears biweekly. Readers may email him at [email protected].