Welcome to The Numbers Racket, an occasional Capital-Star feature offering deep, but user-friendly, dives into some important data.

We’re getting started today with an annual report on Murder and Extremism in the United States compiled by the Anti-Defamation League’s Center on Extremism. The 2018 data, overall, shows a sharp increase in murders by domestic extremists, particularly by right-wing groups.

“Every one of the 50 murders documented by the COE was committed by a person or persons with ties to right-wing extremism, although in one incident the perpetrator had switched from white supremacist to radical Islamist beliefs prior to committing the murder,” the report reads. 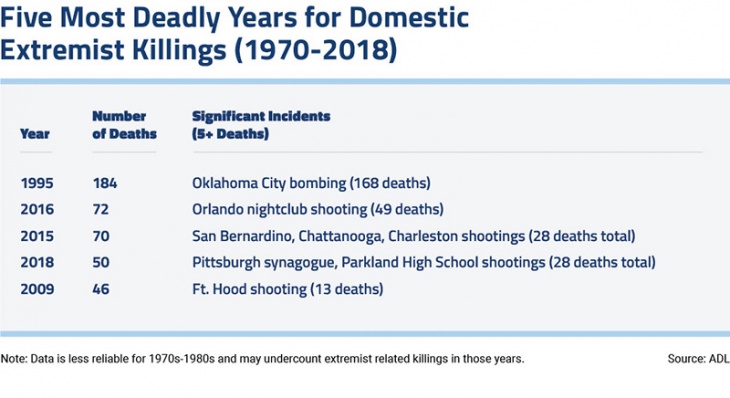 The report also stipulates up front that extremist killings comprise a relatively small number of the total number of homicides nationwide each year. But these incidents, such as the fatal rampage at Pittsburgh’s Tree of Life synagogue last October, “can send shock waves through entire communities — and beyond,” the report notes.

“Moreover, the deaths described here represent merely the tip of a pyramid of extremist violence and crime in the United States; for each person killed by an extremist, many more are wounded or injured in attempted murders and assaults. Extremists engage in a wide variety of other crimes related to their causes, from threats and harassment to white collar crime. Every year, police uncover and prevent a wide range of extremist plots and conspiracies with lethal intentions,” the report concludes.

The ADL’s interactive Hate, Extremism, Antisemitism and Terror (HEAT) Map, reproduced above, can be used to see reported incidents in specific geographic areas all over the country.

Here are your national top-line numbers: 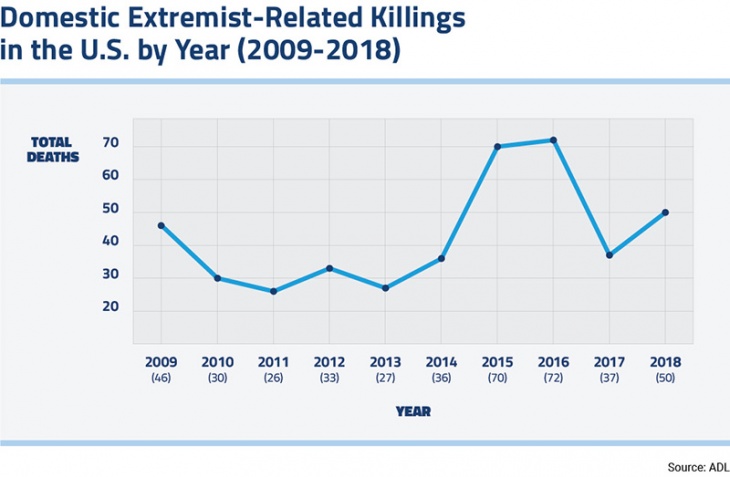 98 percent – That’s the percent of extremist killings last year that were attributable to right-wing groups. The tally is higher than in 2016 (21 percent) or 2017 (62 percent). In fact, right-wing extremists killed more people nationwide last year than in any year since 1995 — when the bombing at the Alfred P. Murrah Federal Building in Oklahoma City took the lives of 168 people.

164 – the number of overall extremist incidents in Pennsylvania in 2017-18, according to ADL data

At 49, Philadelphia, Pennsylvania’s largest city, led the pack in extremist incidents last year, the ADL report shows. The total was split between 35 anti-Semitic incidents and 13 instances of white supremacist propaganda. Pittsburgh followed at 13 incidents. The bulk came from eight instances of white supremacist propaganda and two extremist murders, including the Tree of Life shooting that claimed 11 lives and wounded seven more.

Harrisburg, the state capital, claimed six incidents in 2017-18. Allentown, Scranton, and State College all trailed at two incidents each, according to the report.