(This piece has been updated to correctly note Philadelphia Police Commissioner Danielle Outlaw’s age. She is 43 years old.)

“They say, ‘Oh, wow, she’s the boss,’” Outlaw, Philadelphia’s first full-time African-American female police commissioner, said. “Their parents say, ‘She’s the boss of all of these cops.’ You see the surprise and then you see the admiration. That is not lost on me. We are not raised thinking this is something we can be.”

Outlaw, 43*, appeared right at home sitting at the edge a conference table in police headquarters doing press interviews on Wednesday. She smiles significantly less than her predecessor. And she has a youthful look that would make it easy for her to tell someone she’s 10 years younger than she is.

But the youthful looks shouldn’t be mistaken as a sign that she doesn’t know what she is stepping into in Philadelphia. She knows that some will see her as an outsider. To that, she says that she has family here and adds that she “doesn’t see that as a difficulty at all.”

Outlaw is already well-versed in the city’s crime statistics and knows that many expect her to help bring down the homicide rate, which was the highest in 2019 that it has been in over a decade.

“I understand that, but I have to push back against that and say that I am only one person,” Outlaw said. “There is a lot that needs to be accomplished that cannot be done by one person alone or any one organization. A lot of this is the result of an inequitable distribution of wealth and it is not something that just law enforcement has a hand in. We’ll work collaboratively. It is a challenge that is going to take us working on it together. My approach is let’s work on it and let’s manage our expectations.

“This didn’t just happen, but I understand,” she continued. “But if anyone thinks that any one person is going to fix this problem, then they are setting that person up for failure.”

Much was made when the mayor was searching for a new police commissioner about the need to hire an African-American woman, not just because 70 percent of homicide victims in 2019 were Black men, but also because there have been a number of sexual misconduct suits logged against leaders in the department, including former top cop Richard Ross.

Mayor Jim Kenney selected Outlaw from a group of more than 30 candidates, and he stands staunchly behind her.

Outlaw earned a bachelor’s degree in sociology from the University of San Francisco and a master’s in business administration from Pepperdine University. She is a member of Alpha Kappa Alpha sorority.

She worked for many years in the Oakland, Calif. Police Department, and was formerly the top cop in Portland, Ore.

Outlaw knows many in the community wanted a Black woman to lead the 6,500-member police department.

“I have to make sure that I bring the perspective that I have as a Black woman to the job. I recognize that by sitting in this seat a lot of people look, at me and say, ‘I, too, can do that.’ You can’t be what you can’t see,” she said. “With that said, it’s disheartening that we are still having conversations about ‘firsts’ in the 21st century, regardless of which demographic I represent. There are so many others like me that all they need is a chance and an opportunity to take the seat because we are more than capable.

“But what I also must add is that when we take these positions … it’s important that we are set up to succeed,” Outlaw continued. “We are often given the opportunity to be in a position of influence when things are at their worst. And then if things fail, someone has the ability to say, ‘I told you so.’ We need to get to the point where this is normalized — to where we are no longer talking about everything from my hair to what I am wearing. This is what makes us, us. And if we say we value diversity, then this should be a no-brainer.”

Are Philly cops are doing enough to stop gun violence in communities of color?

Outlaw has some thoughts about how the city can successfully curb the crime and homicide rates.

She is a proponent of focused deterrence, the multi-pronged approach to fighting crime that, among other things, approaches homicide as a health issue and involves agencies outside of the police to help reduce violent crimes.

She is also a proponent, as are police chiefs in most large cities, of using data as a significant tool in combating all sorts of crimes.

Asked about supervised injections sites, she said, “Something has to be done because we are criminalizing people.”

But, she also said a supervised injection site “is not something that should be driven by police” and additional officers will be needed in the area when it’s up and running.

“There is a lot to do, a lot of work in front of us,” Outlaw said. “But we will get there. We will reach the shared and common goal we all want to arrive at. 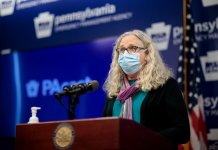 Too few GOP leaders put the lie to voter fraud until...