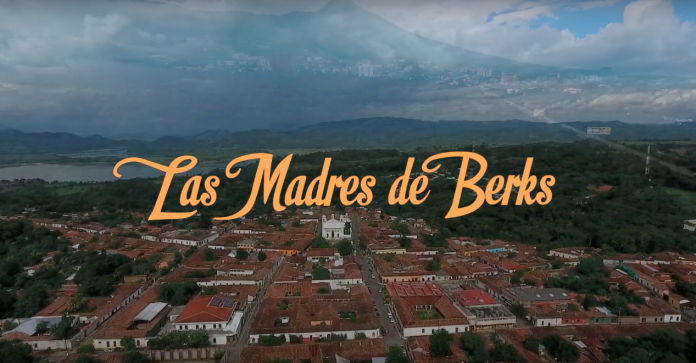 Surrounded by dozens of Picassos, about 50 people sat in an exhibit hall at the Susquehanna Art Museum in Harrisburg on Sunday evening.

But the attendees weren’t there for the famous artist’s work. Instead, they gathered to watch a half-hour documentary showcasing the stories of former immigrant detainees at the Berks County detention center.

Located in Leesport, just outside Reading, the facility is owned by the county and rented by the federal government to house families awaiting word if they will stay in America or be deported to their country of origin.

It is one of three facilities in the nation that holds entire families.

Ortiz started the project in 2013. It includes multiple works of public art throughout Harrisburg — including a mural on the Pennsylvania Capitol steps last fall that attracted the attention of Senate President Pro Tempore Joe Scarnati, R-Jefferson, who called it “entirely inappropriate.”

The murals feature the words and likenesses of mothers and children who were detained in the Berks Family Residential Center between 2015 and 2017. It is these individuals who Ortiz also tracked down to feature in “Madres.”

Ortiz said the film elevates and personalizes the story of Berks without causing more harm to detainees. Most of the former detainees appeared in the film anonymously, fearing another encounter with Immigration and Customs Enforcement.

The film follows four mothers’ flights from their sometimes dangerous home countries, including El Salvador, and internment by ICE, before they are transferred north to Pennsylvania.

Hope for a quick release turns into worry as the weeks and months drag on. The mothers, many of whom appear on camera anonymously, tell of unfeeling guards, a lack of medical attention, and the psychological trauma their children endured while detained.

In spring 2018, Ortiz tracked down three women and one older son in America to interview them about their experiences. She recruited another film crew in El Salvador to track down a deported mother and her son.

Ortiz featured the latter pair in both the documentary and her controversial Capitol mural — including a quote from the deported mother asking rhetorically “What would you tell your son if he asked, ‘Why can’t I be free?’”

Ortiz said she was inspired to tackle the project after seeing friends and family detained under former President Barack Obama — three years before the election of President Donald Trump on a platform of nativism.

The number of deportations overseen by the Trump administration is dwarfed by those during Obama’s tenure.

“The only difference is now people are paying attention,” Ortiz said.

Citing her home city of Philadelphia, the birthplace of America, Ortiz said that “we have all these images of freedom and democracy, but we have one of the most aggressive ICE facilities in the US.”

Reporting by the Philadelphia Inquirer and ProPublica last year found that the Philadelphia ICE field office “made more ‘at-large’ arrests of immigrants without criminal convictions than any of their 23 regional counterparts.”

As part of the project, Ortiz put a mural outside ICE’s downtown building in 2015 that read, “We are human beings, risking our lives, for our families & our futures.”

Ortiz wasn’t aware of the Berks detention center until that year. But after learning of it, she refocused her efforts on the facility.

She, like many activists, wants it to be shut down. After completing the documentary earlier this year, she’s been showing “Madres” across the state, including screenings in Reading, Lancaster, and Philadelphia.

This fall, she plans to show the film on three college campuses. The next phase of “Familias Separadas” will also include a zine that features drawings and messages from mothers on the lessons they learned in captivity.

She described a mix of people at showings, including some people who are familiar with what’s been going on at Berks and want to be more informed. Others “knew nothing.”

At the Harrisburg meeting, attendees heard from activists with Shut Down Berks, a grassroots group that agitates for the facility’s closure, as well as other immigration activists who gave impassioned pleas for the cause.

“We like to separate our issues, from health, to education, to mass incarceration,” Maria Alejandra Hernandez, of Movement of Immigrant Leaders in Pennsylvania, said. “With immigration, they are not separate.”

In the process, many attendees also expressed frustration with their elected officials for the lack of action on the center. Democratic Gov. Tom Wolf revoked a state permit in 2016 for the facility. Berks County has challenged the permit’s removal, and an administrative fight is ongoing.

Advocates regularly point to a memo from Temple University that concluded Wolf could evacuate the facility himself with an emergency removal order. But Wolf has said conditions within the facility are not bad enough to warrant such a move. He instead says only the federal government can only close the center down.

Looking forward, Ortiz said she’s hopeful that Pennsylvania’s political leaders will shut down the detention center so that the Keystone state can again be a leader in freedom.