A Philadelphia suburban Republican called the police to his home after a Democratic colleague launched into a late-night, curse-filled tirade against him in a phone call on Monday.

In a statement released Tuesday, Rep. Tom Murt, R-Montgomery, claimed that Rep. Brian Sims, D-Philadelphia, told him in the call that Sims would “ruin” Murt and that Murt was “finished.”

Murt, a seven-term lawmaker, is not running for reelection.

Murt said what sparked the call was unclear, but he speculated it was over a proposal he released this week for an LGBTQ bill of rights.

Sims “never actually articulated why he was so angry,” Murt told the Capital-Star. But “the rhetoric was so aggressive and belligerent, it was hostile, and of a threatening nature … in order to protect my family and my staff, I wanted to talk to a police officer,” Murt added.

It is unclear what will come of the police visit. Murt said he spoke with Upper Moreland Township Police Monday night, but did not elaborate on the status of his call.

“You’ll hear more about that in the future,” Murt said.

A spokesperson for the Montgomery County District Attorney’s office referred comment to the local police.

In a since-deleted tweet, Sims dismissed Murt’s description of the events.

“Lol in my entire life I’ve never said these things to Tom or anyone else,” Sims wrote. “I did make it abundantly clear to him that killing the effort to advance LGBTQ legislation in Pennsylvania with his weird campaign effort is something that I’d make sure advocates knew about. And they do.” 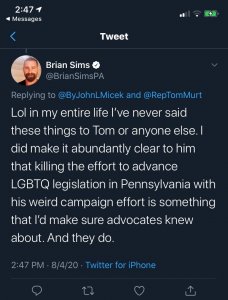 Sims did not respond to a request for comment.

The incident is the latest in a string of clashes between House Republicans and Democrats in the lead up to the divisive 2020 election. While Sims has often been at the center of these controversies, Murt is more of a newcomer.

The equality proposal seemingly at the center of the call is still unwritten, Murt told the Capital-Star.

But a memo outlining the bill said that the “LGBTQ+ community should have the same equal protections under the law and should not be discriminated against for who they are or whom they love.”

Signing onto the memo are two other House colleagues, one Republican, Rep. Wendi Thomas of Bucks County, and one Democrat, Rep. Pam DeLissio, of Philadelphia. Another Democrat, Rep. Kevin Boyle of Philadelphia, said he withdrew his name from the bill because Murt had not consulted with LGBTQ groups.

Murt said he had talked to stakeholders on the bill but declined to identify who he’s talked to.

He added that he’s worked with constituents and staff on the bill for months, and he has been considering including adoption rights, conversion therapy bans, hate crime language, and overall protections in public accommodations for LGBTQ individuals.

Sims was first elected in 2012, and is the first openly gay member of the General Assembly.

He’s made his name as a pugnacious progressive, known for slinging partisan barbs often peppered with profanity in viral videos and social media posts.

But he’s also engaged in behavior veering into harassment. In April 2019, for example, he posted a Facebook live video where he offered money to viewers if they successfully identified contact information for a group of three teenaged anti-abortion protesters in downtown Philadelphia.

The video brought him into the national spotlight, which he greeted with scorn. But a little less than half of his Republican colleagues signed onto a measure to censure Sims for the video. The push evaporated after he privately apologized to the women that October.

Some Capitol sources told the Capital-Star that Murt’s proposal smacks of Republicans using LGBTQ issues as a political football to signal moderation with about a dozen days of legislating left before the election.

Sims himself made the point in a social media exchange with fellow Philadelphia Democrat Rep. Malcolm Kenyatta, the House’s other openly gay lawmaker, Tuesday afternoon.

“When people pretend to care about Equality legislation that they’ve had all term to advance, just in time for the elections, and not in enough time to actually advance Equality,” Sims said.

Thomas’s name on the memo in particular raised eyebrows. The lawmaker, in her first full term, flipped a seat Democrats won briefly in a 2018 special election. Her district includes New Hope, a frequently-noted vacation spot for the LGBTQ community.

But others noted that Murt seemed unlikely to push something just for political gain, especially with an imminent retirement, and pointed to his long history as a champion for LGBTQ issues in the Republican caucus.

However, his support hasn’t moved his GOP colleagues controlling the General Assembly to take action to protect queer individuals’ rights.

Thomas, meanwhile, recently added her name to the former, and is not yet sponsoring the latter, according to the House’s bill database

Both Thomas and Murt voted in favor of equality when the House, in a May procedural vote, put the question up in a limited measure that only applies to shooting ranges. The measure fell two votes shy of passing.

Murt dismissed any political connotations of the exchange with Sims.

“Do you want to talk about what happened?” he asked rhetorically.

In a statement, Anne Wakabayashi, a Democratic political consultant and chair of Gov. Tom Wolf’s LGBTQ Commission, said that she understood Sims’ frustration.

“LGBTQ protections have been floundering in the Legislature for decades and we would welcome any allies with open arms into our fight to pass comprehensive nondiscrimination protections for LGBTQ citizens,” she told the Capital-Star.

Wakabayashi added that she appreciated Murt’s work on LGBTQ issues and would “encourage him” to recruit more support on the topic.

The exchange comes as tensions between Republicans and Democrats are high over COVID-19 and the state’s response, racial justice protests, and the oncoming 2020 election, when control of both the presidency and the House itself could be up for grabs.

Besides the doxxing incident, Sims has posted a photo of himself flipping off a camera directed at Vice President Mike Pence. Republicans seized on the post to run political advertisements against vulnerable Democrats in Trump-supporting districts.

‘The people of Pennsylvania expect better from us:’ Outrage-filled week punctuated with bipartisan call for civility

The exchange between Murt and Sims isn’t even the first controversy on LGBTQ issues in recent days,

Last week, Rep. Russ Diamond, R-Lebanon, co-opted a statement by State Health Secretary Dr. Rachel Levine made against transphobia into a defense of not wearing a mask.

He defended the rhetorical move by claiming being transgender is a choice. Psychiatrists disagree.

Wolf called for Diamond’s censure. Sims, once the target of such a measure, introduced a resolution to do so last Friday.

Speaking to the Capital-Star Tuesday, Murt, who described himself as an LGBTQ ally, said he had not read Diamond’s letter, only heard about it.

He added: “Secretary Levine is also a colleague and friend of mine, both personally and professionally, and I reject anybody who would mock or insult her or any member of that community.”

Up until the U.S. Supreme Court ruling in June, LGBTQ Pennsylvanians could be fired for their sexual preference and gender identity. The ruling provides some recourse, but activists caution that more work is needed.