They pointed to the use of rubber bullets and tear gas, and detainment of protesters.

Coard noted that in 1979, the Philadelphia Police Department became the first police department in the country to be prosecuted for systemic brutality.

“I’m talking about Philadelphia, PA, not a city in Mississippi, Alabama, Georgia,” Coard said. “The history of brutality didn’t begin in 1979, it began decades before that, but it was so egregious that the federal government had to step in and say you must end it.”

Coard and members of Up Against the Law — a collective of attorneys, legal observers, journalists and medics who support protesters — said the PPD has been repeating history over the past six days of protests.

Representatives of the PPD did not respond to a Tribune request for comment by press time, but on Wednesday, Commissioner Danielle Outlaw announced new policies related to use of force in protests.

If officers use physical force, they must report what type of force they used and when. If a commanding officer wants to use “less lethal munitions,” such as tear gas and rubber bullets, that officer must first get Outlaw’s authorization.

But the members of Up Against the Law said that’s not enough.

“When there is a full-throated outcry for justice against injustice, we must recognize the First Amendment rights of those protesters who have taken to the streets in expression of their First Amendment rights and not shock them with rubber bullets, or canisters or tear gas,” said Paul Hetznecker, an attorney with the group.

Officials must recognize that the “right to protest is at the forefront of our democracy,” Hetznecker said.

The members of Up Against the Law demanded that all police and National Guard troops immediately stop using rubber bullets, tear gas, armored personnel carriers and other military equipment. The group also demanded that police to stop kettling protesters — forming large cordons of officers and using those formations to block protesters into a specific area — during the coronavirus pandemic.

The group called for law enforcement to allow protected First Amendment activities to continue, and to “serve and protect the Constitutional rights of all Philadelphians rather than abuse them. They must allow Legal Observers, Medics, and journalists to do their job and not attack them. Also when releasing detainees after curfew the City must recognize that everyone supporting them, especially ride shares, medics, and legal support are performing an essential service and should be treated as such.”

The Collective’s attorneys said they are working pro bono on the protesters’ cases.

Ant Smith, an organizer with the Philadelphia Coalition for REAL Justice, was arrested at the demonstration in West Philadelphia last weekend and accused the PPD of trumping up charges as a form of intimidation.

“I was one of the many people in West Philly that [was] arrested, initially on these so-called riot charges, destruction of property charges and then it ended up being a curfew violation charge, and we see how arbitrarily the state is inputting all these things in to harass community members,” Smith said. “I was arrested along with some brother who was walking by randomly listening to music.”

Tory Smith, a legal observer with Up Against the Law, said another legal observer is currently recovering from a concussion they sustained after an officer hit them in the head with a baton while they recorded the information of a protester who was being arrested.

Ellen Seiter, a nurse, showed a red bruise on the front of her thigh that she got after she was hit with a rubber bullet.

“We were just standing there — at 52nd and Chestnut. It was a relatively calm moment,” she said. “People weren’t throwing things, weren’t yelling. [Police] didn’t even give us any kind of warning. They just shot.”

Members of Up Against the Law said 486 people were issued citations, but they didn’t know how many went to jail.

An organizer in the group said the people who were arrested were held in buses with no ventilation for anywhere from 12 to 48 hours. Attorney Marni Snyder said this furthers their risk of contracting the novel coronavirus. 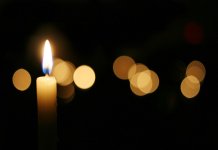 Philly to celebrate Transgender Day of Remembrance on Nov. 20