WASHINGTON — The U.S. House on Tuesday passed a bill that aims to give up to 2.5 million undocumented immigrants a pathway to U.S. citizenship.

The legislation — a top priority for House Democrats — would offer protections for undocumented immigrants who were brought to the United States as children and others who are currently without permanent legal status.

The “American Dream and Promise Act,” or, H.R. 6,  passed on largely partisan lines by a vote of 237-187. Seven Republicans broke ranks to side with Democrats to support the bill.

U.S. Rep. Brian Fitzpatrick, a Republican from Bucks County’s 1st Congressional District, crossed over to vote with Democrats to send the bill to the Senate. He was the only Republican member of the state’s congressional delegation to vote in favor of the bill.

The House vote comes after the Trump administration announced plans to end an Obama administration program to protect young immigrants — known as “dreamers” — from deportation.

The House legislation would also offer a pathway to citizenship for immigrants with temporary protections, known as Temporary Protected Status (TPS) and Deferred Enforced Departure (DED).

“Protecting Dreamers and TPS and DED Americans is about honoring the respect for family that is at the heart of our faith and who we are as Americans,” House Speaker Nancy Pelosi (D-Calif.) said at a press conference ahead of the vote. “There should be nothing partisan or political about this legislation.”

“President Barack Obama said it best: “This is about whether we are a people who kick hopeful young strivers out of America, or whether we treat them the way we’d want our own kids to be treated,” Dean wrote.

U.S. Rep. Brendan Boyle, D-2nd District, called the bill “a 21st century solution for families who have long made the [Pennsylvania] economy stronger and enriched our proud history of liberty and independence.”

House Democrats just passed the #DreamAndPromiseAct! This bill creates a fair process for Dreamers to earn citizenship. It's a 21st century solution for families who have long made the PA economy stronger and enriched our proud history of liberty & independence. pic.twitter.com/nU6EpqIIcc

“Our diversity is our promise and our district is home to immigrants from all backgrounds who enrich our community. Just a few moments ago, the House voted to keep that promise,” U.S. Rep. Mary Gay Scanlon, D-5th District, said.

According to data compiled by the Center for American Progress, Pennsylvania is:

Vanita Gupta, president and CEO of the Leadership Conference on Civil and Human Rights, accused the Trump administration of putting immigrants’ “lives in limbo” and called the bill’s passage “a historic moment for the nation and for each of the 2.5 million individuals who have built their lives here and deserve a long-term legislative solution.”

Our diversity is our promise and our district is home to immigrants from all backgrounds who enrich our community. Just a few moments ago, the House voted to keep that promise and #ProtectTheDream by passing the #DreamAndPromiseAct! https://t.co/JxFZeYyz4L

In a statement, Gustavo Torres, Executive Director of the immigration advocacy group, CASA, called on the Senate to pass the bill.

“We applaud members of Congress who today took a historic step to support some of the many immigrants contributing every day to our country,” Torres said. “We are living in a period of nativist tyranny emanating from the White House, burdened by a Republican Party that has zero moral compass.  Thankfully, Democratic legislators stood up for their constituents in passing a bill that reflects our values as a people.”

In previous years, legislative efforts to grant protections to undocumented immigrants who entered the country as minors have been bipartisan. But this effort appears unlikely to gain support in the GOP-controlled U.S. Senate, given the partisanship that currently defines the immigration debate.

Many House Republicans warned that Democrats were wasting their time on legislation that’s dead on arrival in the Senate, while others warned that it encourages immigrants to break the law.

“The latest decision by my Democratic colleagues to again turn a blind eye to the crisis on our southern border is troubling, but not surprising,” Joyce said in a statement released by his office. “We had a real opportunity today to give our Border Patrol agents the resources that they need to fight back against the efforts of the cartels to bring harmful drugs into this country, and instead we wasted it on a measure that will cost $26.3 billion and will only encourage more people to come to this country illegally.”

The White House has issued a veto threat against the bill. 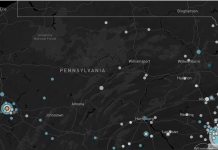