On the one-year anniversary of a deadly school shooting in Parkland, Florida, Pennsylvania lawmakers and activists renewed calls for a “red flag” law that would limit firearm access for troubled individuals.

Two state senators introduced bills to create an Extreme Risk Protection Order (ERPO) law, which would allow a judge to temporarily restrict a person’s ability to purchase or possess firearms if a petitioner could prove the person posed a danger to himself or others.

Both bills would require proof that an individual has a history of risky or dangerous behaviors, such as a recent act of violence or self-harm. The legislation also outlines the processes for accused gun owners to contest the order in court or move to have it terminated.

Rep. Todd Stephens, R-Montgomery, plans to introduce a companion bill in the House, according to a memo he issued last week.

The proposals were discussed during a Senate Policy Committee hearing at LaSalle University in Philadelphia on Thursday, where Senate Democrats heard from policy experts and gun control activists.

“[These laws] have been shown to reduce gun suicides in other states, and we need it here in Pennsylvania,” Christiansen.

Christiansen reminded the senators that bills were approved by House and Senate committees last year, but didn’t come up for full-body votes by either chamber.

Thirteen states have adopted red flag laws, and most went into effect in 2018, Anne Teigen, a policy analyst with the National Conference of State Legislators, said.

Even though the laws are new and research is limited, data show these measures do reduce gun homicides and suicides in most states, Tiegen said.

A 2018 study found that red flag laws reduced suicide rates by 7.5 percent in Indiana and 13 percent in Connecticut. And in Maryland, courts have found probable cause to seize firearms from 148 people since legislation passed there in October.

The nation’s earliest ERPO laws, in Connecticut and Indiana, were both subject to lengthy legal battles before being upheld by state appellate courts.

“These laws are very new, so people are looking at the anatomy and trying to see how it works best in practical terms,” especially as they relate to sharing information between law enforcement agencies, Tiegen said.

Similar proposals in Pennsylvania’s House and Senate drew the opposition last year of both the ACLU and the NRA, which argued the bills did not afford due process to accused firearm owners.

The General Assembly did pass one gun control reform last year: a bill that shortened how much time people accused or convicted of domestic violence have to turn over their firearms.

That success gives some activists hope that an ERPO bill, which is similar in spirit to the domestic violence law, will pass this term.

“We didn’t know we were going to pass the domestic violence bill last year, but its first time through the Senate the vote was unanimous,” Shira Goodman, a lobbyist with CeaseFire PA, told the Capital-Star earlier this month. “I feel like we can get to the votes if we can move the bills out of committee and get them on the agenda.” 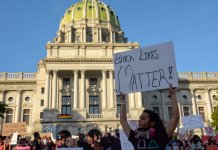