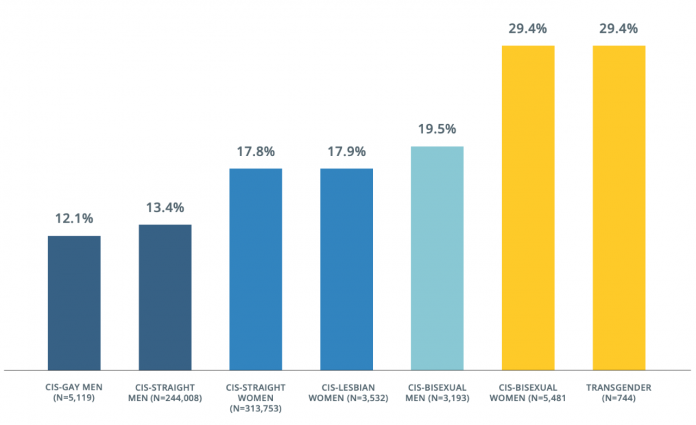 By Victoria A. Brownworth

PHILADELPHIA —  Late last month, right after the confirmation of U.S. Supreme Court Justice Amy Coney Barrett, Senate Majority Leader Mitch McConnell, R-Ky., adjourned the chamber until after the election. The Republican-controlled chamber left Washington without reaching agreement on a COVID-19 stimulus package that would have delivered relief to millions of Americans reeling from the economic aftershocks of the pandemic.

LGBTQ people have been especially hard hit throughout the economic recession that has accompanied the coronavirus pandemic.

A study by Human Rights Campaign and PSB Research in May found that 17 percent of LGBTQ people polled lost their jobs because of COVID-19, compared to 13 percent of the general population.

For LGBTQ people of color, the numbers were even more disproportionate: 22 percent reported losing their job because of the pandemic, compared to 14% of white LGBTQ people polled.

In addition, 42 percent of LGBTQ people reported their economic status was “somewhat or much worse off now than one year ago,” compared to 36 percent of non-LGBTQ people.

A 2018 report from the Center for American Progress found LGBTQ people are more likely to rely on federal assistance programs, like the Supplemental Nutrition Assistance Program (SNAP).

A new 65-page report by the Williams Institute at UCLA School of Law details the roots of poverty among a diverse population of low-income LGBTQ people in California.

“It is significant that the majority of LGBTQ people in our study first experienced poverty during childhood,” said lead study author Bianca D.M. Wilson, Senior Scholar of Public Policy at the Williams Institute. “This indicates that one of the most effective ways to address LGBTQ poverty may be to target economic instability in families and communities rather than focusing only on LGBTQ adolescents and queer adults.”

According to the report, “More than a decade of empirical research has shown that LGBT people in the United States experience poverty at higher rates compared to cisgender heterosexual people. Research has also shown that transgender people and cisgender bisexual women experience the highest rates of economic insecurity.”

The study participants were 19 to 70 years, with an average age of 39. 77 percent identified as people of color, and 38 percent were transgender or gender nonbinary. 97 percent identified as a sexual minority (LGB or other identity, such as pansexual or queer). 32 percent had a high school education or less, 70 percent had an annual household income of $20,000 or less, and 61 percent were unstably housed in the past year.

The study found that childhood poverty led to adult poverty among LGBTQ people, with 73 percent reporting experiences of economic insecurity when they were children. At least 80 percent of Native American, Black, and Latinx respondents reported economic insecurity as children, compared to 50 percent of White and Asian Pacific Islander respondents.

For LGBTQ people who did not grow up in poverty, anti-LGBTQ bias and familial rejection, mental health issues and/or substance abuse issues were contributing factors in their adult poverty.

“Past research has shown that cisgender gay and bisexual men as a group tend to experience lower rates of poverty than other LGBTQ subgroups,” said study author M.V. Lee Badgett, Distinguished Visiting Scholar at the Williams Institute. “However, this study underscores the unique and significant challenges cisgender gay and bisexual men who are experiencing poverty face in order to survive.”

The report is part of a larger study called the Pathways to Justice Project, which “aims to understand the experiences of LGBTQ adults living in poverty and the community and policy actions needed to improve their lives.” The Pathways Project describes their work as “including the largest qualitative dataset of interviews with LGBTQ people focused on their experiences with economic instability. The narratives from the LGBTQ people who shared their experiences with us will remain a significant resource for understanding what poverty looks like for this community — how people navigate it, what factors lead to it, and what barriers exist to getting out of poverty.”

The narratives of people in the Williams Institute study combined with the details in the Human Rights Campaign study show how integral the housing issue is for LGBTQ people facing poverty.

Unemployment data released by the Bureau of Labor Statistics does not include information on sexual orientation or gender identity. But the narratives of the people in the Williams Institute study are definitive: discrimination has been a factor for most of them.

Major demographic surveys, such as the 2020 census, do not include questions about sexual orientation and gender identity. The lack of government data on LGBTQ people limits researchers, which in turn limits help.

“Without federal, state and municipal data collection efforts, non-profits and advocacy groups are having to step in and do this data collection on their own and having to cover the costs,” said Ty Cobb, senior director of research and strategic initiatives at the Human Rights Coalition.

The pandemic and the economic crises it has engendered could force the government to address people in poverty, including LGBTQ people. The Biden-Harris campaign has plans to help people in poverty. Those plans are critically important, particularly now, in the midst of the COVID-19 pandemic.

Victoria A. Brownworth is a reporter for the Philadelphia Gay News, where this story first appeared.