A protesters picks up fake money from the Capitol floor during a protest calling for a vote on a bill to ban gifts to lawmakers on September 29, 2020. (Capital-Star photo by Stephen Caruso)

After months of quiet hallways, the Pennsylvania Capitol echoed with the voices of the people Tuesday with two separate rallies, from two groups seeking very different things.

Outside, on the Capitol steps, a crowd of mostly Republican lawmakers and their allies rallied in support of gun rights and against attacks on the Second Amendment.

Inside, reformers gathered at the door of a powerful lawmaker’s office to call for a long-sought gift ban for legislators.

What did they have in common?  Both groups were speaking out on issues where the 253-member General Assembly has shown very little inclination to tinker with the status quo.

But where the protesters inside said that the status quo — allowing lawmakers to accept gifts from lobbyists — was untenable, the rally goers outside were rooting for inaction.

Despite rain, the gun rights rally got rolling first. It featured at least two dozen lawmakers who argued for the need for gun rights — rights enshrined in both the U.S and state Constitution.

In previous years, the ranks of the attendees at the 2nd Amendment rally, hosted by Rep. Daryl Metcalfe, R-Butler numbered in the hundreds, if not thousands, some even openly carrying AR-15s. But few rifles, outside of an old bolt action with a bayonet, were present Tuesday among the crowd of roughly 100. 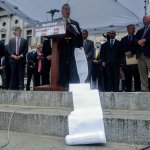 A sheet of paper with every gun control bill authored in the Pennsylvania General Assembly rolls to a stop beneath, Kim Stolfer, president of Firearms Owners Against Crime, a Pennsylvania-based gun rights group, during a rally on the Capitol steps on Tuesday, September 29, 2020. (Capital-Star photo by Stephen Caruso) 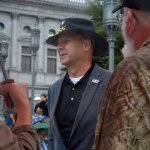 Sen. Doug Mastriano, R-Franklin, speaks with attendees on the Capitol steps of a rally for gun rights on September 29, 2020. (Capital-Star photo by Stephen Caruso) 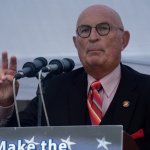 Rep. Harry Readshaw, D-Allegheny, was the only Democrat to appear at a gun rights rally on the Capitol steps Tuesday, September 29, 2020. He is retiring at the end of this year. (Capital-Star photo by Stephen Caruso) 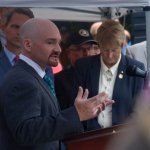 Joshua Prince, a 2nd Amendment law attorney, speaks at a rally for gun rights on the Capitol steps on Tuesday, September 29, 2020. (Capital-Star photo by Stephen Caruso) 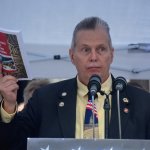 Kim Stolfer, president of Firearms Owners Against Crime, a Pennsylvania-based gun rights group, holds up a book of firearm laws during a rally on the Capitol steps on Tuesday, September 29, 2020. (Capital-Star photo by Stephen Caruso) 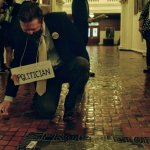 A protesters picks up fake money from the Capitol floor during a protest calling for a vote on a bill to ban gifts to lawmakers on September 29, 2020. (Capital-Star photo by Stephen Caruso) 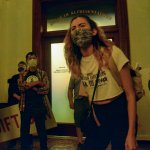 Rachel Murphy, a 24 year old Philadelphia resident with activist group March on Harrisburg, leads a chant in the Capitol building calling for a vote on a bill to ban gifts to lawmakers on September 29, 2020. (Capital-Star photo by Stephen Caruso) 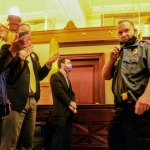 Activists with March on Harrisburg wait for House Majority Leader Kerry Benninghoff, R-Centre, in his Capitol office on September 29, 2020. They hoped he would call up a vote on a bill to ban gifts to lawmakers. March was advocated for such a bill for four years. (Capital-Star photo by Stephen Caruso) 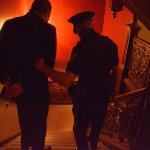 A protester with March on Harrisburg is led away in handcuffs after entering House Majority Leader Kerry Benninghoff’s Capitol office on September 29, 2020. He is one of four detained during a protest asking for a vote on a bill to ban gifts to lawmakers. (Capital-Star photo by Stephen Caruso)

Standing out from the mostly Republican crowd was one Democrat: retiring Rep. Harry Readshaw, of Allegheny County.

The 26-year veteran lawmaker has a long record of voting for gun rights, including opposing a 2018 bill to restrict convicted domestic abusers’ access to firearms.

Recognizing that he represented a dying breed of Blue Dog Democrat, Readshaw warned the crowd that a changing of the guard in the General Assembly could hurt their cause.

As for advancing gun control, the Republican majority has focused instead on increasing penalties for gun crimes rather than increasing barriers to purchase.

But groups such as Everytown for Gun Safety have already promised to spend $1 million in Pennsylvania to flip GOP-held seats in the hopes that Democratic majority would pass strict gun laws.

That’s what happened in Virginia, where the newly Democratic General Assembly passed a raft of laws, including universal background checks and an extreme risk protection order, which allows a judge to strip an individual’s firearms if they threaten violence.

The specter of Virginia loomed over the day.

“I want you to realize the type of fight and commitment you have to have,” said Kim Stolfer, president of the gun rights group Firearm Owners Against Crime. “Turn off the NFL, and do something about this.”

At each other’s throats?

The protest called for the House to hold a vote on a bill to ban gifts to lawmakers and other public officials.

Under current law, it is legal for lobbyists to buy lawmakers dinners, give them tickets to events, or any other gifts in the course of communicating on policy and legislation. And unless the price tag adds up to over $250, it does not have to be reported.

Ethics forms from 2019 show at least $83,000 in travel among other gifts to lawmakers, according to the Associated Press.

The protesters held signs, sang “you take bribes, the people die,” and watched one of their ranks, dressed as a lobbyist, order around and throw fake money at another, dressed as a politician.

In particular, the protesters took aim at the General Assembly’s slow pace in addressing everything from health insurance to the minimum wage to COVID-19.

The Republican-led House and Senate have passed a slew of bills reopening parts of the economy or restricting Gov. Tom Wolf’s authority to address the pandemic. Wolf has, in return, vetoed almost a dozen such bills, addressing everything from sporting events to real estate sales.

"Looks like all we have left to do is name a state reptile, pass 50 resolutions honoring high school sports teams, and rename some old bridges," says the "politician."

This legislative dysfunction, the protesters alleged, was due to the lack of a gift ban.

Four protesters, including March on Harrisburg executive director Michael Pollack, entered Benninghoff’s office after about a half hour of protest. Twenty minutes later, they were led out in handcuffs.

According to a spokesperson for the Department of General Services, which manages the Capitol Police, the protesters were charged with simple trespass and were released.

This isn’t the first time March on Harrisburg protesters have been arrested for raising their voices over the gift ban. In May 2019, some activists showered the House floor with dollar bills.

Then-House Speaker Mike Turzai, R-Allegheny, met with the protesters and backed the gift ban. It was advanced out of committee last November.

Since, the bill has languished in legislative purgatory under House Speaker Bryan Cutler, R-Lancaster, and Benninghoff.

Jason Gottesman, a spokesperson for Benninghoff, said the bill was still under discussion.

“There are a number of priorities on any given day,” Gottesman said. “We are not saying this isn’t a priority, but again, but it’s something that requires an in-depth conversation [and] more review.”

He added that Benninghoff had offered to meet with March on Harrisburg Tuesday, but the group had not responded with a time that worked.

Rachel Murphy, an activist with March on Harrisburg, said after the arrests that the group planned to continue to protest until it had a written promise and date of a vote on the gift ban bill.

The two sets of rally goers did briefly interact. Some Second Amendment supporters, clad in gear for President Donald Trump, joined in when gift ban protesters chanted to “drain the swamp.”

Later, after the arrest, a few talked civilly about constitutional rights and institutional racism. There appeared to be more agreement then either group realized.

“Ya’ll are supposed to be at each other’s throats,” one Second Amendment supporter joked.