(This story was updated at 5:05 p.m. on 6/10/20 with additional comments from Pennsylvania lawmakers)

“I can’t tell you the kind of pain you feel when you watch something like that. When you watch your big brother, who you looked up to your whole entire life die, die begging for his mom,” Philonise Floyd testified at a U.S. House hearing on police reform.

For Ahmaud, Breonna, George, their families & our communities all too familiar with their pain — we must demand justice & fight for change. At 10AM, I’ll be joining @HouseJudiciary colleagues for a hearing on police brutality & racial profiling. https://t.co/EjbMrDPu2f

He implored lawmakers: “Honor George and make the necessary changes that make law enforcement the solution and not the problem.”

“Our hearts and those of every thinking and feeling American are with you and your family,” Scanlon told Floyd today at the hearing. “We’re committed to making the changes that we need to ensure that you, your family and every family in this country receives the equal justice and the security that our Constitution and our most essential American values demand.”

Dean said at Wednesday’s hearing that “if anybody has a doubt as to systemic racism in this country, as to inequality based on race in this country, you can look no further than between me and my friend and colleague [Georgia Democratic Rep. Lucy McBath].” McBath’s son, Jordan Davis, was shot and killed when he was 17 during a dispute about loud music.

“I’m the mother of three white sons,” Dean said. I’ve never had to have ‘the talk,’ she said, referring to Black parents teaching their children how to interact with police. “You were the mother of beautiful Jordan Davis,” Dean told McBath. “You had to have the talk.”

U.S. Rep. Mary Gay Scanlon, D-5th District, said lawmakers gathered Wednesday to “confront the harsh truths about racism in our country and the law enforcement practices that have allowed police violence against communities of color, especially black individuals, across the country.

“The murders of George Floyd, Breonna Taylor, Ahmaud Arbery, Tony McDade have once again brought these truths to the surface—that centuries of systemic racism – and inaction — have resulted in a justice system that harms black communities, and policing practices that disproportionately kill black Americans,” Scanlon said.

Vanita Gupta, president and CEO of the Leadership Conference on Civil and Human Rights, called the new legislation “Congress’ most comprehensive effort in decades to substantially address police misconduct.”

But while she welcomed law enforcement legislation, “policing reform alone is not going to solve the crisis that we’re in today,” she said. She urged leaders to “envision a new paradigm” that involves shrinking the footprint of the criminal legal system in the lives of people of color and increasing investment in social services.

“When we stop using criminal justice policy as social policy, we will make communities safer and more prosperous,” Gupta said.

WATCH: Powerful testimony from Philonise Floyd, the brother of George Floyd, who was killed by Minneapolis police officers on May 25, 2020 before @HouseJudiciary for hearing on Policing Practices and Law Enforcement Accountability: pic.twitter.com/WAG7ftlPup

Although House Democrats are expected to pass the wide-ranging police reform bill in the coming weeks, it faces dim prospects of clearing the GOP-led Senate. There, Senate Majority Leader Mitch McConnell has asked Republican Sen. Tim Scott of South Carolina to take the lead on a police reform package.

Scott wrote on Twitter Tuesday that he would soon release details on a police reform and retraining package. “I am hopeful that this legislation will bring much-needed solutions,” he said.

Democrats calling for massive overhauls are urging their colleagues to fundamentally rethink the nature of policing.

Rep. Karen Bass, a California Democrat and the chair of the Congressional Black Caucus, told lawmakers Wednesday that if the Democratic-backed bill had been law, “George Floyd would be alive because chokeholds would be banned.”

Breonna Taylor, who was killed by police officers in Louisville, Ky., in March, “would be alive because no-knock warrants for drugs would be banned,” Bass added. Tamir Rice, a 12-year-old killed by police in Cleveland in 2014, “would have graduated high school this May.”

President Donald Trump and GOP congressional leaders are seizing upon the “defund the police” movement to attack Democrats as the November elections approach.

“I think that, if anything, the murder of George Floyd demonstrates the need to invest more in our police departments,” he said.

“We should focus on improving training to promote good police practices. We should also be providing mental health care, especially for those who are struggling with PTSD and other job-related stresses. Additionally, we should work to build stronger bonds between law enforcement and the communities they serve. We can start by having school resource officers in our schools,” Reschenthaler said.

Trump praised Jordan’s comments on Twitter Wednesday and used the opportunity to slam the Democratic presidential nominee. “This Radical Left agenda is not going to happen. Sleepy Joe Biden will be (already is) pulled all the way Left. Many, like Minneapolis, want to close their Police Departments. Crazy!” Trump tweeted.

There’s a debate among advocates who want to “defund the police” about exactly what that would mean. Some are calling for steep cuts to police budgets while channeling that cash into social service programs; others want to eliminate police departments entirely.

Biden’s campaign told The New York Times this week that he is opposed to cutting police funding and believes more spending is necessary to help improve law enforcement and community policing.

Democrats accuse the GOP of using the debate to distract voters.

Sen. Sherrod Brown, an Ohio Democrat, told reporters on Wednesday that Trump and congressional Republicans “are going to play with that term ‘defund the police’ as if Democrats want to eliminate police departments. That’s clearly not true, but that’s what they’ll say.”

Brown added, “Defunding police doesn’t mean we disband police departments. It doesn’t mean we don’t spend money for law enforcement. It means we start thinking more about training police, about discipline, about making sure that mental health services are available in communities and some things aren’t police work that have kind of been defined that way.” 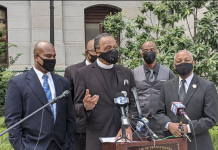 In Philly, Black clergy warn voters of color will face challenges casting their ballots in November

George Floyd’s brother: ‘Make sure that he is more than another face on a t-shirt’